Ange the culprit? The identity crisis of the Socceroos

Ange Postecoglou is at the crossroads of his Socceroos coaching tenure. After failing to obtain direct qualification to the 2018 Qatar FIFA World Cup, he has been singled-out by many as the major culprit.

However, is such critical analysis warranted?

The current criticisms pointed toward Postecoglou generally fall under the following accusations.

1) Persistent in deploying a formation with three in the back despite the ongoing struggle;
2) Inability to get the right result when it matters

Simply, these two accusations are irrefutable.

When the team needed a win in Japan (or a draw as a bare minimum), they failed to do so. The attack during rare sustained period of possession was cumbersome. Players tended to take one too many unnecessary touches before releasing it.

Support in counterattack was non-existent despite knowing that these opportunities present the best chance to score. The defence was riddled with turnover, and Matt Ryan’s erratic distribution didn’t add any confident to the backline.

The end result against Thailand was part unlucky and part naivety. The unlucky was the number of times the Socceroos hit the woodwork. However, luck, or the lack of, is never an excuse. In football, players make their own luck.

No one in a gold shirt attempted to create their own luck with sufficient frequency on Tuesday night. More importantly, the team’s reckless wastefulness in the final third wasn’t due to the lack of luck.

The accusation of naivety rests on Socceroos’ tactical approach. Despite the clear height advantage compared to the Thai defenders, it was surprising to see such a limited supply of long balls into the box. Even when there were long balls, they were often too late (so that the defenders were able to settle and crowd out the box) and lacking in quality.

Cahill’s deep positioning was equally baffling. Rather than leading the line and utilising his great leap as a scoring threat, his heat map in the first half told a story of playmaking in deeper positions.

Since the Asian Cup triumph in 2015, this team has been marred by an inability to get a result when it matters. Every team goes through a cycle, and Australia is currently in the midst of an identity crisis.

Postecoglou’s intention is clear. He wants to implement a more expensive approach in the Socceroos – playing out from the back, crisp short passing accompanied by constant player movement. The concept of normative right or wrong doesn’t exist in football. If the team is winning, then the approach is right. Unfortunately for Postecoglou, the Socceroos is struggling. 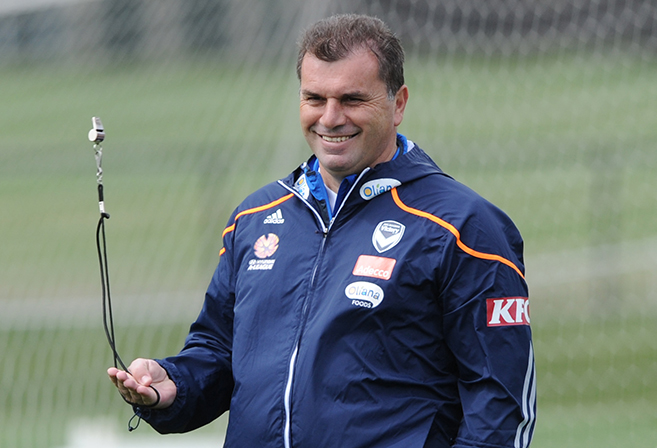 By abandoning the gritty and pragmatic version of the Socceroos, the team has been left with a system that many of the players are still uncomfortable with. Rather than allowing the backline to send a simple long ball to the number nine up the field, the defensive unit were instructed to play the ball out and in this process become their own worst enemy.

Matt Ryan and some of the central defenders are not natural passers. They lack the temperament, technique, and mutual understanding needed to advance the ball in such a high risk high reward method. And in fairness to the defensive unit, all three qualities are sorely absent in all areas of the pitch.

The predictability of our playing style, resulting from Postecoglou’s stubbornness over style, is exposing the team. The current style has benefitted neither the offence nor the defence.

In all of the recent good performances, the Socceroos abandoned their expensive mentality and reverted back to a more pragmatic approach. The match against Chile in the 2017 Intercontinental Cup was a prime example. The players were physically combative, played by their instinct, and pragmatic in offence.

Although the result wasn’t ideal, the performance was brave and honourable. In a game where most expected thrashing, the Socceroos gave the South American champion a real test.

The point is that all successful teams in the world have an identity. They are successful because they are the best at executing a particular set of skills and tactics. At the moment, the system doesn’t cater to the strength of the players at Postecoglou’s disposal. The team is sure of who they are and who they want to be.

Postecoglou’s vision for the team is noble. However, his vision is incompatible with too many players. Whether it be personality or technical ability reason, the under-performance of many players indicate that the current system is stifling rather than realising the true potential of these players.

There is no shame to be that bash-and-grab team in Asia and in the World Cup. Not all teams in the world have to play like Brazil or Barcelona. Just as nobody is going to discounts Leicester City’s premiership win because of their direct, counter-attack football, no one in Australia will show any less respect to a combative, pragmatic, never-say-die Socceroos.