Richmond's rewarding leap of faith may change the AFL

In an era where clubs are obsessed with pre-game entertainment and selling experiences, Geelong opposing Richmond was a poignant reminder that nothing will ever shade the experience of two great sides in a finals series.

Earlier this year, new recruit Dion Prestia described Richmond as a “different world”, if you did not believe this at the time, after Friday night, it was undeniable.

The Melbourne Cricket Ground was packed with 95,000 voracious supporters, the passion was evident, the noise and excitement was unmistakable.

For the plentiful Richmond supporters in attendance, long-suffering and starved of success, the final siren rang out as vindication for their unwavering faith. It had been a long road to the first finals win since 2001. There had been drafting errors, the mediocrity of the Terry Wallace era before an underwhelming season in 2016.

Yet they stuck through when others may have become disillusioned and voted with their feet. The membership record of 75,773 is a testament to that.

Come the end of season 2016, Richmond itself was at a crossroads. Having failed to make finals for the first time in four years, many called for action. The pressure was immense as it was constant.

The game-plan was tedious and built around precision and perfection with little leeway for error, making even cavalier players in Dustin Martin seem robotic.

Brett Ratten suffered the indignation of losing to a young Gold Coast side at the time, missed finals and paid with his job in 2012. Rodney Eade was recently seen out of the Gold Coast, having failed to meet the expectations of finals, despite the problems admittedly being greater than anyone first predicted.

Mark Harvey was similar, having guided Fremantle to finals in 2010, he was dismissed despite an insurmountable injury toll in 2011.

Yet, rather than bowing to the pressure, Richmond stayed the course and reappointed Damien Hardwick until 2018.
It was a bold decision that went against the grain in AFL terms.

The call was made more important when Hardwick announced an intention to return to finals in 2017, which was laughed at by many at the time.

Yet, they moved to a decidedly uglier style of football, where they ranked last in disposal efficiency yet third for inside 50s and first for tackles inside 50.

The remodelled game plan moved from precision towards territory and ferocious intensity and is well-suited for the cauldron of finals football.

With the high stakes apparent, Richmond and went back to the drawing board and placed their faith in the resources at Punt Road. Blake Caracella and Justin Leppitsch moved in alongside stalwarts Andrew McQualter and Ben Rutten to bring new inspiration and innovation to a Richmond coaching group.

The faith extended to the playing group, Jacob Townsend, once a fringe player in the midfield, now shapes as a key cog in Richmond’s forward line.

A hard match up as a strong marking forward, Townsend has kicked 13 goals in his last three games to point to a greater future. Ditto the likes of Nick Vlaustin and Kamdyn McIntosh who are experiencing career years.

There is an overwhelming theme of faith which, with Richmond on the precipices of a grand final, looks set to be rewarded in the grandest of ways should they overcome either West Coast or Greater Western Sydney.

Should they bring the intensity and dare they showed against Geelong mixed with the unbridled passion of their supporters, that is a more than feasible possibility.

If the Tigers are rewarded with the AFL’s ultimate success, maybe more clubs will be prepared to reward their coaches with faith instead of parting ways and proceeding with an endless line of rebuilds and five-year plans.

Something already witnessed with the reappointment of Nathan Buckley and Brad Scott at Collingwood and North Melbourne respectively.

And, should Richmond be in front come the final siren in the preliminary final, it will symbolically be the restoration of a fallen empire and awakening of a sleeping giant.

Yet, more importantly, it will be repayment for Richmond’s blind and steadfast faith.

Both the Richmond Tigers and Geelong Cats have named unchanged teams for tomorrow night’s grand final.

The AFL grand final is always a massive day for punters, and this year’s unique decider between the Richmond Tigers and Geelong Cats promises to be as big as ever.

It’s an AFL grand final like never before, and not just because it will be at night. The Gabba will host the season-defining clash between the Richmond Tigers and Geelong Cats, but there will still be a schedule of pre-game entertainment.

In 2010 Richmond CEO Brendon Gale boldly predicted Richmond would have three premierships by the year 2020. 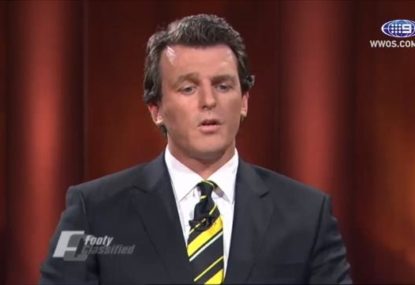