The rugby gender divide is too real

After much contemplation, I am now ready to publicly attest that the gender divide is alive and well, and the Black Ferns winning the Women’s Rugby World Cup has made it blatantly obvious, once again.

This last WRWC was instrumental in cementing women’s rugby as a global sport. For the first time, the competition “won a primetime slot on Britain’s most popular commercial channel”.

That’s definitely a step in the right direction. According to Nadia Khomami, “About 1.1 million viewers tuned in for England’s 20-3 semi-final win over France” while, “Across the channel, France 2 drew a record audience for a women’s rugby match, with 3.4 million watching that game“.

The USA v NZ semi-final was televised in the US by NBC Sports. An article in the Telegraph asserted “a peak of 2.6 million viewers tuned into ITV’s live coverage” of the final.

What makes this number particularly satisfying is that it was “almost half of the audience for the men’s final in the UK at RWC 2015”. So in other words, the men’s “month-long competition with 20 years of high-profile tradition, and a huge promotional budget, for which ITV reportedly paid £60m for the rights to show, attracted an audience for its showpiece final that wasn’t much more than twice the size reached by the women’s final (for which ITV probably paid loose change, if anything at all)”.

Now, that’s a testament to the increase in interest.

According to WR, the Women’s Rugby World Cup had “a record total attendance of 45,412”. The “pool stages in Dublin sold out with 17,516 attending matches” and “the final attracted 17,115 spectators”.

Unfortunately, unbelievably, there are no statistics from previous WRWCs in order to make a comparison.

Perhaps most telling were the online stats: “73 per cent of social media engagement was under 24, while a 53/47 per cent audience split between female and male fans, highlighted the appeal of the action to both females and males”.

Regardless of the success that the WRWC was, there is still fear in the air with regard to the future of women’s 15s. Look at the situation in England. The Red Roses have been trailblazers for women’s rugby. They “became the first team in Six Nations history not to concede a try and won the team of the year award at the BBC Sports Personality of the Year 2014 – a first for a women’s team“. Their popularity is evidence of the “shifting culture of rugby, which is transforming from a macho sport to one played by tens of thousands of women and girls across the country“. 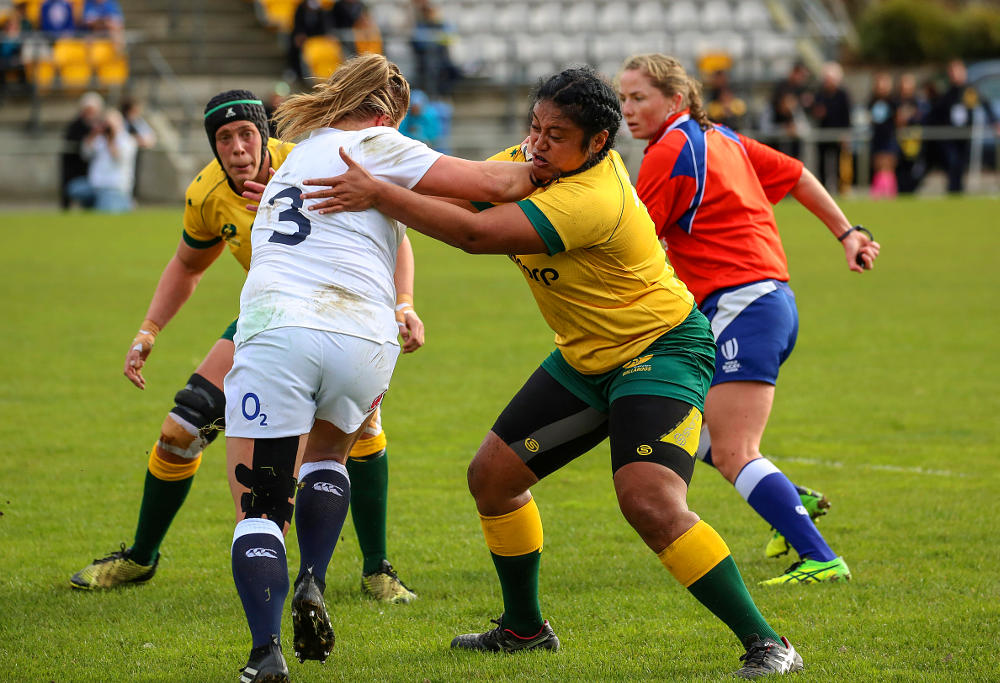 England went into the WRWC as the only professional side but the RFU’s decision to not to renew the players’ contracts after the tournament caused a ruckus. Tonia Antoniazzi, Labour MP and former Wales rugby international, claimed that the RFU could easily manage to keep paying the Red Roses: “…the full-time contracts for women only paid around £18,000 a year” therefore to “pay their 28-woman World Cup squad would, therefore, cost around £500,000 or 0.252% of their projected income for last year”.

Remember, this is a union who earned “around £400m for hosting the 2015 World Cup” – they aren’t exactly strapped for cash!

The contract situation wasn’t a surprise for the Red Roses – they were aware that the contracts were only for the WRWC. At least the RFU confirmed in July that there “would be 17 sevens contracts for the coming season”.

So this is what I take from that: as there isn’t much need for a squad of 15s players now the World Cup has finished, let’s just drop their contracts and give the sevens new contracts, until we need the 15s again for the next WRWC. However, perhaps a different way of dealing with this situation would be to increase the number of tests being played between WRWCs to keep the momentum going.

So how different is the English situation to that of NZ?

On the NZ rugby website, the Black Ferns are described as “the dominant team in women’s rugby worldwide, with Women’s Rugby World Cup titles in 1998, 2002, 2006 and in 2010 and the highest winning percentage of any international rugby team”.

Although “women have been playing rugby in New Zealand since the 19th century”, it wasn’t until the 80s when the popularity of the sport picked up.

The first game the New Zealand women’s selection played was in 1989, and ten years later, the Women’s Provincial Championship was started.

Women “make up 15% of rugby players” in the “only area of significant growth” in the game. According to former Black Fern Melodie Robinson, if the NZR is “truly committed to ‘respect’ for women, the best place to start is with their own players…”.

Robinson calls for more regular tests and additional competitions in order to raise the profile and to start earning the revenue needed to pay the players: “The Black Ferns play an average of just 10 tests between World Cups, which shows an absolute disregard for a team that has won more World Cups than the All Blacks”.

She suggests playing tests as double-headers to All Blacks games. How great would that be? Or could that be a potential source of embarrassment? After all, according to WR’s rankings, the Black Ferns have 95.66 points while the ABs have 95.21 (and I know women’s teams were started on 80 ranking points in 1987 to combat the fewer matches played). And as we know, the Black Ferns have won more RWCs – 5 to 3. Imagine if the BF’s won their game and the ABs lost! It would no doubt be the end of the initiative.

The Black Ferns sevens get money from Sport NZ because sevens is an Olympic sport. This is good for the women and good for NZR. This means the women actually get salaries comparable (not equal) to the men. The only difference being, they actually win more of their games.

The same job, but for longer as, “analysis has shown that on average the ball was in play 10 per cent longer [in the women’s games] than in the men’s matches”.

As Gregor Paul pointed out, “The women had to fly home economy class after playing five games in 17 days; the men reclined in their business seats, having played seven games in 43 days with endless gripes aired about the one occasion during the pool stages when they had a four-day gap between tests”. In addition, the men’s salaries “range from $195,000 to $850,000 and have a bonus structure in place which meant victory brought them each an additional $100,000”.

I haven’t heard one of the Black Ferns demanding the same pay as the men. And most supporters of their plight aren’t demanding that either. Most of us realize that “a fully contracted 15s programme is not yet sustainable”. But surely there should be some benefit for those wahine toa representing our country at a WRWC: “The Black Ferns and All Blacks go to their respective tournaments with the same goal, under the same pressures with the same expectations. Why shouldn’t the pay, therefore, be the same?”

Why shouldn’t they get the same match fees, bonuses and a business class flight like the men in black do for playing in a World Cup? In the Black Ferns squad, of 28 players, “just six are on professional sevens contracts and the rest work full-time in sectors as diverse as policing, the fire services, education and sports development”.

While I believe that NZR are trying to develop the women’s game, even now “only 11 of New Zealand’s 26 provincial unions field women’s teams”. Moreover, the $9.5 million increase NZR gave to the top 14 provinces didn’t stipulate “a specific amount has to be invested in women’s rugby”. Wouldn’t that have shown intent to develop the women’s game? Wouldn’t have that sent a message?

Maybe all women involved in rugby in NZ should go on strike until the Black Ferns get something (notice I didn’t say get what they deserve… I think that’s a long way off). No ladies making the cups of tea in the clubhouses. No mothers driving the kids to their ripper rugby games. Maybe then NZR will realize the contribution women make to rugby. (I’m not actually calling for a strike here, I wrote it for impact!)

However, it’s not all doom and gloom.

Watching an episode of Small Blacks TV, it was heart-warming to see Kendra Cocksedge along with Beauden Barrett giving a masterclass on kicking. Both players were given the same amount of time and consideration in the filming of the excerpt. And that, ladies and gentlemen, is what equality looks like.

I believe the Black Ferns need more support from NZR. Their battle for New Zealand’s honour is no different than that of the men. And there should be some reward for that. However, the dialogue that the WRWC win has created is positive and hopefully will result in some changes being made.