Confessions of a grand final coward

It has been a year, minus a week and a day and a half.

Since the night my shaking finger refreshed the mobile phone and I watched the line at the top complete its journey across the screen.

For a moment, with the MEL at the top, I thought the Storm had taken it but then the sight of CRO 14 in bold italics hit home.

The image remained – torturing me – on the FOX NRL LIVE SCORE website for the entire off season.

The 2016 grand final that was decided by Andrew Fifita’s try in the 70th minute. I still haven’t watched it.

And I’m still not ready

Yes, I’ve heard snippets from friends and relatives who didn’t really want to talk about it but had had the courage to watch. I heard Cronulla came out hard and unsurprisingly targeted Cronk.

But the 2016 Storm, like their 1999 predecessor, was patient and relentless. It turned the tide and broke the surface with the 65th-minute Jesse Bromwich try.

I heard there were then two consecutive penalties – Christian Welch was mentioned – that led to the match defining act.

I have only two visions of the game and both seen unintentionally in a highlight package and a post-game analysis months after the tragic event. Against my instinct, I didn’t look away.

The first was the worst: Fifita’s quivering slow motion put-down, and the second was an interview on the ground with Michael Ennis who admitted he thought the Bromwich try had spelt the end for his team.

It’s been nearly eight years since I wrote Why I can’t Bear To Watch The Storm In grand finals.

It documented a history of being unable to watch my team play in a decider. It began as a child in my AFL days with bike rides around Melbourne during Collingwood’s gallant but doomed battles for glory in the late seventies and early eighties, and continued after my conversion to rugby league and the Melbourne Storm.

And nothing has changed. In fact, the condition has worsened. Despite being a paid up member I can rarely watch a home and away game live, or on television.

A recent Eurosport ad proclaimed:-
‘I am a devoted fan. I am a true believer. You can only understand my madness … if you share my passion”.

This passion and madness in sports fans is usually expressed in extravagant extroverted acts on game day and, in its less noble manifestations, can be seen in drunken altercations afterwards.

But mine take another route  – to timidity trepidation and intricately plotted means of escaping the source of my passion.

I retreat within myself, go inside my shell. But unlike the snail and tortoise I’m always on the move: by car, on the bike or striding along the neighbourhood footpaths without a destination.

To kill those two hours.

Is my version of fandom a more serious form of madness, an act of cowardice or the greatest passion of all? Who knows?

I have been privileged to revel in the glorious longevity of this club’s success –  surely one of the greatest of the modern era – and the heated controversy surrounding its success has pained me sometimes but also made the achievements all the sweeter. 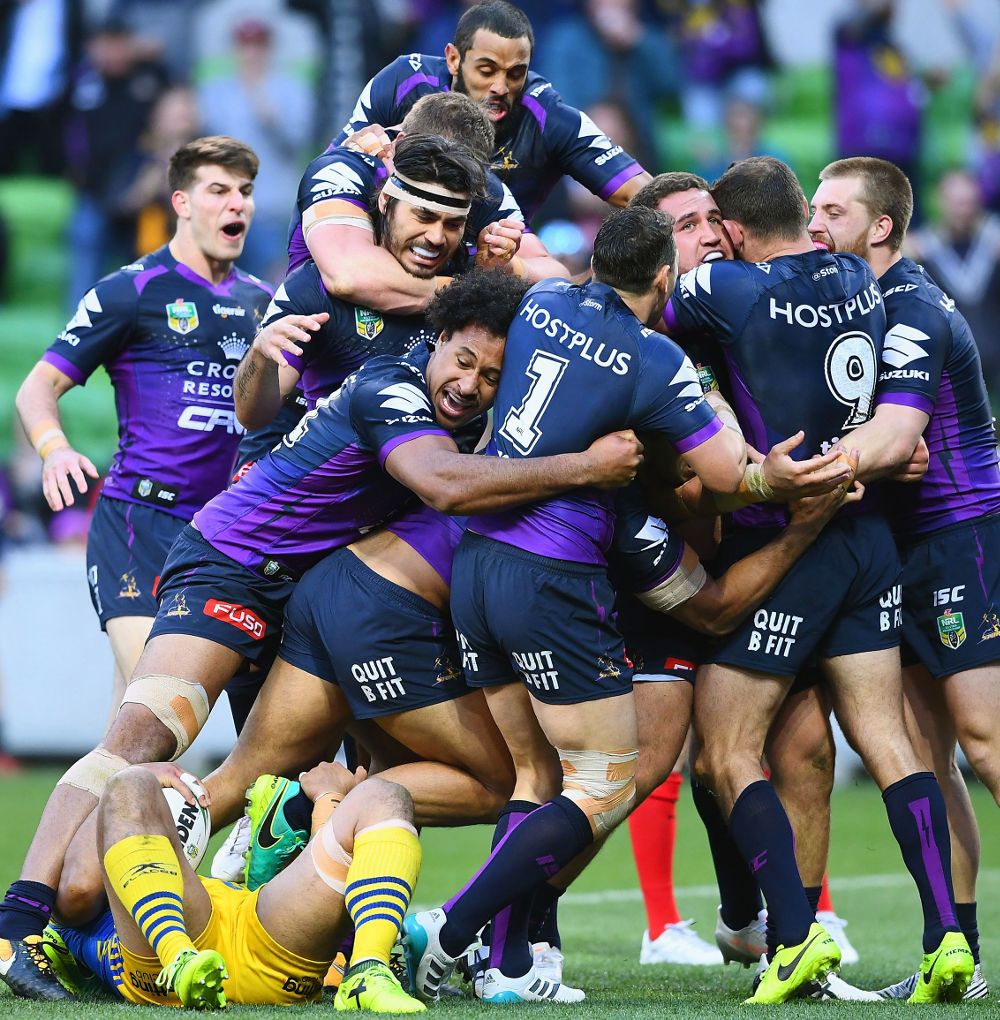 It won its first premiership in only its second year, was a target of resentment for the demise of traditional clubs, its initial News Limited funding and lack of a league culture. And then of course came the salary cap transgressions and criticism over its tackling technique.

I’ve given up calculating the statistics of grand finals played and minor premierships won (and this year’s team is a level – at least-  above last year’s minor premier). As with its skipper, greatness is assured.

Yet despite this level of sustained success and the attacking prowess of his 2017 model I worry about Bellamy’s obsession with defence and wince when I read these words from a military historian describing the Japanese in World War Two.

“They were ruthless and bold as ants while their designs went well, but if those plans were disturbed or thrown out they fell into confusion, were slow to adjust themselves, and invariably clung too long to their original schemes”

Matty Johns likes to call it Storm’s “love of structure”. And like all structures it can be broken down. Opposition coaches and players always talk of “moving the ball” “throwing it about” as a way of breaking down Storm’s solid fortress.

I always fear that Melbourne could one day, in the game that really counts, be outdone by a rag-tag collection of carefree ball throwers, weaving runners and giggling goose-steppers.

But the threat doesn’t lie just there. There are the admirers and replicators of his style for Bellamy to worry about also.

Remember it was Shane Flanagan who on the eve of last year’s grand final  admitted: “Two years ago, when we talked about where we wanted to be as a club, Melbourne Storm were one of the clubs we looked at. I know the way Craig operates. They have been the most consistent team for ten years, for mine. We admire them as a club and a benchmark.”

Tonight the Storm play Brisbane in the preliminary final and it’s because of my pathological fear that they may not make it through I have written this article now and not next week.

At 9.55pm tonight in a deathly quiet street surrounded by hard rubbish collections I will once again refresh the screen on my mobile phone to discover if the Melbourne Storm has added another chapter to its glorious legacy.

If they do I won’t be watching them in the grand final but I will find some comfort knowing that this time around if a huge opposition forward attempts to plant the ball down for a match winning try he will find Billy Slater waiting for him and not the tryline.

And I’m still not ready.