The vast majority of focus heading into Saturday’s grand final has centred on Richmond. Like the Bulldogs this time last year, the Tigers are the sentimental favourite.

A premiership drought that extends to 1980 and the reemergence of one of the code’s most powerful and strident forces – the yellow and black army – has captured headlines.

The scenes at the MCG for last Saturday’s preliminary final against Greater Western Sydney were unparalleled in the sport’s history, with around 85,000 Tigers fans in rapturous delirium.

The ‘G on Saturday will once again be bedecked largely in yellow and black.

Seemingly lost in the hype surrounding the inexorable march of Richmond this season is the journey Adelaide have undertaken and endured in the past two years.

The country awoke on July 3, 2015, to the incomprehensible news that Crows coach Phil Walsh had been killed by his own son.

He was universally beloved in football circles and his passing gutted the community, with on-field, post-game tributes the following weekend bringing the most hardened hearts to tears. 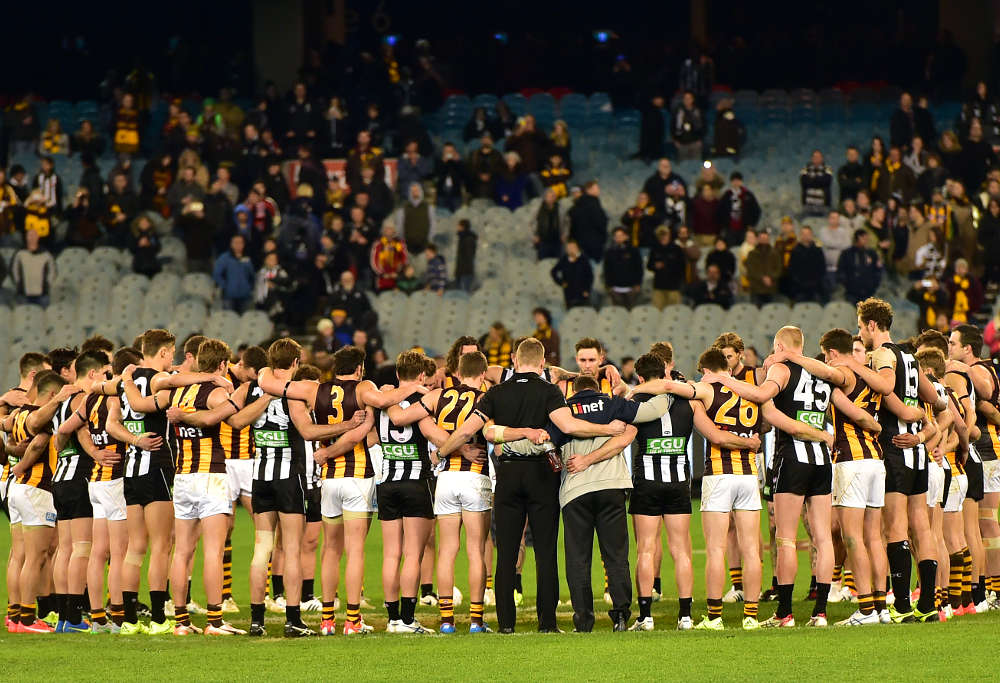 Walsh was only 12 games into his first year at the helm when he died. He may have been nascent in his position but he left an indelible imprint on the club and its players.

The club’s board was charged with the onerous task of finding the best man to lead the Crows out of its darkest period and they settled on Don Pyke.

It turned out to be a masterstroke.

Pyke arrived in Adelaide on the back of a richly decorated playing career in the AFL and WAFL – two premierships and a best and fairest at both West Coast Eagles and Claremont.

Immediately following his AFL retirement in 1996 – at age 27, due to a chronic shoulder injury – he was the Eagles’ team runner for two years, before coaching Claremont for two seasons.

Starting in 2001 he served a four-year term on West Coast board, before heading to South Australia in late 2004 to be an assistant to Crows coach Neil Craig.

It was an interesting partnership, given Pyke had interviewed Craig for the West Coast coaching job after the sacking of Ken Judge in 2001.

After two seasons, Pyke returned to Perth to concentrate on business, utilising his tertiary qualifications in co-founding a seismic data firm that aided oil and gas exploration.

He was born into an academic family. His father Frank, a star footballer himself with WAFL club Perth in the 1960s, posted two top-three finishes in the Sandover Medal, and was a lecturer at Illinois State University when Don arrived in 1968.

The family returned to Perth in 1972, with Frank continuing to build a career as one of the world’s most respected sports scientists. In the mid-1970s he was responsible for the rehabilitation of Dennis Lillee following career-threatening stress fractures in his back.

Some of the techniques that were pioneered during that period were adopted globally for the treatment of such conditions.

In 1977, Don moved with the family to the ACT, where his father took up a posting as head of the centre for sports studies at the University of Canberra, before becoming the inaugural executive director of the Victorian Institute of Sport.

Don was a talented junior sportsman, not only an outstanding footballer but also a member of the Western Australia under-19 cricket team – his brother James played Sheffield Shield cricket for South Australia.

But it was football that became the staple.

A no-nonsense, hard-nosed player, Pyke started as a free-running midfielder before Mick Malthouse turned him into one of the most respected defensive run-with players in the competition.

By the time he threw his hat in the ring for the Adelaide job, Pyke boasted a well-rounded resume – decorated player, club director, successful businessman, and a coaching apprenticeship behind him.

It is a set of credentials that few coaches could boast and it was the type of broad background the Crows needed in the given circumstances.

Pyke has used his analytical brain and life lessons to transform the Crows into a powerhouse.

In his inaugural year at the helm, the club’s 16-6 record during an exceptionally tight home-and-away season saw the club finish fifth. An elimination final win over North Melbourne was followed by a season-ending semi-final loss to Sydney.

This season, the Crows took out the minor premiership, finishing clear of Geelong on percentage with 15 wins and a draw. The club now sits just four quarters of football away from a possible first premiership since its back-to-back triumph in 1997-98.

Through 48 games in charge, Pyke boasts a 72 per cent winning record. He has developed a team that has few weaknesses, with winners across all lines – as evidenced by Adelaide providing eight of the 40-man preliminary All Australian squad.

The Crows have the most potent forward line in the competition, averaging 110 points per game through the regular season, two goals ahead of the next best, Port Adelaide.

They boast x-factor players like Eddie Betts and Charlie Cameron up forward, and a hard-running midfield – Brad and Matt Crouch, Richard Douglas and Rory Sloane – fed readily by one of the league’s most improved ruckmen, Sam Jacobs.

Their defence is the fourth most miserly in the league.

Pyke has great faith in his men, as they do in him. He is happy to leave things run for as long as he can rather than make kneejerk changes.

On Saturday, he has the chance to take his team to the Promised Land. A little over two years ago, it seemed a task beyond most.