Richmond recruiting a recipe for success

Much has been made of Richmond’s resurgence this year being driven by a new mentality and bond between the playing group. This has obviously been a major factor, but there’s another, more tangible reason, that has been largely overlooked.

Hawthorn have been the premier example in recent times of recruiting to fit a specific gameplan. It’s been well documented that list manager Graham Wright and coach Alastair Clarkson built their Hawthorn juggernaut largely through targeting players with precise foot skills to execute a gameplan based around fast, precision ball movement that cut through opposition defensive structures and place a premium on keeping possession of the ball.

Over the past two years, Richmond have taken a leaf from Hawthorn’s book and targeted players suited to their game style, rather than the alternative route of selecting the best possible players and then crafting a style based on their abilities.

This has allowed the Tigers to compensate for their perceived weakness in their lack of a true key forward – rather than selling the farm to recruit one from another club, the Tigers instead decided to maximise their strengths, and have made their list management decisions based largely on two factors: pressure and speed.

This has been an astute decision, and arguably one of the biggest factors in the Tigers’ successful season this year. For a long time, Richmond’s recruiting focus has been on bringing in good players (and some questionable ones…) – this is not a bad thing, but it has manifested in a team seemingly unable to adhere to any particular gameplan, and unsure as to which strength to maximise.

Not being part of the inner sanctum at Tigerland, it’a impossible to pinpoint the exact time that Richmond decided to take this approach, however it’s likely that it came about due to a shake-up in Richmond’s recruiting department in 2015.

Former head recruiter Francis Jackson moved into a part-time role and Matt Clarke took over as Richmond’s head of recruiting. Clarke’s most obvious change in focus was to recruit players based on the game style the team wanted to play, not solely to fill positional gaps.

Speaking on that year’s recruitment of Chris Yarran, Jacob Townsend and Andrew Moore, Clarke noted that Richmond had actively changed its approach to the 2015 national draft, deciding to “be a bit more aggressive in the trade period”, and identifying players who would complement the gameplan. While the Yarran trade was unfortunately a failure, the key ingredients of the Tigers’ current plan were taking shape (Yarran, speed, Townsend and Moore, pressure). 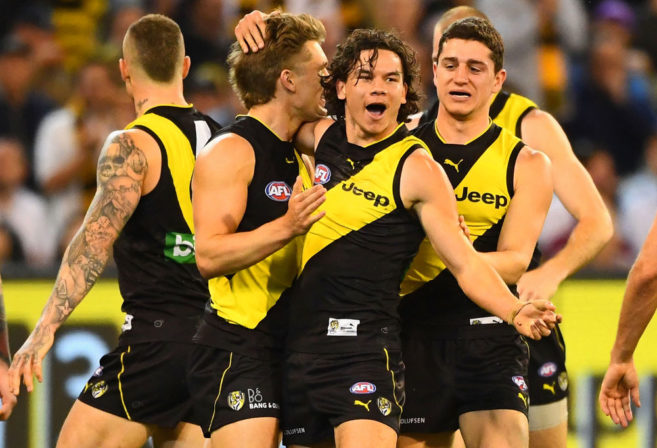 This approach then filtered down to Richmond’s strategy at the most recent national drafts. Two years ago, Richmond selected Daniel Rioli at its first selection, and last year did the same with Western Australia speedster Shai Bolton. The Tigers also took speedy small Tyson Stengle in last year’s rookie draft, and South Australian under-18 captain Jack Graham in the third round of the national draft.

Rioli’s selection raised some eyebrows at the time, with many draft pundits of the view that selecting him at pick 15 was a reach. The selection of Bolton and Stengle last year was questioned for what seemed to be a depth build – having had no genuine small forward for years, suddenly the Tigers had an abundance of them.

Jack Graham’s selection was also questioned – while taken at the relatively lowly pick 55, the general view of the footy world was that Richmond was stacked for inside midfielders.

However, looking back, its evident that these players were selected with Richmond’s gameplan in mind. Rioli and Bolton are speedy, pressure small forwards, while the fact that Graham is likely to play in a grand final in his first year of AFL speaks volumes to his pressure and toughness around the contest.

The recruitment of Josh Caddy and Dion Prestia was also done with a view to improving the Tigers’ pressure, which has come to fruition in spades this season – while not large accumulators, the pressure that these two players provide and their willingness to win the contested ball has freed up the likes of Trent Cotchin, Dustin Martin and Brandon Ellis to play with more freedom.

Recruiting players for a particular game style has been a hallmark of recent successful teams – the Bulldogs built last year’s victory on the flexibility of their players, also figuring that this was a way to minimise the impact of its lack of a true key forward. Sydney have always identified players based on their personal character, while Geelong have targeted players with good skills and high football IQ, and, of course, there’s Hawthorn.

In following that recipe, and coupled with their off-field stability, Richmond have found a recipe for success.