After the tirades dished out by Sea Eagles coach Trent Barrett and Sharks coach Shane Flanagan in regards to their view that refereeing decisions cost them their respective finals matches, NRL CEO told all of us who have a tendency to blame the referees from time to time that we needed to “grow up.”

Todd had a point.

We can’t just blame the refs. Firstly, everyone makes mistakes and we have to accept that. Secondly, a refereeing error is highly unlikely to be the sole reason that your side lost.

However, there is a counterpoint to that. The referees are there to control each game by applying the rules of the game to the play. What we, the fans, expect is consistency in how they go about that.

However, there are statistics that strongly suggest that certain games are controlled quite differently. What are those certain games? The grand finals.

The stats clearly show that the number of penalties awarded in the most important game of the season are consistently well below average. In every one of the last 11 grand finals, an average of one-third fewer penalties were awarded than both sides combined conceded on average during each season in question.

In not one of the grand finals was the average achieved. The closest was in 2006 when it was only two fewer.

In 2007, 2008, 2011 and 2013 there were over five fewer penalties awarded. However, the worst variation was Matt Cecchin and Ben Cummins in last year’s grand final. Two sides that combined averaged 14.3 penalties a match over the season suddenly conceded just eight

There are two possible reasons for this:

1. The two teams were on their best behaviour because it was the biggest, most important match of the year; or
2. The referees deliberately awarded fewer penalties.

My personal inclination is that the second option is the most likely.

So why would they do that?

Well, there is a theory that what the referees most want to achieve in these games is a match that flows well and isn’t interspersed by too many stoppages, lest the whistleblowers provoke the ire of the fans or the press because they deigned to enforce the rules too much.

So they are far more selective about the penalties they award. They swallow their whistles.

However, if that is the reason for the sharp drop in penalties during grand finals how is that possibly good for the game? Are the referees not effecting the outcome of the game by allowing things they would clearly pull up in normal games to pass without sanction?

Isn’t that effectively just allowing the law of the jungle to rule? Turning a blind eye in the name of optics and spectacle? Is that how grown-ups are meant to act?

But does it really matter if the fans don’t care and – in fact – actually like it?

En route to the Round 13 Sea Eagles versus Raiders match this year, crushed in the back of the ABC Grandstand Toyota Prius, ex-Raiders captain Alan Tongue lauded the performance of referees Cecchin and Sutton in Origin One to me on the basis that they had only blown up six penalties in total and let the game play. He wasn’t the only one that I heard express that sentiment either. 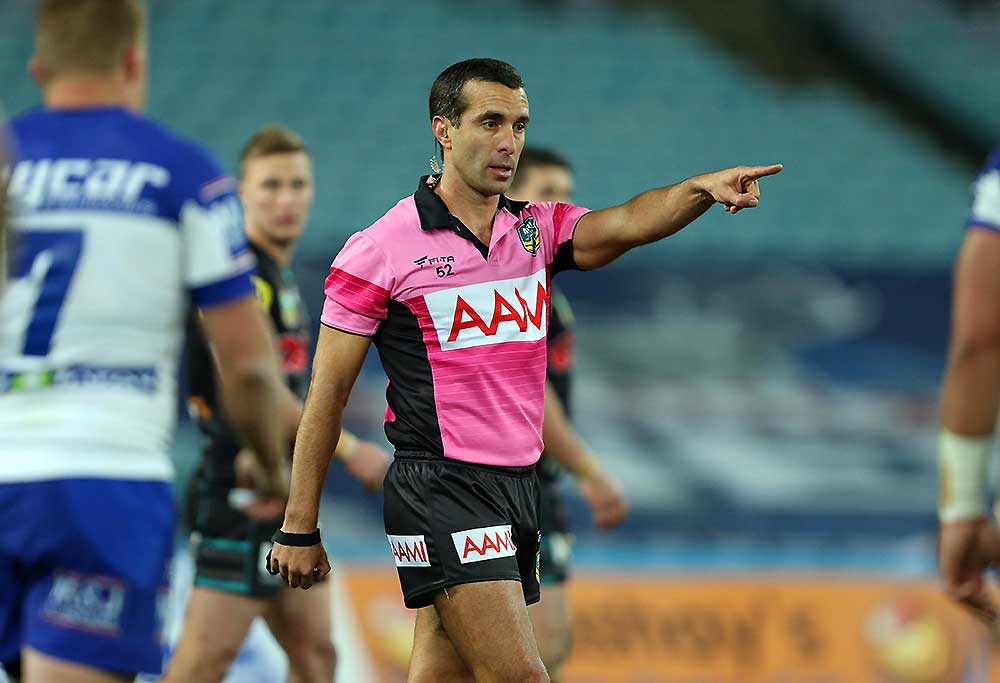 However, I’d seen a few inconsistencies in the match that I thought effected how the match went at crucial points. For example, Matt Gillett not getting a penalty for being hit high – to the extent that his mouth bled – wasn’t fair, especially as seconds later he himself got penalised for tackling James Tedesco – who was possibly an inch off the ground – in the air. For mine that was a huge turning point in the game.

One was let go. One wasn’t. NSW scored shortly after Tedesco got the penalty and they never looked back. What if the Gillett high tackle hadn’t been let go?

Did Cecchin and Sutton miss the high tackle on Gillett or did they let it go?

We’ll probably never know that either.

It may be an unpopular view, but I believe that either a game has rules or it doesn’t. If you enforce the rules properly with sanctions that act as a proper disincentive, then the teams will quickly fall into line. You’ll get a faster flowing game because you have enforced the rules.

This clear statistical evidence that games can be officiated differently opens the referee’s performances up to fair question. The sort of fair questions a grown-up should ask.

A referee’s primary role is to police the game to ensure that the rules are being followed. In grand finals – the biggest games of the season – it seems that role could be being subjugated to ensure game flow.

Earlier this week it was announced that the referees for the grand final would be Matt Cecchin and Gerard Sutton. In my opinion these two are very good referees and deserving of the gig.

However, I want you to consider the following statistics.

This season, up to the end of the home and away matches, games that Matt Cecchin ran averaged 14.6 penalties. Not once did he have a game that had fewer than ten penalties awarded in it. Four times there were 18 penalties in his games. Once he had 22. Gerard Sutton’s games averaged 13.1 penalties. He had three games that had just nine penalties in them. However, he also had a 21, 20 and an 18.

Then the finals happened and things changed. Have a look: 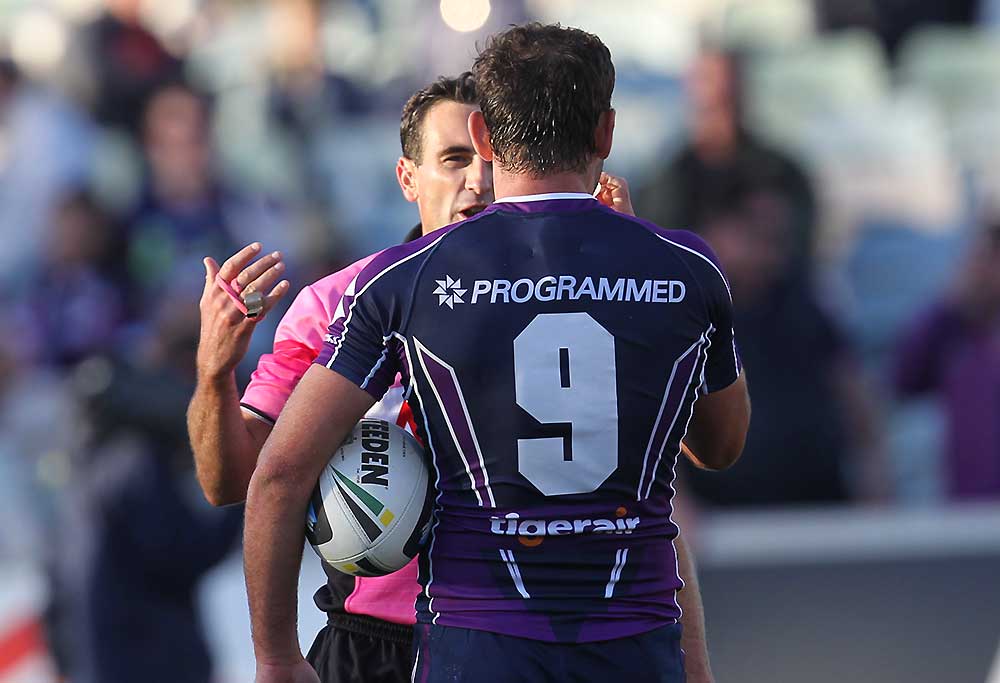 I guess this massive drop could be a coincidence.

However, if it isn’t a coincidence then there is a good case to say it is paramount to an abdication of responsibility from the very people we entrust with the most responsibility. It also means that members of the press, the fans and – yes – the coaches have a total right to question why one penalty was awarded while another was not, and further, to question whether a referee’s performance influenced the result of a game.

The stats say that this Sunday’s game should have the best part of 13 penalties awarded. If the above stats bear out though it will more likely be nine or less.
If that occurs let’s hope that there are no offences that were missed that can be argued to have cost a side the game.

I hope that Matt Cecchin and Gerard Sutton run the game without fear and don’t swallow their whistles. Even if that means they make unpopular decisions.

Because at the core of it, refereeing should have nothing whatsoever to do with popularity.