The Roar
30th September, 2017
8
Join the conversation
Advertisement
Write for The Roar

Every year the Norm Smith medal is awarded to the best-performed player at the AFL Grand Final.

In 2017, the winner was Dustin Martin of the Richmond Tigers, who added it to his collection with a Brownlow and premiership medal in 2017.

Martin had 28 disposals and two goals for the Tigers.

He won the award with 13 out of a possible fifteen votes, with four of five judges giving him three votes as best on ground.

Bachar Houli finished as the runner-up with 10 votes and was the only other player to get votes from all five judges.

Alex Rance, Shane Edwards, Dion Prestia and Jack Graham were the other players to receive votes.

No Adelaide players received any votes from any of the judges.

Rory Sloane kicked two in the first term and was a deft hand in the middle of the ground, but like the rest of the Adelaide side struggled as the match went on.

Matt Crouch had 35 touches for the Crows, including 19 kicks, but didn’t have as much impact as those numbers would suggest.

Toby Nankerivs was beaten in the ruck by Sam Jacobs but had a great impact around the ground with 18 disposals.

Jack Riewoldt was in the bad books early kicking three behinds in the first term but was dynamic throughout and kicked two goals.

Dion Prestia and Kane Lambert were great in the midfield and pushing forward for the Tigers.

Perhaps the biggest surprise packet of the day though was fifth-gamer Jack Graham who booted three goals, the most of any player on ground.

This week, in the continued absence of live sport, we look back at another four Grand Finals, as well as a huge comeback win by the Brisbane Lions from 2013, a finals boilover from 2016, plus one of the closest Western Derbies of the 21st century. 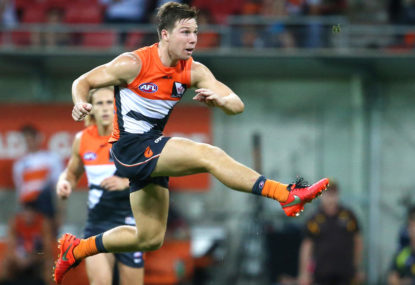