Forget the fairytale, the perfect Storm were always winning the premiership

It was always going to end this way. The Melbourne Storm were never going to finish this season as anything but the most deserving of NRL premiers.

There wasn’t a neutral supporter who didn’t want North Queensland to win last night’s grand final, not one supporter north of the Murray who wanted to see this magnificently ruthless horde of purple-clad men hoist the trophy.

And perhaps that’s a tick unfair to Craig Bellamy’s men. So good is this team, so consistent have they been over the past decade, that they have rarely been portrayed as anything but the big bad villains ready to crush the dreams of whichever hopeful opponents stood in their way.

The past week was no different. The enduring narrative in the lead-up to the decider was all about the North Queensland fairytale. How the men from Townsville had defied just about every obstacle that could possibly have been thrown at them. Injury. Poor late-season form. A last-round loss that should have seen them knocked out of the finals before they had even begun.

True to the story, that tale of adversity continued almost as soon as the decider began. Shaun Fensom, a man who had waited nine years for his first taste of grand final footy, was stretchered off the field after just three minutes.

Then some more ill-luck; an accidental collision with referee Matt Cecchin prevented Te Maire Martin from laying a hand on Josh Addo-Carr as the Melbourne flyer raced away. We can’t say for sure if it was the difference between a try and a play-the-ball 60 metres out, but Martin did look set to catch Addo-Carr before he ran into Cecchin. 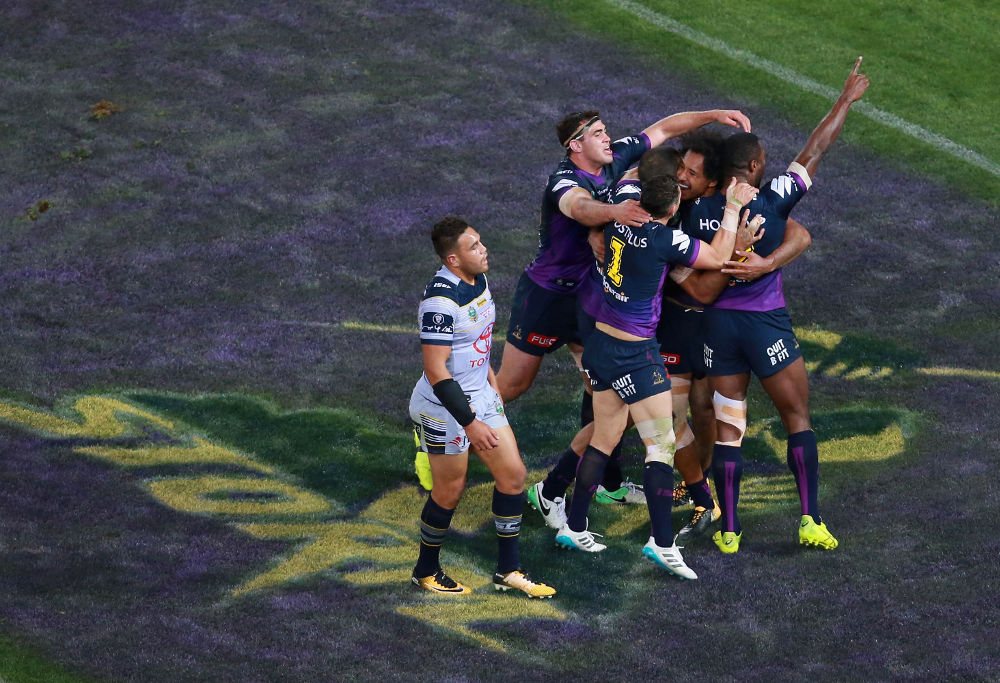 Of course, that misfortune just seemed like the perfect set-up for yet another chapter of the North Queensland fairytale. They’d beaten adversity all year – surely they couldn’t win the premiership without having to do so once again in the final game of the season.

Of course, it wasn’t to be. This Melbourne side is too good – far too good – to let something like sentiment get in the way of a grand final victory. Well, except for last year.

So they followed up Addo-Carr’s try with another to Felise Kaufusi. And then another to Billy Slater. Three more followed in the second half, the final one simply sublime; Smith and Cronk combining to put Slater away one last time, before the fullback offloaded to allow Tohu Harris – yes, the second-rower – to unleash a superb cut-out pass to Addo-Carr.

The 34-6 margin was cruel to the Cowboys – Michael Morgan spoke of being embarrassed in his post-game interview. But it was a fair reflection of how brutally efficient the Storm were.

No Cowboy was able to dominate around the ruck and gain a quick play-the-ball or two. Not even Jason Taumalolo, whose name is pretty much impossible to utter without also mentioning the words ‘human wrecking ball’.

None of the Cowboys’ playmakers were afforded the time and space to measure their last-tackle options. Time and time again, Michael Morgan’s kicks found only the grateful arms of Billy Slater.

The Storm, by contrast, were nigh-on faultless. With the exception of Jesse Bromwich forgetting he’s a front-row forward and opting to dummy and go instead of putting the runner on his inside away, Melbourne’s first half was perfect, and their second wasn’t much worse.

Even when the Cowboys were the first to score in the second half on the back of four penalties, you could tell the Provan-Summons trophy was on its way to Melbourne.

Billy Slater’s kick returns were excellent, as were his contributions in attack. Cooper Cronk, playing his final game in purple, was his typically organised, composed and precise self.

And then there was the skipper. There has been so much talk about the playing futures of Cronk and Slater, but Cameron Smith looks as if he could play for another 30 years, so effortless does he make rugby league look. That he didn’t win the Clive Churchill Medal was incomprehensible.

It’s exactly what we’ve come to expect from Smith and his team: ruthless, brilliant efficiency. Any doubts around whether they’re the best side of the NRL era are surely gone. They may just be the best of all time.

But we’ll leave that debate for another day. For the time being, let’s reflect only on last night, when North Queensland, for all their resilience, were simply outclassed by a more talented (and far less injured) side.

The Cowboys will be back, we can be sure of that. With Johnathan Thurston and Matt Scott back from injury next year, Paul Green’s men will be high on the list of premiership favourites come 2018. They may even be on top, given Cooper Cronk is out of the equation for Melbourne.

This year, though, belongs to the Storm, one of the finest NRL club teams we’ve ever seen. To take from a famous rugby league anthem of days gone by, they’ve simply been the best side all season. Their premiership success is exactly what they deserved.