I didn’t see that coming. Who did? Only a chosen few knew.

The exit of Western Sydney Wanderers FC coach Tony Popovic to take up a new challenge with struggling Turkish side Karabukspor comes just seven days before the Wanderers start their sixth A-League campaign with a home match against Perth Glory.

Social media has gone into a tail spin and quite understandably so.

I was the host of the Wanderers season launch at Spotless Stadium on Saturday. I had a brief conversation with Popovic as well as CEO John Tsatismas and goalkeeping coach Zelko Kalac. It was actually more about the Annual Croatian Tournament which is held at different locations each year around Australia. Popovic and Kalac have attended many of these tournaments.

Who would have thought the photo I took of the Coach and CEO would probably be the last one of them together in Wanderers colours.

There was not even a hint of what would come 24 hours later.

Hundreds of fans were at Spotless Stadium along with club sponsors as both the A-League and W-league teams were presented with their jerseys.

It was a typical season launch. Lots of fun, activities, team photos, entertainment as well as a light training session. 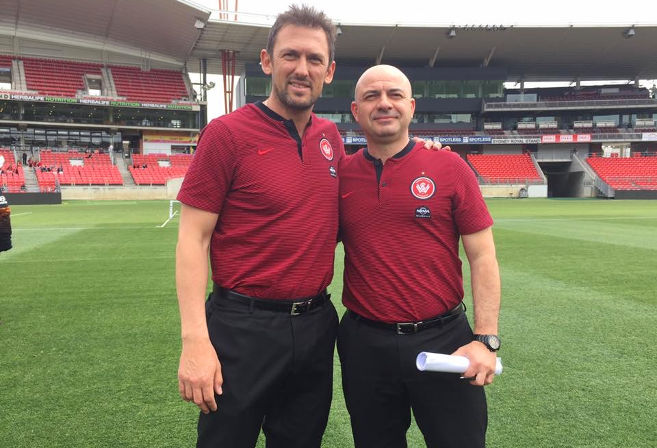 Who will replace Popovic is the big question. One would expect one of his closest allies Ante Milicic – the Socceroos Assistant Coach – will come into the mix. Milicic knows the WSW landscape well have previously worked as ‘Poppa’s’ assistant.

I actually wanted to write a column this week about the season ahead and more specifically the reign of Popovic. Champions of Asia in 2014 and three Grand Finals is a pretty impressive CV. The Wanderers have only missed the finals campaign once.

Yes losing three Grand Finals has been difficult to take for the loyal fans but the entry of the Wanderers into the elite level of Australian football has been a blessing.

The Sydney derbies have been eye-catching generating great media interest as well as delivering huge crowds. There could even be a fourth derby this season if both clubs progress to the final of the FFA Cup.

Popovic and major owner Paul Lederer have worked closely together to ensure off-field success is also matched by what has come out in the middle. I didn’t see Lederer at the season launch.

One would think Lederer and his CEO John Tsatsimas were the first to know about the Turkish offer. The ex-Socceroo has certainly had overseas interest before especially from ASIA.

Karabukspor is in 16th position in an 18-team Turkish League with just one win in seven games securing seven points. The city of Karabuk is located in the north of Turkey very close to the Black Sea and to the east of Istanbul which is just over 400 kilometres away.

One should put this move into perspective. How many Australians have coached a team in a top division in Europe? The challenge and the financial return were too good to refuse.

In the short term the exit is painful for the fans and I can only wonder what the players think but in this era of professional football players and coaches come and go.

Yes the timing is poor for obvious reasons but Popovic has always ensured good football people work around him. There’s a strong support base in the WSW dressing room. It’s always been Poppa’s way or the highway.

The players have to lift, particularly the new signings who have to impress the new coach whoever that will be.

Is there reason for concern for the loyal fans?

In the short-term, yes, but over the 2017/18 campaign one expects this new-look squad to excel.

Who do you sing for?

Andy Paschalidis
Expert
Having worked in the game since 1983, Andy Paschalidis is a true football tragic. He's covered some of the game's biggest events, including multiple World Cups and European Championships.
close