Like Thelma and Louise speeding their 1966 Ford Thunderbird toward the Grand Canyon so Chris Scott and Brian Cook with their list management strategy are speeding Geelong toward a list demographic cliff.

Cook and Scott have chosen to pursue a policy of topping up the list by trading in mature age players rather than fall down the ladder for a few years and rebuild the proper way.

It’s certainly not hard now to see it’s been a huge mistake that won’t pay off for the Geelong footy club but rather see them destroyed as a relevant on-field unit within three years.

Even in the present Geelong find themselves well and truly incapable of seriously challenging for a flag.

The last two Premiers have shown the blueprint for a flag is to build a list over time predominantly through the draft and recruit properly to build depth in the midfield and create a small/midsize forward line with speed, great tackling and pressure, and ground ball winning ability.

Geelong coach Chris Scott’s refusal to understand this following the Bulldogs victory last year is quite honestly astounding. The signs were there early on when in the 2016 draft Geelong chose the one paced Parfitt over the dynamic fast and skillful Shai Bolton.

Parfitt has been good for Geelong this year but was he really the style of player we needed? A one-paced albeit skillful player as opposed to the dynamic Bolton?

Why did Jamaine Jones not get promoted from the rookie list near the end of the season and be given a run up forward after showing some very promising form in the VFL with his speed, forward pressure, and dynamic goal-scoring ability?

Instead the one-paced James Parsons and Daniel Menzel were given continued opportunities in the small/midsize forward roles – Parsons it has been revealed was injured toward the end of the year with the coach saying there was nobody else they could replace him with. Menzel is now all but out the door.

Of the mature age recruits Geelong has traded in over the last six years how many of them would’ve been picked for either the Richmond or Adelaide teams on Saturday? I wager only Dangerfield and Tuohy would’ve made their way in to either side.

Given Geelong’s poor finals results and their individual performances in finals it’s quite clear that Lachie Henderson, Rhys Stanley, Sam Menegola, Scott Selwood (more due to his lack of pace than effort), and Zac Smith won’t be playing in Geelong’s next Premiership. So why do we hold on to them?

Aaron Black will no doubt be delisted soon and can join Mitch Clark and Hamish McIntosh as failed mature age recruits who hardly played a game over the last six years. Rhys Stanley should join them too, but wont due to our poor ruck stocks.

Questions need to be asked of our development – who under 25 at the club seems like they’ll be a genuine star in the future? Cockatoo possibly, best case scenario perhaps Zach Guthrie and Parfitt? Has Geelong developed a genuine star over the last 6 years? No. What is going on with our recruitment and development programs? 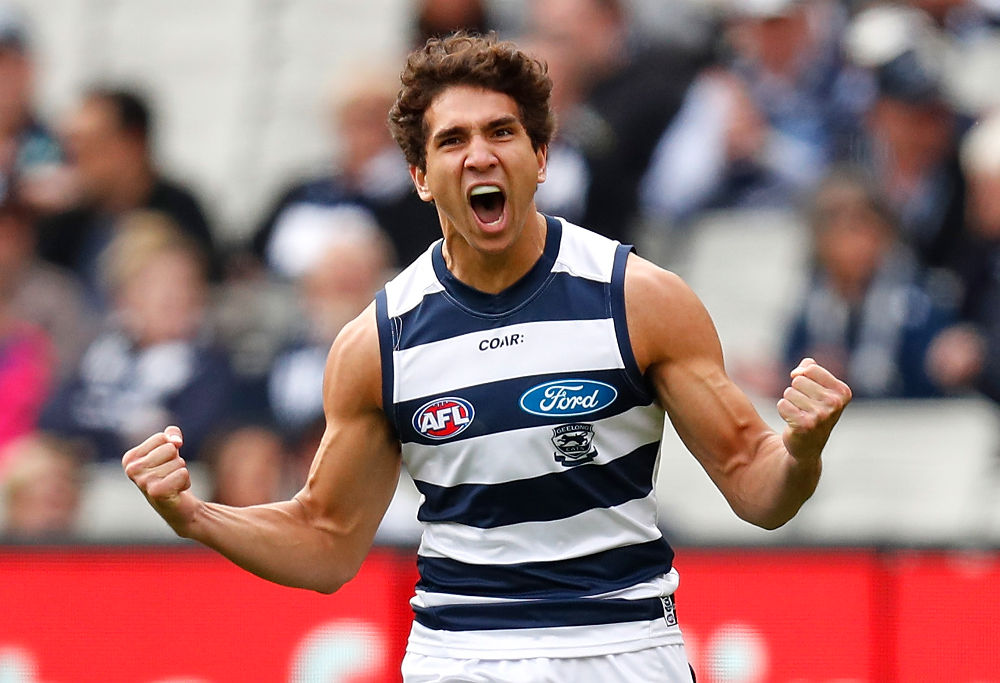 Simple questions now also need to be asked of our list management strategy too – When will the club admit defeat on it’s ‘trade in and recruit for the now’ policy that clearly hasn’t delivered? Why would Geelong be recruiting Gary Ablett Jnr when pace is a clear deficiency in our midfield and wider team and at most he can give us 24 months of footy?

Why isn’t Geelong targeting fast dynamic forwards in the trade period? We know they’re looking at Jake Stringer but he’s only quick over the first five and laid a paltry eight tackles inside forward 50 for the whole 2017 season. Hardly the Rioli, Paul Puopolo, Jason Castagna, or Dan Butler types we’re crying out for up there.

Chris Scott and Cook want to bank wins at the soon to be named GMHBA stadium. Given the dimensions of the ground Scott knows that a tough contested stoppage based game style will win down there but it’s at the expense of being able to trouble the good teams on the MCG and in finals when the speed of the game increases and there’s a lot more space for teams to win it, get it to the outside, and with pace do real damage.

Everything’s become a bit too comfortable down at Geelong. However it’s clear now that drastic change is needed both to the game-plan and personnel if the Cats are seriously going to contend for a flag anytime soon.

It will take courage to change the game-style and risk losing more at Kardinia Park in order to win at the ‘G, and in finals. It will take hard calls on players, it will need Chris Scott and Brian Cook to take a hard look at themselves. 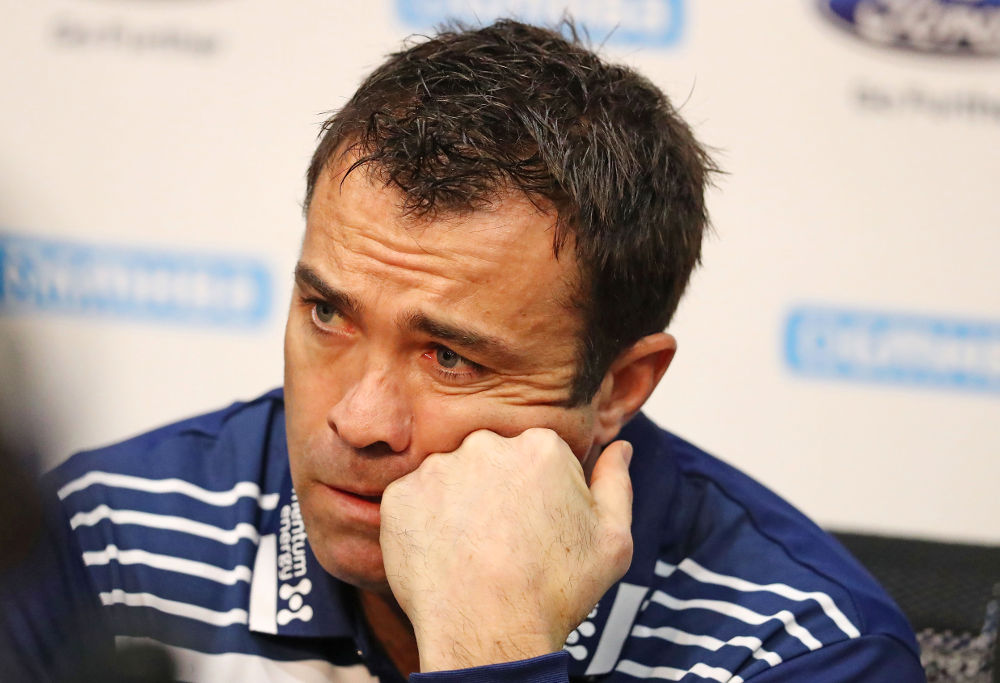 However judging by the comments of the President Colin Carter: “I think getting to the last four is a terrific effort, we’ve rebuilt the team in a way which you’re not supposed to be able to do and I’m sure we’ll be up around the mark next year again too. If somebody had said to us at the start of the year we’d make a prelim we would have shocked a lot of people and we would have been pretty happy,” it seems almost a certainty that nothing will change down at the GFC as it hasn’t for 6 long years.

The comments by Carter are all the more curious considering the club has told members it’s strategy is based on challenging for a premiership in the now.

Why would a club that thinks it’s seriously challenging for a flag be ‘pretty happy’ just making a Prelim only to be smashed by the losing Grand Final team two years in a row?

There are growing rumblings down the highway about Chris Scott’s communication problems and inability to get his team up for finals, at the failed recruitment strategy and the continued seeming satisfaction of Geelong’s results from the current President and CEO despite the horrific finals record of three wins from 11 finals since 2011.

Even incidents like Chris Scott and his assistants having to be called back from halfway down the race (following Geelong’s Preliminary final belting) to send Mackie and Lonergan off the ground in their last game are cause for concern and speak to the detached culture developing at Geelong.

The increasing dissatisfaction down Geelong way is being openly discussed by more than a few ex-players and powerbrokers and fills me with suspicions that a challenge to Cook and Carters positions within the GFC in the next 18 months is in no way beyond the realms of possibility and would also mean Scott goes.

In the meantime however don’t expect the Geelong Footy Club to be doing much different. In 2018 it’ll be the same old sad story.

The last two Premiership sides have had only four players 28 or over in their starting lineup. The game is getting quicker and requires more athleticism than ever – it doesn’t bode well for teams full of older players.

With their impending recruitment of Ablett Jnr and rumours swirling of Mitch Duncan being involved in a possibly larger deal, as well as Steven Motlop and Darcy Lang leaving, the big concern for some Cats fans is that Thelma and Louise aren’t just heading toward the cliff, they now seem like they’re putting their foot down and speeding toward it.