Why I hope Jake Stringer fulfils his potential

Two seasons after looking like an utterly unstoppable force and one after scoring the goal that saved the 2016 premiership, Jake Stringer appears to be finished at the Western Bulldogs.

I first remember Stringer in the infamous last game of 2014, which the Bulldogs lost to a novice GWS by a goal scored with 16 seconds left. I saw him hard up on the boundary line not give a handpass to a better-positioned player and remarked that he maybe wasn’t that smart a player, but I was probably just projecting.

The game was tied with 40 seconds left when Stringer delivered a classic lead – and then dropped the lace-out chest mark to see GWS immediately sweep the ball down for the winning score. I saw him on his back in disbelief for the next minute after the siren. Never have I seen one simple skill execution as the complete difference between winning and losing a match in such a way.

It was all forgotten in his blistering 2015. There was the Adelaide final, the high-octane warm-up for 2016’s miracle. Stringer hobbled for a few minutes after our completely dominant start, breaking the positive vibes and opening the door for the Crows to perform one of the strongest against-the-run-of-play blitzings I’ve ever seen.

But in the last quarter Stringer drilled a beautiful symbolic goal from 50 metres and we were surely going to win.

Something happened in 2016. There is a highlight package on the internet called The 62 – Best Bulldogs Moments of 2016, and fully half of them feature Stringer time. He scored a stupefying goal against the Lions in which three Brisbane players end sprawled on the turf after Stringer bullocked through them all in his strange way, turning as slow as a barge yet still uncatchable.

But I’m working through all 26 of our matches and it turned out to be the first time he touched the ball in a month.

So it went on. He was unreal in the Adelaide rematch, with four goals and four assists – one a crazy tap to Caleb Daniel’s feet from the boundary line – allowed us to easily break 100 points for one of the very few times in 2016.

And then he disappeared again, for most of the rest of the year. He single-handedly decided the Port Adelaide and Richmond matches in dazzling last-quarter cameo minutes. And then nothing again.

Then the miracle. Stringer was the only player of the 22 who did not play at 110 per cent or even at 50 per cent of his potential in September 2016. Of course everyone else did and we won. But, once again, he scored two iconic, defining goals in the series.

They are identical. The first showcased the awesomeness of our handball game. Three-peat Hawthorn are on the ropes. Lachie Hunter dishes the handball to Jackson Macrae and is immediately collected. Macrae instantaneously dishes to the side and is also collected. And then Stringer uses his understanding of space and connection at the correct angle to kick just so while leaning at a 45-degree angle. Suddenly the score is 77-57 and for the first time we realise, this is truly, actually happening.

And then the last-quarter goal in the grand final. To this day I still cannot get my head around the sheer genius of Stringer’s goal against Sydney, without which, ahead by one point, there would possibly be no premiership.

Macrae’s handball is perceptive but nowhere near goal-scoring height. Stringer has three Swans half a second away from tackling him, yet he smoothly cradles the ball from left hamd to right hand and connects at the same angle he did the Hawthorn goal in a quarter of a second. He is not front-on to the goal either but at an angle. I do not see how the play was possible.

Bruce McAvaney had the perfect call, one of many that quarter: “Oh yes, he’s done it! The Package might deliver a cup!”.

Stringer can do everything when he gets the ball. I think his problem is that he doesn’t have any sense of where to run to in order to get that ball in the first place. He always leaps spectacularly for marking contests but never pulls down the mark.

Late in 2017 I remarked to my Dad, “This sounds nuts. I think Stringer will be traded in a year. Too inconsistent”.

It wasn’t nuts. Mitch Wallis seemed completely fed up with him in a recent radio interview, and as Luke Beveridge showed with Michael Talia, once you’ve lost him, you’re done at the Bulldogs – yet another trait picked up from the school of Alastair Clarkson.

He’s had a difficult personal year – after all, is still only 23, so there is still time to learn. I would keep him and try to harness the awesome power. But now with the private stuff he has going on he seems untouchable.

When we break up we theoretically wish a good life for our ex, but in reality it is emotionally gutting to actually see the prosper without you –but I don’t feel that way about Stringer.

If he crosses clubs and scores seven goals against the Bulldogs, as long as it’s not in a final I will accept it as simply the price to be paid for seeing a genius finally able to regularly use his talents.

How do the Dogs do the Josh Dunkley trade – or do they at all?

As Richmond steamrolled to another premiership on Saturday, putting an end to a season like no other, many teams were already planning their 2021 campaign.

How do the Dogs do the Josh Dunkley trade – or do they at all? 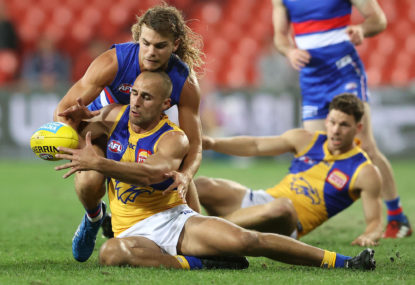 The Western Bulldogs are one of the league’s greatest enigmas.

St Kilda have survived a ferocious fightback from the Western Bulldogs to claim a thrilling three-point win and set up a date with Richmond in the AFL semi-finals next week.