Why Ben Simmons can win rookie of the year

After one of the wildest off-seasons in NBA history, filled with everything from trade rollercoasters to strange Twitter drama, anticipation for the start of the season is at an all-time high.

Even with the flurry of activity, one name is on the minds of Australian basketball fans – Ben Simmons.

The Melbourne-born Philadelphia 76ers’ forward is finally set to make his regular-season debut after missing all of last year with a foot injury.

It was a terrible way to kick off his NBA career, and there is essentially no hope of the 76ers going beyond the first round in the postseason in a conference where the ageless LeBron James acts as the gatekeeper to success.

On the bright side, Simmons’ absence last year does mean that he’s still eligible to compete for the rookie of the year award this season.

Winning this honour will be no easy task as the 2017 draft saw one of the most hyped group of rookies ever enter the league.

Players such as Lonzo Ball (Lakers), Dennis Smith Jr (Mavericks), De’Aaron Fox (Kings), Jayson Tatum (Celtics) and Simmons’ own teammate Markelle Fultz (the no.1 overall pick) are all wildly talented and are expected to make huge impacts on their respective teams.

This isn’t even the full list, as there are arguably more than ten rookies to keep an eye on.

The competition will be tight, and Simmons is no lock to win.

In fact, a recent survey of general managers saw them rate Ball as the favourite to take home the award, with Simmons coming in second.

Despite this, I feel good about Simmons’ chances.

Even during last season’s summer league, it was apparent that Simmons is massively talented and has what it takes to succeed in the NBA.

It won’t take long for him to be the best Australian NBA player, as the Matthew Dellevadovas and Joe Ingles of the world – while solid – pale in comparison to Simmons’ potential.

If he can just show a little progress in the weaker points of his game heading into the current season, he will be able to make a huge impact on the league and potentially even lead the young and exciting 76ers to a playoff berth in an Eastern Conference that seems weak outside of the top three or four teams.

Let’s take a quick dive into the strengths of his game.

Passing/Vision
Coming out of college at LSU, Simmons most talked-about skill was his passing ability.

Standing 208cm, he has rare vision for a player of his size. He excels when he’s able to put the ball on the floor and draw the defence in, allowing him to consistently find the open man for easy buckets.

He looks good doing it too, with a penchant for snappy, no look bullets that thread the needle and land perfectly in his target’s hands. A big forward with excellent vision inevitably draws comparisons to LeBron James, and we’ll see if Simmons can remind us of the Cleveland star’s younger days.

As Simmons will be playing a point forward role, he will spend the majority of his time on the floor with the ball in his hands orchestrating the 76ers offence.

His assist numbers should fill up the stat sheet as he is surrounded by talented players.

Star centre Joel Embiid, newly-added sharpshooting guard JJ Redick and the young Fultz are all dangerous players in space and should be able to rack up easy buckets with the room Simmons will provide for them.

Just a side note: it will be interesting to see how well Simmons passes out of the pick and roll. He never got the chance to run them consistently at LSU, and while great vision tends to carry over to all aspects of offence, it’s worth keeping an eye on.

Athletic Ability
As mentioned before, Simmons is a unique athlete. Despite being nearly seven feet tall, he displays excellent lateral quickness and foot speed while being an explosive leaper. This lends hope to the idea that he should be a versatile player on both sides of the ball.

While athletic ability does not guarantee success, it can allow a player to hold his own. At the very least, he should not be physically overwhelmed by the NBA’s elite athletes while he adjusts to the pace of the pro game. 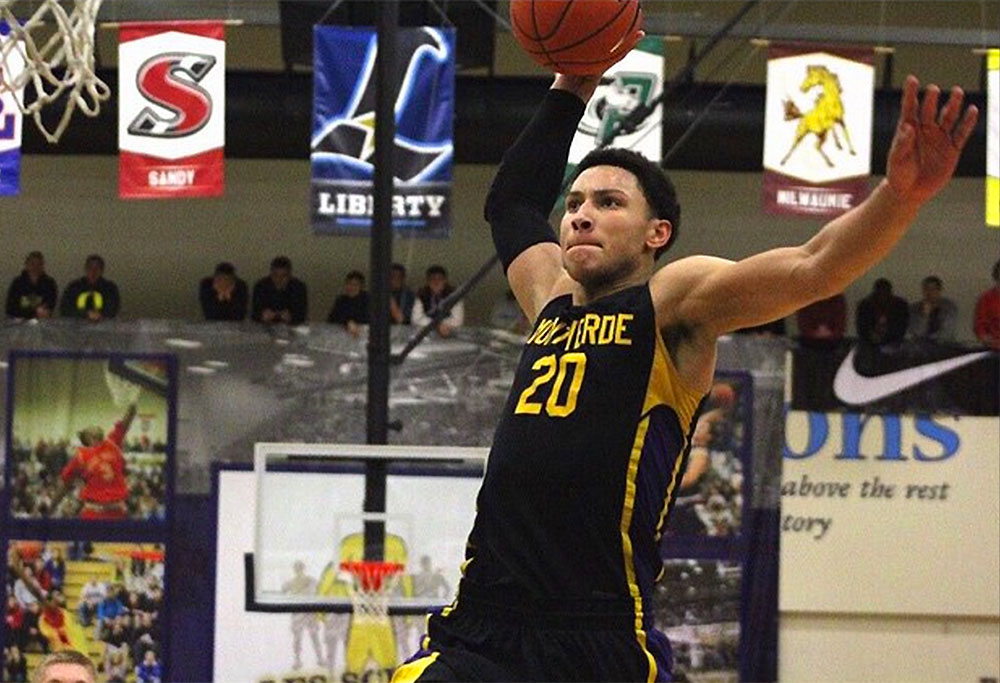 His size and speed combination will also create match-up problems for opposing teams. Forwards that guard him may be too slow to prevent dribble penetration, and guards that switch onto him can be backed down in the post.

Transition Play
Athletic players with great vision tend to be deadly in transition – look no further than James’ and Dwayne Wade’s reign in Miami as an example of the nightmares that explosive ball handlers with an eye for the perfect pass can create for their opponents.

Simmons checks all the boxes here: speed, leaping ability, court vision and a good handle. It’s not just all on paper either – he’s proven that he is at his best in transition.

He loves to push the pace and is uniquely equipped for this task.

Think of the Oklahoma City Thunder’s Russell Westbrook last season – the explosive guard would often grab a defensive rebound himself and jump-start the fast break himself.

Being able to get the rebound without waiting for your big men to get you the ball shaves off precious moments, allowing you to survey the floor even earlier and best figure out how to attack the defence before they can set up.

With Simmons’ size, we often saw him grabbing a rebound and charging ahead. He’ll never be as fast as Westbrook, but the attention he draws still allows him to find cutting teammates for easy buckets.

He supplements this by being a solid finisher around the rim.

With good athletes like Fultz and Robert Covington around him in the 76ers up-tempo offence, exciting fast break plays should be a staple in highlight reels this season.

His likely main competition for the rookie award in Lonzo Ball also excels in the transition game, and it will be fascinating to see which of them finds the most success.

But don’t be fooled – Simmons is young, and is not a perfect player by any means.

Luckily, the areas he needs to fix are more on the technical side, and those tend to be easier to improve in when compared intangibles such as court vision.

Here are the most obvious things that come to mind that Simmons could do better:

Shooting
It’s a fact that Simmons is not a good shooter, and I’d go so far as to say that he is a poor one.

His jumper is simply inaccurate, and if it does not improve this season, he’s going to have a rough time. When defences don’t need to respect his outside shooting, they can afford to sag off while guarding him.

This would make it difficult for him to beat his man off the dribble and work his way into positions where he can draw the help defence and find an open teammate.

Oddly enough, Simmons shoots jumpers with his left hand while clearly favouring his right for layups and floaters.

He is also strangely reluctant to use his left hand in close, as shown in this video where he incorrectly opts for a right-handed layup and gets blocked because of it.

I wonder if he may consider switching shooting hands if he can’t get a handle on his outside stroke this year.

Simply hitting from outside with a bit of consistency, such as reaching or coming close to the league average of around 35 per cent from three-point range, will go a long way towards keeping defences honest.

In turn, it will afford Simmons more opportunities to find space for passes in half-court sets.

Defence
Simmons put in poor defensive effort at LSU, and that critique of his game followed him into the NBA. However, he has the physical tools to succeed on defence, and it is possible that his poor play in college was simply due to a lack of motivation.

If coach Brett Brown can convince Simmons to buy into the strategy, it’s easy to see him developing into a plus defender. 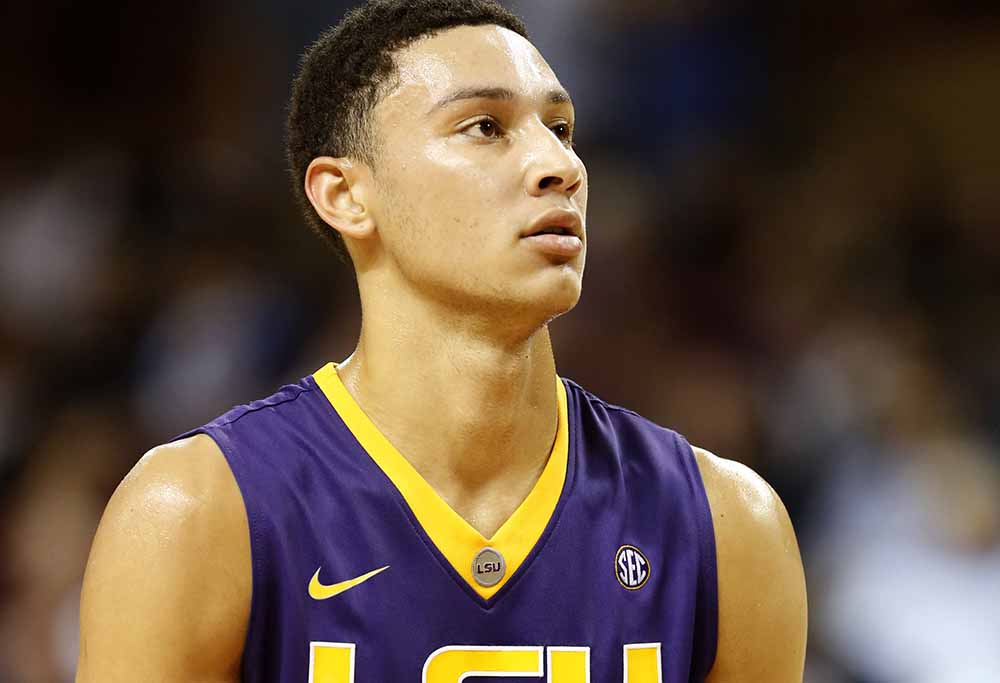 His unique athletic talents point towards him being a versatile defensive player. His lateral quickness and size should allow him to switch easily and hold his own against players at any position on the floor.

His leaping ability and length should allow him to contest any shot, rack up a fair amount of blocks and clean up on the defensive glass.

With all his strengths and some progress towards fixing his weaknesses, Simmons will be well on his way to becoming a superstar in the NBA.

While his immense talent makes it easy to imagine a world where he takes home the rookie award, the competition will be fierce.

The other rookies are not free of their own issues that could hamper their candidacy – for example, Ball suffers from similar shooting and defensive deficiencies, and Tatum probably won’t get enough playing time on a star-studded Celtics roster.

At long last, it’s time to see what Ben Simmons can really do against the likes of LeBron James, Kevin Durant and Anthony Davis in the best competition in the world.

Simmons’ first regular season game will be played in Washington D.C. against the John Wall and the Wizards on October 19.