The pink ball is creating problems and something needs to change

Imagine this. It is the second of December, 2017. You walk in to bat at the Adelaide Oval with your team score at 0 for 1 and Alastair Cook back in the pavilion.

With more than 1000 runs in county cricket this season and an unexpected recall for the Ashes down under, the team is looking for you to dig them out of this hole.

You take guard and face up to a rampaging Pat Cummins running in at full steam. You are calm and confident. His arm goes up at the delivery stride and you know it’s going to be on your stumps on a good length. You don’t care if it’s at 140k or 150k, you know you have it covered.

As the ball leaves his hand, you lose it completely. All you see is a flash of dark grey in the darkness behind the arm and then hear the clutter of your stumps behind you.

You are Gary Ballance. You are colour blind. And the pink ball has got you. Again.

In early 2014 when the pink ball was first being tested in the Sheffield Shield, the first questions had been raised about its effect on colour blind cricketers.

At the time, the response of the Cricket Australia spokesperson had been: “The advice we’ve received to date is that there isn’t any reason why a player with normal colour blindness would have any more difficulty seeing a pink ball compared to a red ball given its lighter colour and higher luminosity.”

Since then we have come a long way as far as the use of the pink ball is concerned. 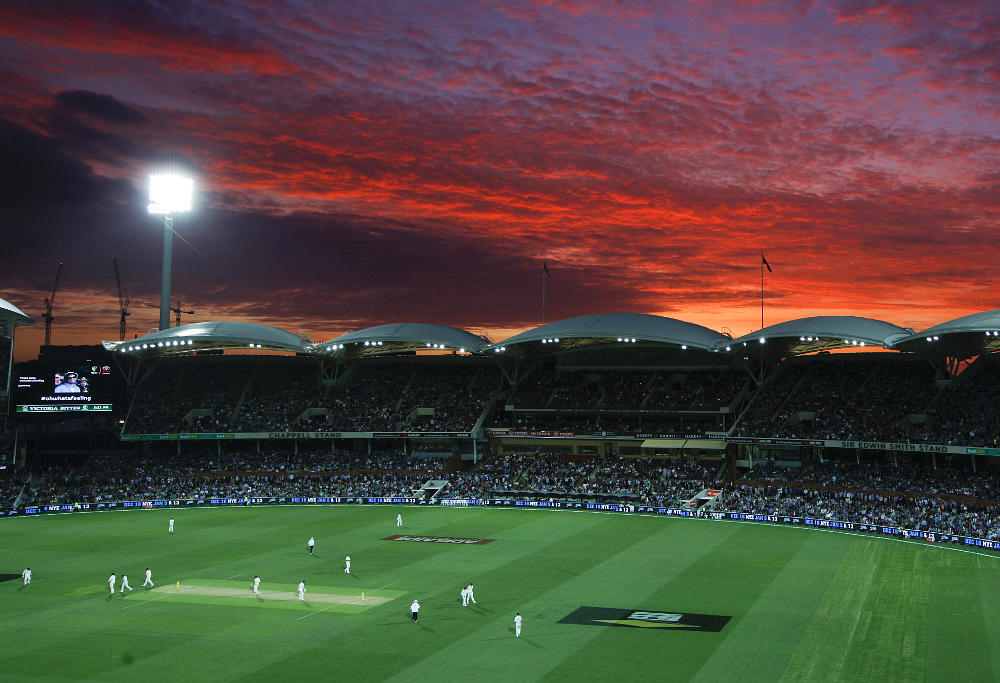 So far, the experiment that was primarily aimed at attracting bigger crowds to Test cricket by timing the matches such that fans could attend after work, seems to be working. More teams are getting involved, the fans are coming to watch, the ball is continuously evolving, the sponsors are happy.

But what about the players themselves?

In November 2014, Australian opening batsman Chris Rogers was forced to pull out of a Shield match between his home state Victoria and Tasmania because he was colour blind and could not see the pink ball.

He also had intermittent issues with the red ball against non-conducive backgrounds, but that had not prevented him from averaging over 42 from 25 Test matches, with most his Tests played between the age of 35 and 38.

For those of us with ‘normal’ vision, it is interesting to hear Rogers’ perspective: “As someone who is colour-deficient (I’ve learnt to stop saying colour blind), I knew the pink ball would not be ideal. It’s not a colour I tend to pick up that well. If I see someone wearing a pink shirt I’ll remember the next day what was on the shirt but won’t be able to describe its colour. It feels as if there’s a loose connection in your brain.”

Rogers goes on to describe his experience when he was asked to lead an MCC XI in an exhibition pink ball match at Abu Dhabi.

“The moment I realised just how much of a problem the pink ball would be for me came when I was in the nets facing Mohammad Nabi, who earlier this year was in the World Cup as captain of Afghanistan. We trained at dusk. Nabi was bowling his off-spin to me and I just could not see it. I was just way too early on it and I kept chipping the ball about two or three metres up in the air and having it landing a metre in front of me. I was just completely misreading it. It was bizarre.”

Rogers continued to say, “I was even worse in the match. I won the toss and was out in the second over. In the second I got to 18 but fell to a tall Notts paceman named Luke Fletcher, whose release point was about level with the top of the sightscreen. He bowled me a full toss and I simply did not see it. It hit me on the shin in front of middle stump.”

“Most people see the pink ball as a light colour,” he said, “but I later found out that colour-deficient people see the pink ball – I hope I’ve explained this correctly – as a dark colour. That’s when the administrators realised they couldn’t use a black sightscreen because for colour-deficient people it’d just be a dark ball on a dark sightscreen.” 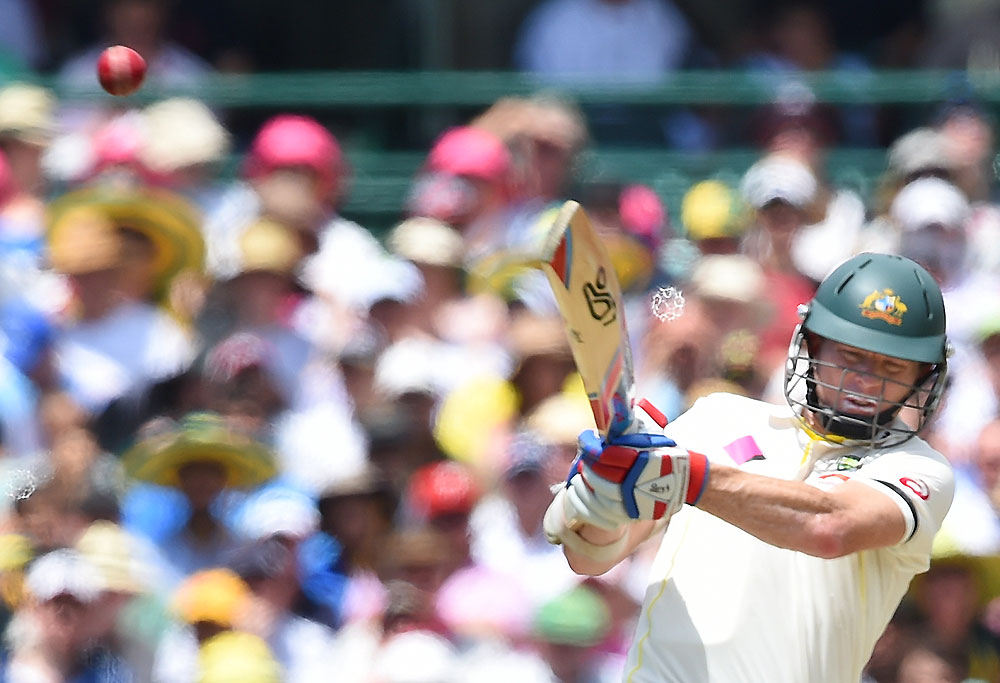 So what is it about colour blindness that creates this problem with sighting the pink ball?

The mildest type of colourblindness is Deuteranopia, which takes out most shades of red and pink and turns them into a green. A red dress, provided that its light, will turn into a sort of dull shade of army green. Greens are also darker and duller, turning to light greys and brownish-green camouflage colours.

Protanopia is more severe. Instead of turning red to green, it shuts some shades of red off completely, making them appear black or grey. The darker shades of red are grey-black, and even the lightest shades of pink change to army green or darker.

Chris Rogers has the latter, which explains his complete inability to see the ball, but he is far from being the only one. His colleague from Victoria and Australia’s current wicketkeeper, Matthew Wade is also colour blind and struggles with the pink ball. But he has coped with it a bit better because he has a milder form of the deficiency and has been able to adapt.

In 2016, Wade was selected for Australia’s Day/Night Test against South Africa. Wade said before the match “I played pink ball at Adelaide Oval last year in a Shield game, so it’ll be interesting to see what it does in the Test arena. You’ve just got to get used to it. I think it’s trying to get it out of your mind. I can see the colour of the ball, I pick it up. It’s just at times it takes a little bit longer to work out the depth of where it’s coming.”

Wade clearly adapted well. In that match, he had to his credit six catches and a stumping. Not bad for a bloke who can’t identify the colour of the ball.

But then Wade has two factors in his favour – he has a milder form of the deficiency, and being a wicketkeeper, he has a bit longer to sight the ball than a batsman with the same disability. It is not possible to judge from his score of 4, whether Wade had difficulty while batting in Australia’s first innings in that Test, but one suspects it was not as easy for him to face up to Vernon Philander and Kagiso Rabada as it would be for his colleagues without the same condition.

Gary Ballance has a condition that is closer to Rogers’ than to Wade’s i.e. he struggles to see the ball at all, where the pink ball often appears the same colour as the pitch.

As captain of Yorkshire, Ballance was keen to play Surrey in the County Championship match this year. The problem? It was a day/night encounter to be played with a pink ball. Before the match, speaking to reporters, he said: “It’s not ideal, the last time I played with it, I struggled to see it. I’m going to have a few net sessions with it and if I can’t see it, I can’t see it. There’s nothing I can do. If you can’t see the ball, you can’t play cricket.”

Fortunately, a brilliant 180 not out from Kumar Sangakkara and bad weather ensured that Ballance was not required to bat. At Adelaide, he will be. 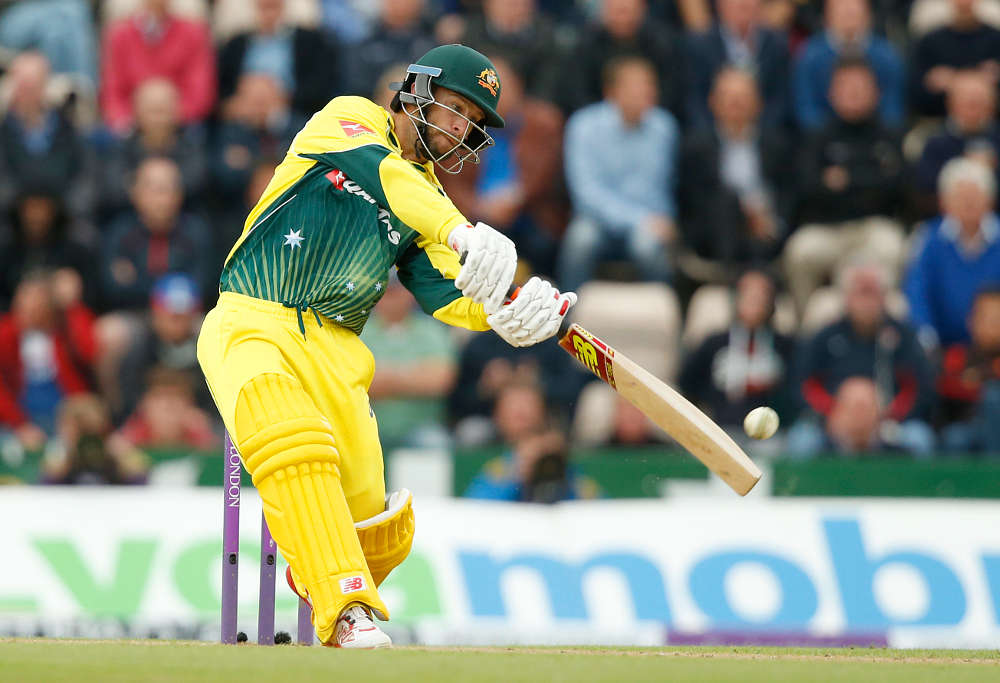 Colour Blind Awareness has written to the England and Wales Cricket Board (ECB) demanding it review the use of the ball which it says is very difficult to spot for people with the condition. It has warned that the ECB could be even failing colour blind cricketers under equality employment legislation because the visual impairment is seen as a disability.

“In the UK there are approximately three million people with colour blindness,” the letter says, adding that that equates to possibly one colour blind cricketer in each team, 1,125 spectators at England versus West Indies Test at Edgbaston, and thousands watching that match alone on television around the world.

This makes it a broader issue. Not only do players on the field have an issue, which could make a wider adaptation of the pink ball a career-ending move for some, but spectators report they can’t spot the ball, which could potentially be a bigger problem for the sport.

What is the future of Pink Ball Cricket at Test level?

While it is true that the latest innovation comes with its challenges, there is no doubting the fact that it is a move in the right direction. The world has evolved such that cricket today needs to compete for audiences with all the other entertainment. Hence, the possibility of drawing in crowds after working hours is something that Test cricket can only ignore at its own peril.

One in every twelve Caucasian men and one in every ten Indian origin men are colour blind. In the UK, Australia and New Zealand, in purely statistical terms, its likely that one player in the national team and at least 4000 spectators per Test match (assuming 100,000 come to see the match over the five days) will not be able to see the pink ball.

In India, Pakistan, Sri Lanka and Bangladesh, assuming similar spectator numbers, 5000 audience members will be frustrated by their inability to follow the game as they normally would, and at least one player each on the subcontinent teams will be unable to see the pink ball.

The only way to overcome this is to continue to innovate and ensure that the technology applied to the ball, the surroundings, and indeed the telecast of the matches makes playing and watching this version of the game a level playing field for all.