A-League crowds are a concern, even if the football is fine

The A-League can ill afford another season of stagnation just because those who run the game are preoccupied with hanging on to power at all costs.

Sydney FC picked up where they left off last season as two Bobo goals either side of Michael Zullo’s ferocious half-volley helped see off a spirited Wellington Phoenix 3-2 in an entertaining clash at Allianz Stadium.

There was something new about the fixture – a 7pm Sunday night kick-off – and something we’ve seen plenty of before, namely empty seats.

There was nothing wrong with the football on display. So why did so few fans choose to go see it?

Those who insist we should focus on the action instead of the attendance are missing the point. There won’t be any action if the A-League isn’t self-sustaining.

And right now, after two rounds of reasonably impressive football, it seems that some fans have missed the memo.

That’s not to criticise the supporters who do show up at games and tune in on TV. If pointing out where the A-League can improve is purely an act of navel-gazing, then it’s also an exercise in preaching to the converted.

One of the most frustrating aspects of the A-League is not that it lacks passion on and off the pitch, but rather that it’s such a tough sell to convert new fans to the game.

Compare the round we’ve just watched to the snorefest that was Manchester United’s trip to Anfield to face Liverpool on Saturday, and the A-League comes out looking pretty good.

There was plenty to admire across the five games of the weekend, from Massimo Maccarone’s first A-League goal to Danny De Silva controlling the midfield for the Mariners, to a feisty Melbourne derby and an enthralling draw in the Hunter.

And the big crowd that showed up at McDonald Jones Stadium on the back of the Newcastle Jets giving away thousands of free tickets proved that sports lovers will come out for the A-League if you give them an incentive.

The problem is that it all just seems so difficult to do. Take Friday night in Brisbane as an example.

On a noticeably humid evening, Brisbane Roar and Adelaide United played out an absorbing contest on a pristine surface at Suncorp Stadium, with foreign signings Maccarone, Daniel Adlung and Johan Absalonsen particularly impressive for the two respective sides.

Trouble is, the match kicked off at the awkward local time of 6.50pm, making it tough for some office workers and those who live outside Brisbane to make it in time for kick-off – especially given the city’s notoriously heavy Friday night traffic. 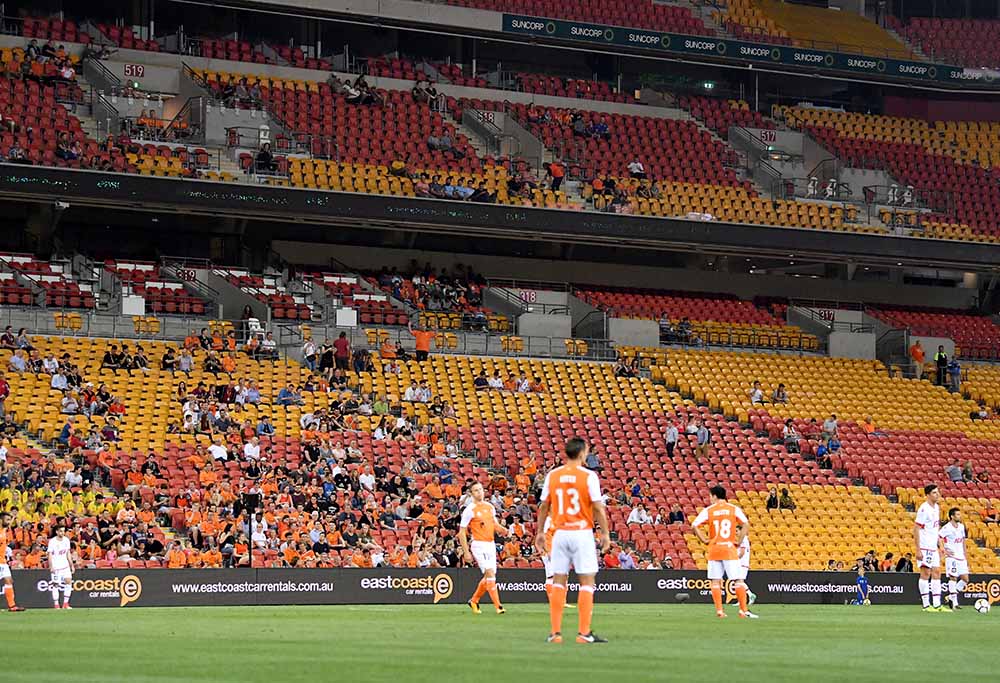 But given the lack of daylight savings in Queensland, the kick-off time is a necessity if all of the Friday night fixtures across the country are to start at the same time on Fox Sports.

And with the broadcast rights now bringing in some $57 million a season, is it any wonder TV companies should feel entitled to dictate which times they think will generate the largest audiences – including Sunday nights?

There have been numerous complaints about Network Ten running ads during breaks in play in their broadcasts on One – surely a bigger concern is that they’re showing it in Standard Definition – but wasn’t the goal to get the A-League on commercial TV in the first place?

There’s a bigger issue at play here – one that may take a FIFA normalisation committee to help resolve – and it’s the fact that Football Federation Australia is so heavily embroiled in a power struggle, they appear to have very little time for the football itself.

It’s safe to say the marketing around the new A-League campaign has been largely non-existent.

So it is that we’re left once again to lament a lack of fans filing through the gates.

The derbies always help. If only we could convince some of those fans to come back again the following weekend.