Will Tejay van Garderen ever be a general classification threat?

Most general classification (GC) riders are eagerly awaiting the official route presentations for next year’s Grand Tours to determine their likely schedule and goals for 2018. Tejay van Garderen will be one of them.

Van Garderen has had somewhat of a breakout year in 2017, even though he has already been on the WorldTour circuit for several years, finally winning his first Grand Tour stage – Stage 18 of the Giro d’Italia.

At 29, he has not fulfilled his early promise or lived up to the expectations of team owners or directors sportifs, but he’s now coming into the prime as a Grand Tour rider.

Early in his career, Van Garderen was seen as the great hope of US cycling, with the ability to climb mountains and time trial, as well as the tactical awareness to win races. Importantly, he was seen as the cyclist to finally pierce the mythology of Lance Armstrong.

In his first season as a pro, he came third in the Critérium du Dauphiné – the key lead up to the Tour de France.

However, the next few years were inconsistent.

He went from winning his first major stage race (Tour of California) and coming fifth in the 2014 Tour, to disastrous 2015 and 2016 editions.

In 2015, he abandoned the race in the last week while in third place due to a virus. Twelve months later, he spectacularly imploded during the last week for no apparent reason and finished 29th overall.

You need to be a special kind of rider to win a Grand Tour – consistent, on your game, and focused for three long weeks. This is the problem for Van Garderen.

In 2015 and 2016, he abandoned three of the four Grand Tours in which he participated and failed to be competitive in the one he finished.

Van Garderen cannot keep his focus for six hours a day over 21 days. He either crashes, picks up an infection, virus or some type of medical isssue, or struggles to get his bike over the consecutive mountain stages.

In contrast to his struggles, his main competitors have excelled. Vincenzo Nibali has won all three Grand Tours across different years, while Nairo Quintana, Tony Dumoulin, Thibaut Pinot and Romain Bardet have either won or finished on Grand Tour podiums. 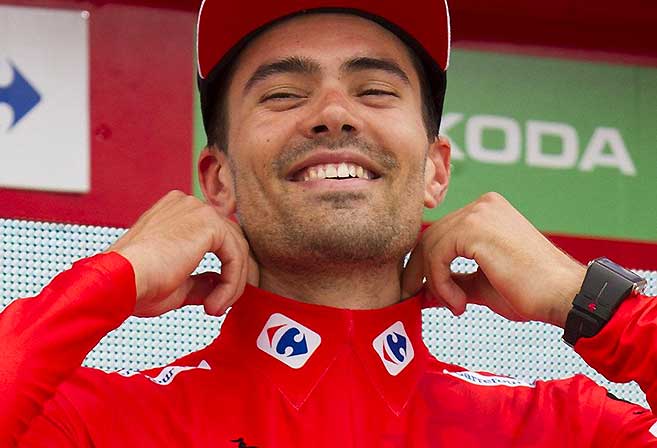 Tom Dumoulin looks like the next great GC rider – the title Tejay was supposed to take up. (Team Sky)

After stage 12 of this year’s Giro and well out of contention, Van Garderen told journalists, “Maybe I am not a Grand Tour rider.”

His time-trial abilities had let him down, and he’d struggled on the first really difficult mountain stage, the Blockhaus.

But his attitude changed after winning the race’s queen’s stage, Stage 18 into Ortisei.

After the victory, he told journalists, “I still think I’m capable of doing GC in a Grand Tour in the future, I’m not going to give up trying for that.”

Van Garderen has finally won a stage of a Grand Tour. A difficult mountainous stage at that. But one stage win does not make a Grand Tour rider.

In fact, he seems to be better suited to shorter stage races, rather than the three-week efforts. It’s a bit like Australian Michael Rogers, who etched out a successful career focusing on shorter races and stage wins, while being a super domestique for his team’s GC rider.

Van Garderen is not a Grand Tour GC rider – he has slipped behind Richie Porte and will also probably slip behind Rohan Dennis in the pecking order at Team BMC – but he is capable of winning races and stages.

After the official route presentations for 2018, Van Garderen should sit down with team bosses to refocus on shorter races and supporting Porte in his efforts to defeat Chris Froome and the Team Sky juggernaut.