How to spice up the Bledisloe dead rubber? Give Quade a run

The lead-in this week has been loaded with coaches, players, ex-players and pundits churning out the fluff.

Apparently there is no such thing as a dead rubber. The All Blacks are wary of an improving Wallabies.

The Wallabies can make a huge statement by beating the All Blacks. The Wallabies need to make a fast start again. They can get the monkey off their back.

It could be the start of a new era. It would help erase some of the bitterness from the protracted Super Rugby axing saga that led to the Western Force’s demise.

None of that is going to get a pulse back in the Bledisloe body. After winning the two Tests during this year’s Rugby Championship, the clash in Brisbane on Saturday night has all the anticipation of a senate sub-committee inquiry into GST reform.

There’s no narrative to infuse excitement into the contest.

This match needs not only Don King to give it a bit of zing, but Dana White, The Rock, Nick Kyrgios, Shane Warne and Dennis Rodman.

How would I spark up the dead rubber? Who could act as a defibrillator? Quade Cooper.

We all know his history against New Zealand, right? A sneaky shot on Richie McCaw, sledging the Kiwis, getting under their skin. Public enemy No.1 in the Shaky Isles. And he was born in Auckland!

So why not pick him for Saturday night’s clash?

Yeah, I know, it reeks of desperation. It’s a tacky way to promote a Test match.

Jordan Uelese got the nod on the back of 28 minutes of Super Rugby for the Melbourne Rebels. 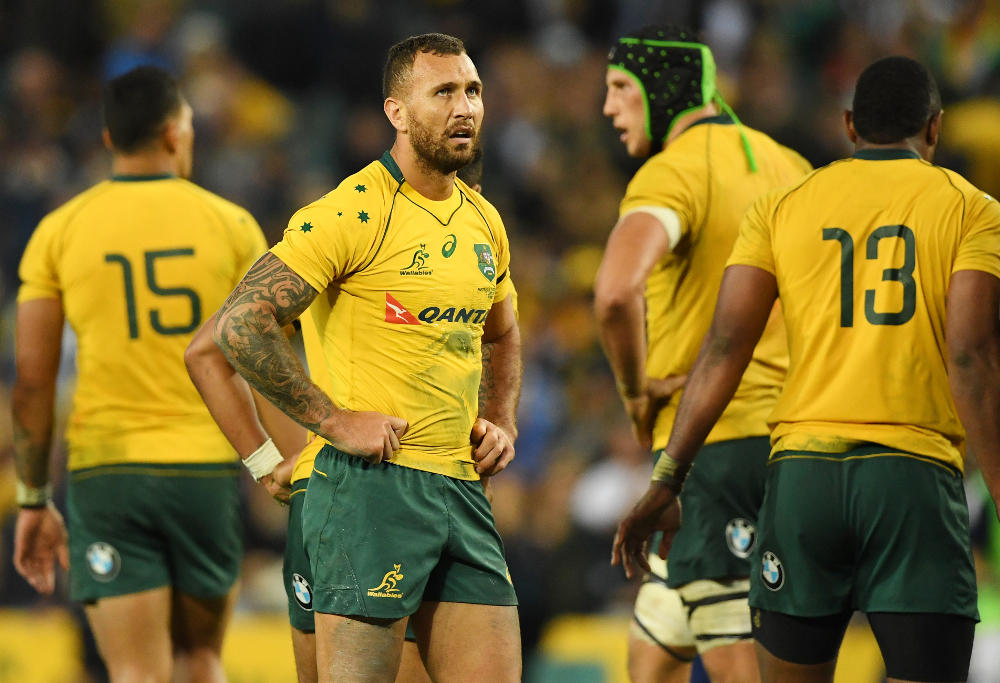 It wouldn’t be ridiculous to pick Quade again. It’s not like picking someone randomly off the street – you know, the way Quade’s boxing crew pick his opponents.

He’s still the second-best specialist five-eighth in Australia. If Bernard Foley went down injured, perhaps Cheika would go for Kurtley Beale at No.10. But he’s blitzing it at inside centre.

Quade has got plenty of chances for Australia and muffed quite a few, but there’s not too many jumping over the top of him as Foley’s back-up.

Put Foley on the bench. Give Quade 50-60 minutes to show his manic best and worst. Foley is one of Australia’s top-tier players, so handing him a bit of time off isn’t the worst idea with a European tour on the horizon.

Another way to add some appeal – or more accurately, romance – would be to start the retiring Stephen Moore at hooker. It will be his 125th Test match, but last in front of his home fans in Brissy. He’s a grunt man – not a crowd-puller – but it would give another angle to promote the dead rubber.

There’s room for a bit of showbiz in professional sport, right? Wins bring money. So if you’re not winning – and there’s commercial pressure – shouldn’t the door open to other ways to get the fans engaged?

And these potential selection scenarios pose the question: is there a point in rugby where stability and pragmatism can make way for shameless promotional imperatives and naked commercialism?

Is there room for a coach to be told to not pick his best team, but pick a team that will potentially add thousands more bums on seats and many more sets of eyes on the TV coverage?

Surely a dead rubber is a chance to do that.

Moreso these days, we are told that players are being picked with a view to the next World Cup. Or others are being rested because of the arduous workloads.

So not selecting a best XV is already happening. In the Kiwis’ case, when they made mass changes for their trip to Argentina last month, that wasn’t even a dead rubber. You certainly get a bit of leeway when you’re winning.

Coaches often have to become skillful at selling a message when at a team announcement – one of the most obvious ones pretending to rest a player when in fact they’ve been dropped. The coach has got to be seen to be sticking up for his players publicly.

So perhaps making some selection shocks in the name of blatant promotion – such as picking second-best Wallabies five-eighth and No.1 most-maligned-by-New-Zealanders Quade Cooper for a dead rubber – isn’t as far-fetched as it sounds. It’s just all in the sell.