The tiny nation of Fiji gained a seat at the table of rugby league heavyweights after joining the big three as a semi-finalist at both of the last two world cups.

Mick Potter has taken on the head coach role and believes the Bati are capable of lifting the Paul Barriere trophy on 2 December.

Fiji’s first foray into rugby league only began in the early 1990s, but the South Pacific nation has appeared at every World Cup since 1995. In three of those campaigns (1995, 2000 2013) they were pooled with Australia and England, which certainly wasn’t a favourable draw, but that didn’t stop the Bati from asking the rugby league world whether the big three was now the big four at the end of the 2013 RLWC.

The sport has enjoyed a period of sustained growth on the back of their world cup semi-final appearances. Fiji National Rugby League are now hoping to replicate the success story of the Papua New Guinea Hunters by entering a Fijian team based out of Suva into the NSW Cup.

Since their 2013 RLWC semi-final defeat to the Kangaroos, Fiji has played Test matches against Papua New Guinea, Tonga, Samoa and Lebanon at season’s end or during the annual Pacific tests, and their only two defeats were two-point losses in tight contests against Tonga and Papua New Guinea over the last two years. They go into this World Cup campaign ranked seventh in the world, and Mick Potter is set to unleash an attacking arsenal thanks to a potent backline, which includes the return of Jarryd Hayne. 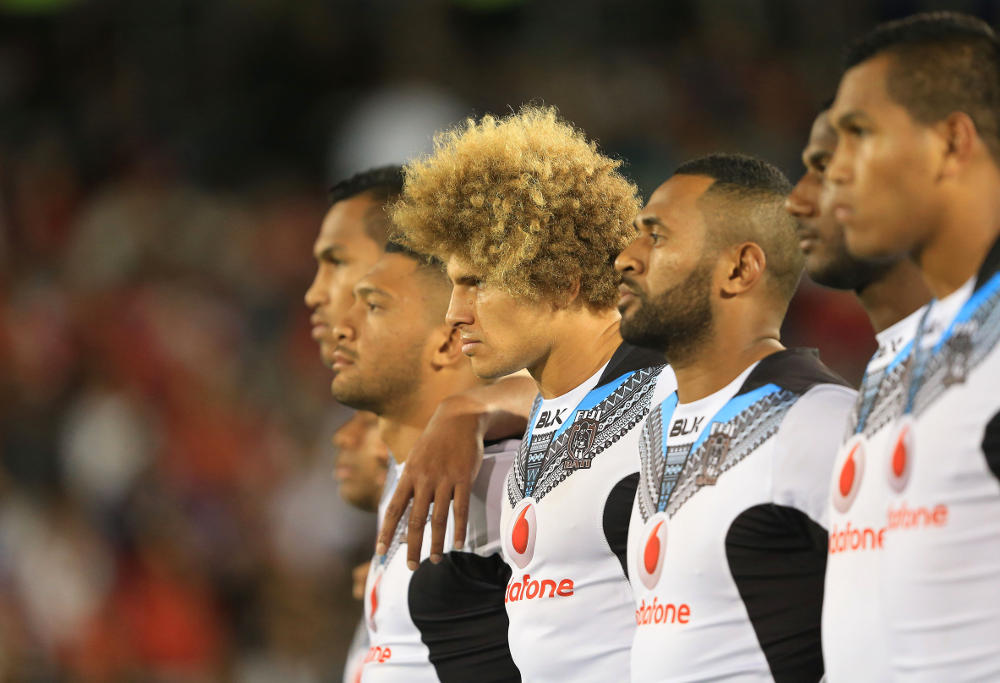 This is a different mix of players in the squad compared to the one that was selected by Rick Stone. Potter’s forward pack on paper doesn’t come across as strong as that of the 2013 Bati, but it still contains a mix of youth and experience from across the NRL and Super League with the inclusion of the Sims brothers, Kane Evans, Jacob Saifiti and Manly number nine Apisai Koroisau. Like most Bati sides, the backline is once again electric with Fijian flyers such as Suliasi Vunivalu, Akuila Uate, Taane Milne, Marcelo Montoya, Jarryd Hayne and captain Kevin Naqaima.

Key player
This choice is likely to cop a fair bit of flak, but I can’t go past the enigma that is Jarryd Hayne. Hayne first came to prominence as a superstar of the sport while representing the Bati in 2008. He has himself openly credited the experience with Fiji during the 2008 RLWC as a moment that defined him as an individual and an athlete. He was scintillating during that tournament, and the following year he produced an NRL season of individual performances that fans had rarely ever seen before or after.

In 2009 his individual performances led Parramatta to the grand final and he captured the Dally M medal along the way. In 2013, as an established star of the game, he was selected to represent the Kangaroos. After a period of inconsistent performances the world cup was again a turning point for Hayne’s career as he was one of the stars of the tournament and, like deja vu, he captured the Dally M Medal the following year as the competition’s best in 2014.

The World Cup is the big stage and it seems to bring out the best in Hayne. If history is about to repeat itself, fans are in for an exciting six weeks and the Bati are set for another very successful campaign.

Key match
Fiji has been drawn against three opponents that they have never competed against previously. All three matches are must-win games due to the nature of Pool D, with only the top seed progressing through to the knockout stage. It may well come down to the game against the Italians in Canberra. The Bati will get a chance to showcase their talent on Friday night against Italy, and the match may be the decider as to who tops the pool.

RLWC 2017 prospects
Fiji exceeded the expectations of all experts at the previous two world cups and they go into this tournament without the same hype as the other Pacific nations, and that’s exactly how Mick Potter would prefer it to be. The side has plenty of X-factor and individual brilliance in that backline to win games, and I believe they will feature in the finals once again and could reach their third straight semi-final.

There is confidence in the Bati camp, with Korbin Sims declaring earlier this week that the only fear the side has is God. The faith in the side is there for everyone to see, and regardless of where Fiji finish, one of the highlights of this world cup will be the start of every Fiji game as the Bati belt out their hymn. While the pre-match war dances the other Pacific sides produce are a spectacle on their own, the Fijian hymn produces goosebumps on each occasion, and you can bet the pride and passion on display transfers onto the field, providing Fiji with a great platform for success yet again.

It’s no secret the refs tend to get some calls wrong in some eyes. Take for instance, for the controversial ending of Newcastle’s close defeat against Manly at Brookvale 14-12. I personally think it could have been a penalty but Tevita Funa was never going to get the ball nor any Manly player. I think […]