Dour, defensive and dominant: The keys to City

Melbourne City have had a superb start to the season. They are the only side to record four consecutive wins, including an impressive derby victory over neighbours Melbourne Victory, and conceding just one goal in the process.

They have shown great improvements in their defensive solidity.

In contrast, under previous coach John van’t Schip, City were more notable for their tactical flexibility.

Van’t Schip constantly changed the formation to get the best out of key players. For example, in 2016-17, with Harry Novillo and Bruno Fornaroli in devastating attacking form and Aaron Mooy emerging as Australia’s best playmaker, the coach switched to a 3-5-2 formation that freed his front three to play together upfront.

New coach Warren Joyce is a different kettle of fish.

A former Manchester United academy coach, Joyce describes himself as “honest, competitive, meticulous on small details and enthusiastic”. In the first four rounds of the new season, it’s clear Joyce has worked hard on City’s defensive shape. Subsequently, they have developed a reputation for dour but effective football, having taken the third-least shots of any team but converting 18 per cent of these, wihch is fourth-best in the league.

Without the ball, City defend in a 4-4-2 shape. The role of the front two, similar to Sydney FC and the Wanderers, is to take up narrow starting positions, positioning level with the opposition deepest central midfielder to prevent forward passes centrally from the centre-backs. The wingers tuck in alongside the central midfielders, in positions where they have the ability to press the opposition full-backs when they receive. 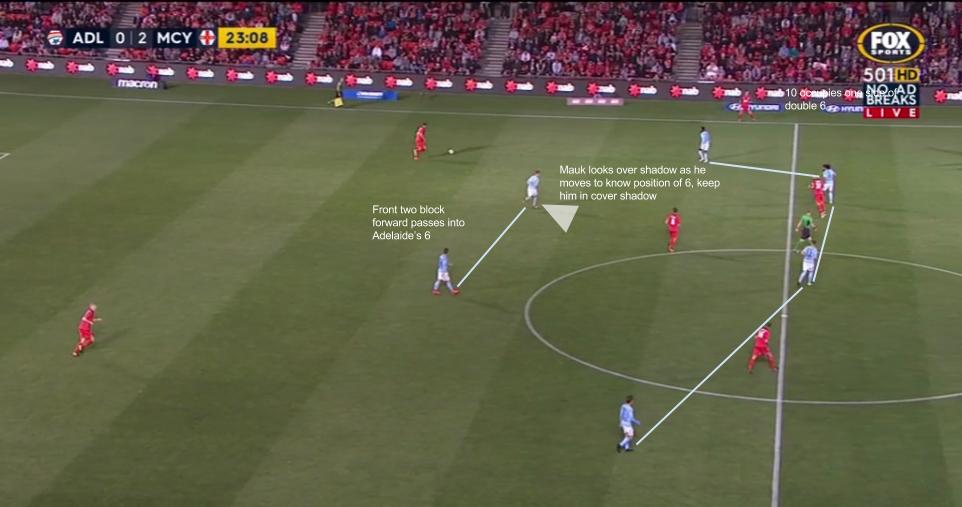 While City’s defensive shape is similar to other teams in the league, they have used a cover shadow, which refers to the space covered (or blocked) by a player when they press an opponent.

Cover shadows occur naturally when players are positioned on the pitch but are deliberately ‘used’ in pressing to block passing lanes and force the opponent into a certain pass, or area of the pitch. In the context of City’s defensive shape, in their central starting positions the front two cover shadow the opposition midfielders. If they move forward to pressure a centre-back, they check their shoulder as they start their pressing run to ensure they are keeping the central midfielder in their cover shadow.

The front two constantly check over their shoulder to know the position of the 6 and keep them in their cover shadow as they press pic.twitter.com/Hdrujm00mP

In both scenarios, the winger is pressing the ball diagonally, so they can block a pass with their cover shadow to make play predictable. When this happens, teammates move into a position where they can press the opponent about to receive and force a turnover.

We can see all these aspects in the following scene. The front two (Stefan Mauk and Ross McCormack) are positioned centrally, blocking forward passes into the base of midfield. When Taylor Regan plays into Michael Marrone (Adelaide right-back), Nick Fitzgerald (City left-winger) presses with a diagonal run, using his cover shadow to prevent a pass into central midfield, forcing the play backwards.

It is this moment, with the cue being Fitzgerald’s specific pressing run, where Osama Malik should be in a position to press the Adelaide midfielder on his first touch. As it turns out, he is unable to prevent his direct opponent playing forward on his first touch, so Adelaide can play forward quickly.

How Melbourne City use cover shadows to block passing lanes and make play predictable in their pressing pic.twitter.com/GlM0rmjAKE

It is telling that despite City making small mistakes in this pressing moment, they still win the ball back, with good numbers around the ball to press any pass between the lines. Generally speaking, they have defended well using this approach so far this season. That is primarily because Joyce has stuck to a consistent formula, asking the side to defend collectively with intelligent use of cover shadows – despite sometimes changing formation (as he did against Adelaide, switching to a back five after the red card).

Sticking to a consistent XI has also helped the side find familiarity and cohesion with each other. There are players in the current starting team like Fitzgerald, Malik and Manny Muscat, who might not be the most talented players in the squad, but who will work hard and stick to their tasks. It is telling that Joyce is using Malik and Michael Jakobsen together in midfield, as it shows his priority is to make the side hard to beat.

The epitome of the emphasis on energy and enthusiasm over craft and guile, and even star quality, is that Mauk – a hard-running midfielder who made his name with trademark runs from deep – is currently the #10, because of his discipline and awareness, which suits this defensive system.

Mauk has barely made a dent going forward; in fact, overall, City have not impressed much in open play with the ball. Four goals have come from set pieces (including every goal in wins over Wellington and Adelaide), while two of Bruce Kamau’s three goals in the opening two games were deflections.

Joyce says the style will evolve: “We have been organised and shown effort and enthusiasm, and we have to build on that and dominate the game more with the ball now.”

Whether City can continue in their current winning form remains to be seen – hosting Sydney FC this week will reveal a lot – but nevertheless, Joyce has put a solid defensive foundation in place to build on this season.