The 2017 Melbourne Cup was taken out by Rekindling in another two-horse duel down the straight, narrowly overcoming Johannes Vermeer.

On the turn there were two clear bunches – the leaders and the fanning backmarkers trying to find a lane to run home. As the leaders weakened, the brave Johannes Vermeer was gradually worn down, with Corey Brown judging the ride perfectly to pull away by a long neck.

Winner: Team Williams
Last year, we said the Lloyd Williams legend grows stronger and it’s becoming a theme. As the owner, he grabs a big trophy and a handy prizemoney pool from running both first and second.

Credit to him and his team: they don’t just have great horses – his stable also had last and second-last, with Gallante and Bondi Beach both gone a long way from home. It takes a serious amount of also-rans to manage to get six runners into the field.

It’s a single-minded approach, it costs a fortune, and while the Melbourne Cup is fortunate to have such support, it’s starting to look a little like Lloyd’s plaything.

In the last few years, we said connections of horses like Heartbreak City (second, 2016) would be kicking themselves for not having a run in Australia before the race.

This year, Rekindling had a very long preparation that put the miles into his legs. There’ll be some postmortems for the also-rans that weren’t as fit as him.

There’s now two arguments for punters who use this as their guide: go for a rethink, or hang on to this rule that’s produced one win in the last 24 years. For me, it’s still going to be preferable to see a horse run here before the main event, but it’s no longer a must.

In fact, the connections of Marmelo were unsure if they’d taken the edge off him by running the horse in the Caulfield Cup. If, buts, and maybes, but I’m leaning towards this not being as important in future as long as they’ve had a solid prep.

Winner: Jockey Corey Brown
The winning ride is always the best ride, is it not? The man from Wingham got the job done on Rekindling in his second Cup victory, after Shocking in 2009, and he’s been in the placings four times including a second.

My count is that he’s only missed the top ten placings once in the last dozen years. He’s a positive-factor on a Cup horse, that much is clear.

Here’s what he said after the race, as everything went right.

He gave me a lovely ride. We settled midfield on the fence then were able to pinch a couple of runs coming to the 1000. I started to think about getting off the fence as we were moving towards the home turn and then a run appeared which we took. He was full running when we got to the top of the straight and Hartnell was under pressure to my outside so we snuck up inside him, took his run and then it was a matter of waiting and not going to early. We came to the 200 and I gave him a couple of slaps and he gave me plenty back. Super effort.

Winner: Trainer Joseph O’Brien
Father Aidan O’Brien has tried and failed for years to win this race. Young Joseph turns up and wins at his very first try. The apprentice gets one over the master, and made it look easy for Ireland. Strong performance!

It’s a rather extraordinary career that we’re witnessing. He rode 30 Group 1 winners as a jockey, mostly to Dad, including So You Think in the 2012 Tattersalls Gold Cup. Ten of those Group 1s were classics. 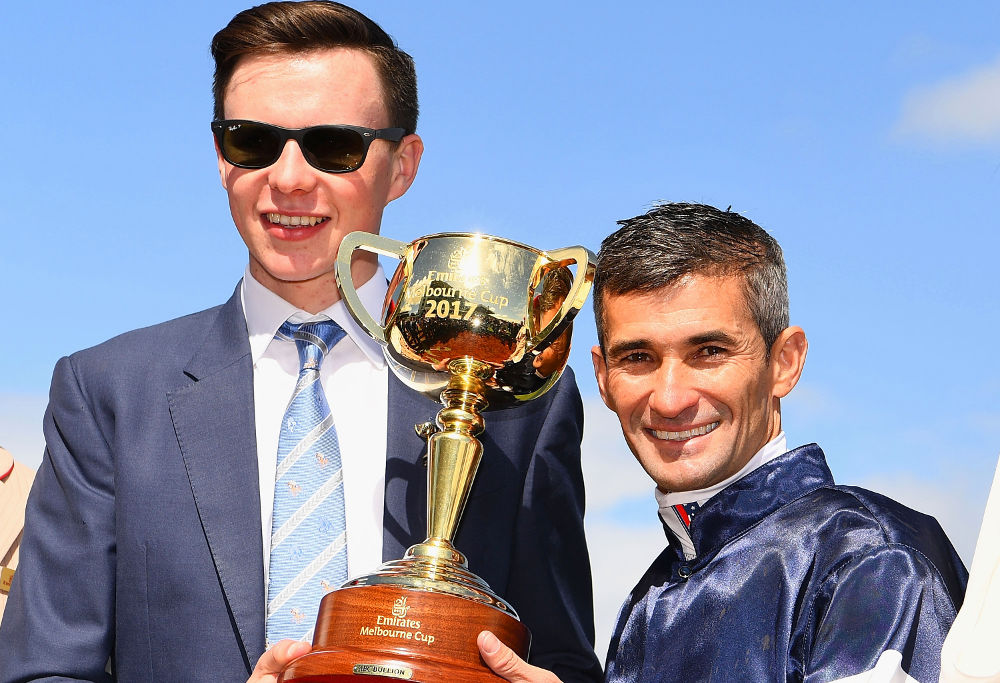 Winner: Inside Barriers
Barriers don’t always matter in the Melbourne Cup but this year the first four finishers ran out of barriers 4, 3, 2, 5.

Winner: Caller Matt Hill
Great performance from Matt Hill in calling his first Melbourne Cup. He’s a great professional, has a good eye for details, and it’s clear he’ll be set for a long career at the top.

Loser: Frankie Dettori
Frankie Dettori. Yet again a hugely disappointing ride. He had Almandin sitting three-wide the trip and Kathy O’Hara complained that her mount, Single Gaze, was bashed by Dettori in the first 200 metres.

The champion jockey’s 16th cup, on the favourite Almandin, was a complete failure and punters on last year’s winner had the best ride in the race in 2016. This time could’ve torn their tickets up at halfway.

Dettori could turn it all around next year, but it’s a disaster again.

Historical references
Rekindling was the youngest winner since Skipton, in 1941. The son of High Chaparral became the first northern hemisphere born three-year-old to win the Melbourne Cup since Comedy King in 1910. Joseph O’Brien was also the youngest trainer in history.

There were plenty more factors including the recent dominance of slightly older horses, with six-year-olds having much of the luck recently.

Anyone going off historical factors alone won’t have had much luck here.

The backmarker stayers
The race wasn’t run to suit the stayers coming from the back and really only Thomas Hobson made considerable ground late, but from way too far back. He was quite good all said, especially considering he had a ring-in jockey after Joao Moreira was stood down by doctors.

The tempo in the race was very stop-start – initially quick, before slackening off, and then becoming a sprint later.

That ruined the likes of Marmelo, Wall Of Fire, and Red Cardinal.

Ouch – last year it was champagne and caviar here on The Roar with a win and a first four, and this year we’re singing for our supper.

What happened? My strongest tip in Almandin raced “flat”, according to jockey Frankie Dettori, who also gave him a horror run.

My next best in Marmelo was fairly flat as well. Trainer Hughie Morrison said the following before the race:

“I am worried, of course I am worried about him backing-up [from his first-up run in the Caulfield Cup],” Morrison said.

“He has been on the go all year, he was fresh and feeling good in the Caulfield Cup.

“Sometimes a horse can, what we call, bounce where they run very well the first time and then a bit flat [second-up] and we’ll only find that out on Tuesday afternoon.

“We think we’re happy with the way he is though you can never guarantee it.

“I don’t think anybody should be going into a race where there are 24 runners and a handicap (with too much confidence), there is so much luck involved.”

I think he bounced! Wall Of Fire didn’t enjoy the pace of the race from his wide gate, and Humidor isn’t a 3200m horse as we speculated (but the Winx form was too good to resist). Ventura Storm “got his tongue over the bit” in the post-race findings so he didn’t breathe and therefore did nothing.

But those are excuses. All in all, what this shows me for future is to feel free to bet early on speculative horses where the odds are available. I had Wall Of Fire and $61 and Who Shot Thebarman at $151 very early on, and those bets remained good value bets.

The key to Rekindling was a good weight, which old wise Roarer kv joef explained to us, and is worth a read both now and in the future. He also had a nice barrier, a positive ride, and a focus on the Cup from ownership which helps.

I don’t want to labour this but the race is extremely fluid. The final formguide has some big late factors with the how the track is playing, surface, speed and tempo, and barrier draw. One of the trusted form specialists I follow and try to learn from in Luke Murrell, from Australian Bloodstock, completely re-did his reading of the race after Derby Day, and was the better for it.