Saint Nick's retirement, a chance for St Kilda to bury its demons

The response from Saints fans to their club’s recent tweet as to a suitable successor for recently retired great Nick Riewoldt’s no.12 was unsurprisingly emphatic.

The idea of anyone being worthy of Riewoldt’s number is unthinkable for a fan-base that has enjoyed a symbiotic relationship with the 336-game Saints idol since his debut in 2001.

The headline-grabbing response was one fan’s call for the club to go a step further and bury Riewoldt’s jumper in the middle of the Saints’ spiritual home of Moorabbin.

On the surface a one-off, light-hearted take. But on reflection, perhaps an insight into the collective subconscious of a tortured group of supporters who have endured one of the most traumatic 20-odd year periods in AFL/VFL history.

So deep are their wounds that their icon’s jumper – and the desperately painful failings of their beloved club that it has come to represent – may have to be consigned to the earth rather than hung triumphantly from the rafters.

After all, this is a club that hands out hurt with its official merchandise.

The consecutive 2009 and 2010 grand final losses are the most recently inflicted – and still red raw – scars sported by Saints fans.

2009 is often cited as the more painful of the two. The Saints were the form team and but for their profligacy in front of goal, Tom Hawkins’ outrageously allowed poster and Matthew Scarlett’s toe poke, the Saints win the flag.

And yet what could be more painful than the sight of the ball bouncing away from Stephen Milne a year later. In that moment, an epic victory for the finals-hardened Saints was reduced to an ideal warm-up game for the superior – but relatively inexperienced – Pies ahead of the eventual grand final replay romp.

Go back further to the 2004 preliminary final in Adelaide and Riewoldt’s first foray into the pointy end of the season. The Saints lose an epic clash against a notoriously finals-shy Port Power team and the chance to knock off a bleeding Brisbane Lions in the grand final. It wouldn’t have been the Saints if Brent Guerra hadn’t come within a whisker of equalising in the goal square in the dying stages.

Throw in the cancelled Harvey-Burke-Loewe-Winmar coronation in 1997 after the Saints squandered a half-time grand final lead against the upstart Crows.

Consider this heartbreak against the backdrop of a few booze-soaked social club highlights in the 1980s and a premiership drought going back to 1966, and you wonder how Saints fans manage to get out of bed each day.

The great injustice is that, through a combination of talent and tenure, this misery has ultimately become Riewoldt’s cross to bear in spite of his storied playing career. If he isn’t defined by his club’s near misses, then they certainly form a large part of the Riewoldt narrative.

Perhaps no better demonstration of this was the collective awkwardness felt when his younger cousin Jack won this year’s premiership with the Tigers. 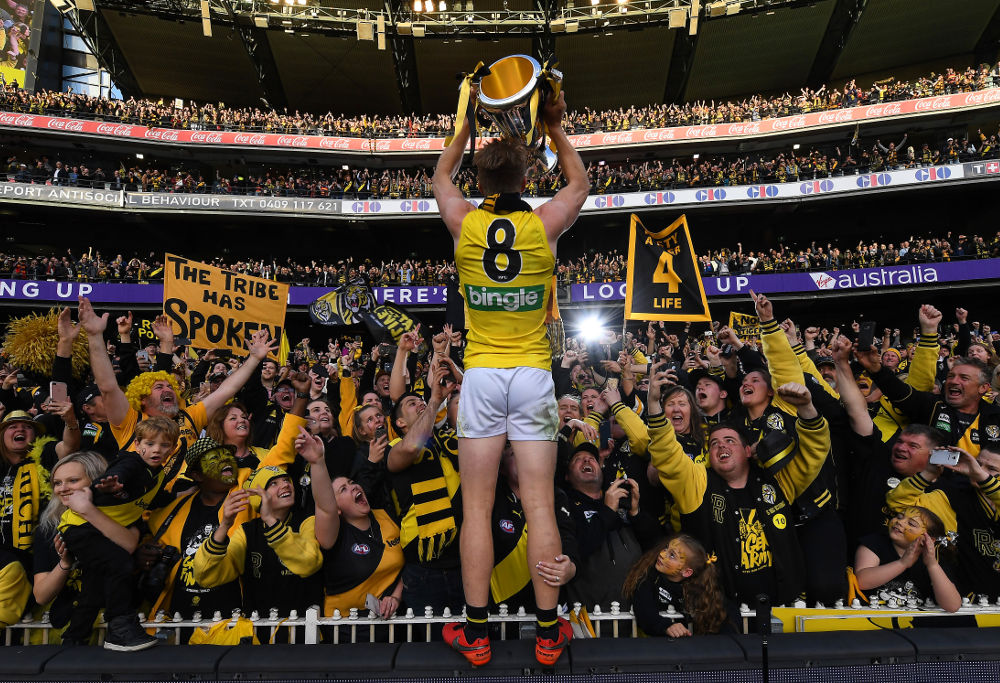 The inverse is that Riewoldt – particularly as the club’s only real modern day figurehead – has come to cast a shadow of sorts over his beloved Saints.

After all, it’s difficult to disassociate the current Saints outfit from previous tragic incarnations so long as Riewoldt is leading up a wing.

Viewed through this lens, Riewoldt’s retirement represents a fascinating juncture for the Saints.

Without its spiritual leader and largely shorn of veterans, the club’s stuttering rebuild has effectively lost its training wheels and will be squarely in the spotlight.

Yet – whether ultimately successful or not – at least the next generation of Saints will enjoy relatively clean air. That’s thanks to Saint Nick taking his heavy cross into retirement and with it, his club’s demons he came so close to exorcising.