If history tells us anything it’s that you never write off the Illawarra Hawks nor a team coached by Rob Beveridge.

Now on a four-game winning run, the Hawks continue to show that never-say-die attitude, meaning you can’t deny they could go all the way this season.

The Hawks continue to battle above their weight in the NBL, including a semi-final and grand final appearance the past two seasons, while some of the big-spending teams in the league, led by the Sydney Kings and Melbourne United, haven’t come close to going all the way.

Beveridge, too, has proven himself an all-time great coach in the NBL overseeing a rebuild at the Wildcats to win a title in 2010 before only being stopped by the New Zealand Breakers from adding to that over the next three years.

Now in his third season at Illawarra, he had built enormous self-confidence within a team that doesn’t have the budget or resources available in Sydney, Melbourne, Auckland and Perth. It’s that heart and desire that continues to take them a long way.

That’s why nobody at the Hawks was panicking when they lost four of their first five games to start the season. Only two of those were at home, making the 1-4 record look worse than it was.

With Illawarra facing three games on the road after that, they needed to find something. Anybody that knows the character of a player group including Rotnei Clarke, Nick Kay, AJ Ogilvy, Mitch Norton, Tim Coenraad, Oscar Forman, Rhys Martin and Kevin White knew they would.

Throw in the ultimate player’s coach in Beveridge and this Hawks team looked too good not to respond.

Especially considering nine of the 11 players reached the grand final last year and they look to have significantly upgraded with new imports Demitrius Conger and Delvon Johnson.

The turnaround began in style with a 31-point hammering of the Brisbane Bullets in Brisbane. Two days later they had to work hard for it, but the Hawks overcame the Sydney Kings to win 93-83.

They then looked down and out last Saturday night in Adelaide in a rematch of last season’s semi-final. After being 15 points down early on, they flicked the switched and finished on fire to win 96-87.

That gave them three straight road wins to improve to 4-5 heading into Round 7.

The Hawks found themselves in another hole Thursday night on their home floor against a Kings team now including last season’s MVP Jerome Randle and centre Jeremy Tyler.

Illawarra were 19 points down but ended up prevailing in overtime with a 97-93 victory. 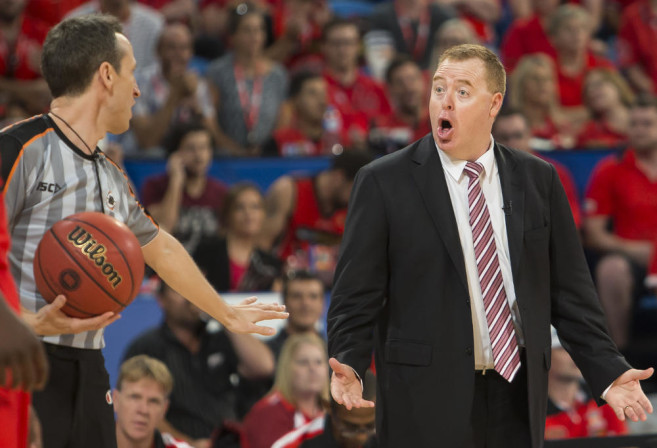 That improves the Hawks to 5-5 and again with just three home games out of those 10, they are well positioned to be a real title threat once again this season.

They mightn’t be in the limelight like the top three teams New Zealand, Perth and Melbourne, and they likely will continue to fly under the radar, but that suits Beveridge and the Hawks just fine.

They are more than happy being underrated and written off by the rest of the league. That only adds to their motivation to prove everyone wrong and to take extra satisfaction as the wins rack up.

With genuine superstars in Clarke and Conger, and a strong Australian core led by Ogilvy, Kay, Norton and Coenraad along with captain White and warhorses Forman and Martin, it is a team that you write off at your peril.

After Thursday’s overtime win against the Kings, Beveridge was beaming with pride about the team that he has at his disposal.

“When we play for each other and are totally devoted, it’s amazing what can happen. We did that against Adelaide last week and that showed that the guys could do it. So then this game, even when we were down by 17, we were just saying to the guys that we had to free ourselves up,” Beveridge said.

“The first half was a very poor performance and we got totally outplayed. They were really good and then come three quarter-time after we had our arses handed to us on a plate, the character of these guys is just amazing.

“When I look back at a lot of the teams that I’ve coached, these guys are just amazing people. We knew we had a horrific start to the season with the amount of road games and I told the guys they can either use it as an excuse, or use it to create some unity in the group.

“We selected a group of guys who are high-character people and that’s a massive thing for this group. At times it’s my job to remind them to play loose and to relax, and enjoy the game a lot more. This group is a pleasure to coach. Everyone has each other’s back, it’s amazing.”

The Hawks look to keep things going on Saturday night in Cairns ahead of a two-week break with the FIBA window next weekend creating a general NBL bye.

Round 7 will also be highlighted by Jerome Randle’s return to Adelaide on Saturday night and a blockbuster Sunday battle between Melbourne United and the Perth Wildcats.