How will the Socceroos perform in Russia?

The Socceroos were clearly the better side against Honduras in their recent home-and-away play off series and deserved their 3-1 aggregate victory and one of the last spots in the World Cup.

Four World Cup qualifications in a row is a great achievement and the team and supporters will rightfully celebrate.

However, thoughts will soon turn to Russia in 2018. Ange Postecoglou and members of the Socceroos have all said, during the qualifying phase, that the change in playing style was intended to not only qualify for the World Cup but to make a mark on it when they arrived. The core of this team played in the last World Cup in Brazil so they should be better prepared this time around. So, what’s the Socceroos pass mark in Russia?

Firstly, a lot depends on the draw in early December. The Socceroos world ranking of number 43 gets them a spot in the lowest pool of teams, so it’s guaranteed that the three other teams in their pool will be ranked above them. Luck will have a lot to do with it and it would surely be better for the Socceroos to be selected with Russia, Croatia and Egypt rather than Germany, Spain and Denmark, both of which are possibilities.

Past World Cups give us some idea to the future. Germany in 2006 was a golden age for Australian football, with the likes of Mark Viduka, Harry Kewell, Mark Schwarzer and a young Tim Cahill heading up a very strong team. A win over Japan and a draw with Croatia saw Australia progress to the round of 16 knock-out stage. A very soft penalty awarded to Italy, and that’s paying it more respect than I should, ended Australia’s tournament. 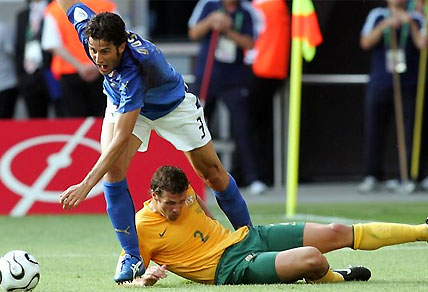 In 2010, a draw with Ghana and a win over Serbia wasn’t enough to get to the knock-out stage, with the 4-0 loss to Germany in their first game setting a large negative goal difference that the Socceroos couldn’t overcome. Having Tim Cahill and Harry Kewell sent off during the pool games didn’t help either.

After two good results in 2006 and 2010, a World Cup Brazil draw against Chile, Netherlands and Spain proved too tough for the Socceroos in 2014 and they went home winless. Ange Postecoglou was appointed very late in the process, following the sacking of Holger Osieck after the Socceroos were beaten 6-0 in warm up games against Brazil and France.

The combination of a young, inexperienced team and a tough draw unfortunately went as many had expected.

I get the feeling that this time will be different. The Socceroos will need to address their goal kicking woes from open field play but the likes of Tim Cahill, Aaron Mooy and Tom Rogic should be able to create and convert more chances.

Australia’s defence has been suspect at times but the return of Mile Jedinak to the team, in a defensive midfielder role, resulted in a much more stable defence against Honduras.

A lot obviously depends on the draw but I think the Socceroos of 2018 could cause a few shocks in Russia and be very competitive in their group, challenging for a spot in the knock-out stages. They will be under very little pressure, with most offshore media writing them off completely. They won’t mind this lack of attention and will likely use it as motivation.

If they don’t win a game, we can at least console ourselves that Australia made the World Cup. Chile and the Netherlands, two of our pool games in 2014, and Italy, weren’t as fortunate.