The alternate World Rugby Player of the Year list

The criteria must have been headlines and clicks collected rather than actual output at the international level.

But what strikes home most reviewing this list against past winners is this group does not get close to the quality of the complete players of the past, players who were not only the best of their time, but who also had few flaws.

This reviews the nominees game output and suggests an alternate list.

Beauden Barrett and Owen Farrell
We’ll first review these two head-to-head based on their performances in the British and Irish Lions series of this year.

The common narrative, by both British and New Zealand press, was that Barrett struggled to deal with a rush defence while Farrell was the driver of the Gatland inspired twin playmakers which got the Lions back into the series.

Favorite Stats; Owen Farrell kicked 11 goals in three Tests, with a three-metre run up this means he ran more metres moving in to kick than he did with the ball in hand.

Also, three of his four defenders beaten came in the second Test – after his opposing number was sent off.

Beauden Barrett
Despite the above, I have no idea how he made the list this year. There has only been one back-to-back winner and that was Richie McCaw, so he ain’t winning the big gong.

He missed more than enough kicks in the Lions series to win it comfortably and has not shown anywhere near the required level of game management this year to be eligible for this award.

Still capable of moments of absolute genius, not sure anyone else in the world catches Hogg during that Scotland game, but World Player of the Year form? Not even close. 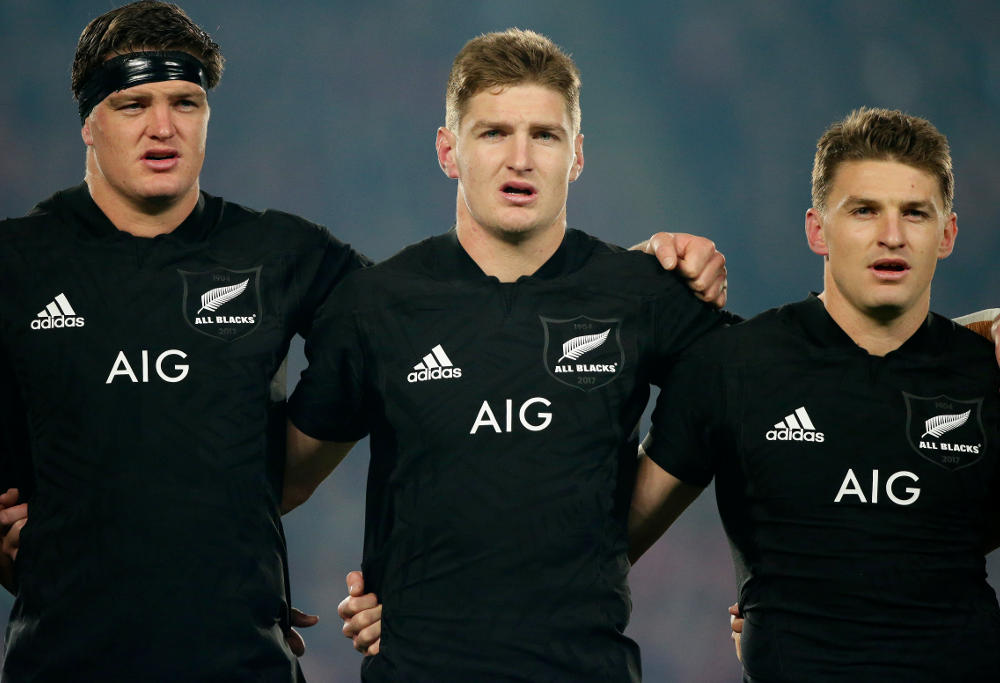 Owen Farrell
I have no doubt he is the best goal kicker in the world and kicked superbly in the Lions tour of New Zealand.

If you ever need someone to kick for your life this is the phone call to make. So, give him a little plinth with a ball on it and award him for what he is.

But as the world’s best player, he is well short. No sort of attacking threat at all and in the big games that really mattered this year, he disappeared.

The Ireland grand slam game and the third All Blacks Test he got targeted and failed, missing six and five tackles respectively.

His kicking from hand in the third Test was also poor, registering the only air swing seen this year.

Wouldn’t mind a pint for every time he was caught behind the gain line this year.

Maro Itoje
Media darling Maro is an athlete extraordinaire with a great vertical jump, but do his performances get him onto this list?

In the six nations he largely played at blindside, and while his leg speed allows him to make a high number of covering tackles, he conceded an awful lot of channel metres during this series.

A competent effort for a guy playing in his second position, but world class at blindside – simply no.

The Lions series was an interesting one for him. Prior to him getting on the park during the first Test, the Lions’ lineout had operated at 100 per cent.

With Itoje calling the lineouts, that fell to 75 per cent for the remainder of the series.

Again, like Farrell, he largely disappeared during the key Test, making only four tackles over the 80 minutes.

If this was not enough to exclude him then his actions during the Australia match last week seal it.

When Kurtly Beale knocked on, Itoje came from way back, waving his arm in the air at the referee calling for a yellow card, soccer style.

A pathetic effort, and not one befitting a world player of the year, and enough to exclude him for that single action. We are seeing way too much of this now and it needs to be stopped.

Reiko Ioane
A brilliant first-year effort, Ioane has shown some wonderful finishing skills this year and his conversion rate has been good.

But he is obviously still learning. During the second Lions vs All Blacks Test, they continued to make space out wide even with 14 men and Reiko lacked the gravitas to demand the football.

On the current tour we have seen the All Blacks run a number of winger insert plays and their go-to guy has been Naholo for these.

I would think he is a slam dunk for Emerging Player of the Year, but a potential winner of this award? Not this year.

Israel Folau
Based on performances of the last 12 months, Folau is the only one on this list I would consider as a worthy nominee, and for two primary reasons.

Firstly, his try collection numbers are just so prodigious it’s impossible to ignore. Secondly, this is a real comeback story. 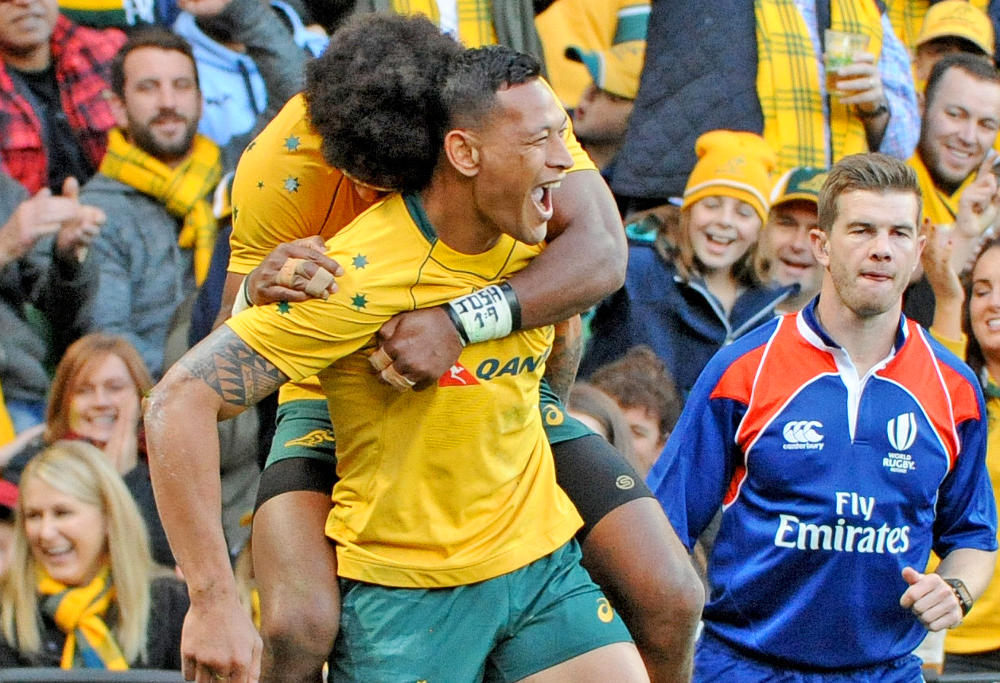 The Wallabies’ Israel Folau has enjoyed an enormous resurgence in 2017. (AAP Image/Joe Castro)

Prior to the Fiji game, Folau had not scored a try in a winning Wallaby side since 2014. This year, he has scored against everyone he has come up against.

But to stick with the theme, his long-standing flaws remain and they did cost the Wallabies points this year in multiple games. Still not complete World Player of the Year material.

The alternate 2017 World Rugby Player of the Year nominee list

Jonathan Davies
There was an awful lot of noise out of England when he was named Lions centre.

No doubt that if one person swung this series, it was Davies.

He is an intelligent defender, picking his times to push out of the line superbly, and who knew he had the kind of leg speed to run down Laumape in a series-deciding action?

You would normally want a wider body of work to win this award – same issue as Joe Launchbury – but he would be a worthy winner such was his mid-year.

Johnny Sexton
There are defining moments in many a career, and when Sexton missed that kick in Dublin which should have secured their first ever win over the All Blacks, one wondered if he would ever recover.

Well has he what. In my opinion, the premier flyhalf in world rugby right now.

A colossus in Chicago – I know it doesn’t count for this – and when it mattered in the Ireland vs England Grand Slam and in the Lions game, he stepped up as Farrell stepped aside.

In the six nations game he played a controlled game and made six tackles without a blemish, the same number as Farrell missed.

In the third Lions Test he was a warrior. He got belted twice, but both times he got up and gave the Lions enough control to stay in a match that could so easily have got away from them.

Would include him in the quinella.

Sam Cane
This is what the modern flanker looks like.

He owns the narrow channels without peer, his tackle technique is textbook and there was a noticeable difference in the All Black ruck defence when he was absent.

He is a constant force at ruck time, not a huge stealer of the ball but that is not a modern game requirement for the seven.

He is a primary ball carrier in close, not huge in terms of metres but always to the gain-line, his pass numbers and link play are excellent, especially off the back of the lineout and he has become a viable fourth or fifth jumping option.

Scores and supports just enough tries to ensure you can’t take your eye off him either.
As an indicator, he threw three times as many passes and had more carries than Sean O’Brien did in the Lions series, which would surprise most.

An excellent season and hard to find fault with his skill set or execution this year.

Sekope Kepu
It really was Kepu to the rescue for the Australian scrum this year, not only regaining his starting place but also being an ongoing stabilising influence in a scrum which has continued to suffer on the loose head side and with its replacements.

He has largely become a more disciplined player around the park, makes his tackles and must be close to the best ball carrying tight-head in the game.

Tight forwards are an exception at the top table when the awards are handed out but Kepu should be in the conversation.

Again, no genuine weaknesses for his position and a big impact season.

Joe Launchbury
How the hell was this guy not a British and Irish Lion?

You would think that not making this tour should exclude him, but I am not so sure.

In an English side that wobbled more than once in the last Six Nations, he was of a consistently high standard and a pillar around which the side was built. He has really developed an engine for a big man, has good tackle numbers, rapidly improving hands and a really solid set piece.

Good to see he returned with a Man of Match performance against the Wallabies.

Even with such few games, a worthy nominee.

These nominees might not generate the media inches and clicks World Rugby desires, but they are all top-drawer code exponents for mine, and surely that should still be the primary criteria.