Cahill must get his priorities straight before the curtain comes down

Far from wrangling with his club, Tim Cahill should be intent on addressing the only gap in his storied career by helping Melbourne City win the A-League title.

For all the international and personal accolades accumulated by Cahill over twenty-odd years of professional football, his club career has been perversely pockmarked by team-centric disappointment.

This is not an attempt to denigrate his standing in the game, which in any event is unimpeachable. Rather to highlight a prize that would round out a legacy befitting – in many fans’ eyes – this country’s greatest ever football product.

Few would doubt that Harry Kewell and even Mark Viduka enjoyed a higher ceiling at their peak. Many would point to Craig Johnston’s bursting trophy cabinet.

Yet, Cahill’s mixture of consistency, longevity and big game heroics – particularly in Socceroo gold – is arguably unsurpassed by his fellow countrymen.

His story is well told.

Cahill first popped into the national consciousness via his star turn in Millwall’s FA Cup run in 2004.

We then marvelled at the quality of Cahill’s eight-year stint with a highly competitive Everton outfit in the EPL. In fact, it’s a wonder a gold-encrusted cast of his forehead has not been erected in the blue half of Liverpool such was his propensity for scoring vital headed goals for the Toffees.

His scoring record in Merseyside derbies in particular was a demonstration of his uncanny ability to perform on football’s biggest stages.

The stage set on a sunny afternoon in Kaiserslautern in June 2006 the equal of any. With the Socceroos down 1-nil in their opening World Cup group game against Japan, a sleepy Australia watched in wonder as their talisman scored a match winning brace as a second half substitute.

Such heroics for the national team have earned Cahill an unrivalled place in Socceroo lore ahead of a likely swan song at next year’s World Cup in Russia. 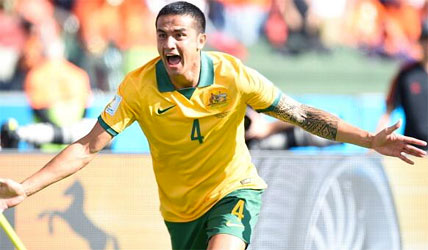 Yet, an incongruous and often overlooked footnote to such an illustrious career is the litany of near misses at club level.

This is not to ignore the Lions’ English Second Division crown nor last season’s FFA Cup win for City – in which he scored the winner no less – that have bookended Cahill’s career to date.

But the Cahill-club narrative is defined more by heartbreak than silverware.

Some will counter that to judge the success of a club like Everton on trophies is unfair. After all – the Leicester aberration aside – it is extremely unlikely for these clubs to win the EPL.

Yet that doesn’t ease the pain of Everton losing the 2009 FA Cup final to Chelsea and with it the rare opportunity for a consistently valiant top four fringe dweller to be marked in time.

For Cahill, a second FA Cup runners-up medal after the aforementioned Millwall Cinderella story ended in defeat to Manchester United.

The New York Red Bulls move was an opportunity for Cahill to collect silverware free of the shackles of the EPL’s entrenched pecking order. Despite teaming up with an ageing but timeless Thierry Henry and the Red Bulls boasting the best MLS record in 2013, three spluttering finals campaigns meant Cahill left the Big Apple empty handed.

Against this backdrop, Cahill’s current spat with Melbourne City over greater playing time ahead of the World Cup is puzzling.

Cahill’s singular focus on the Socceroos is admirable and will only swell the goodwill enjoyed by the Cahill brand in this country.

But in perhaps the last season of his career, the 37-year-old oddly finds himself at a cross roads.

He can guarantee himself a (in any event likely) spot in a mediocre Socceroos squad which will do very well to advance out of the group stages in Russia.

That or blindly devote himself to driving Melbourne City to A-League title glory and ensuring a club career commensurate with his place in the rarefied air of Australian football.