When eras end they tend not to slowly freeze over but rather they go up in flames. So it has gone for the Grizzlies, ground down to near ash, a 7-4 start that felt too good to be true quickly revealed to be too good to be true. They have since lost 11 games in a row and their coach, and now sit at 7-15, 13th in the Western Conference and a game behind the Phoenix Suns.

Memphis has long felt like the NBA’s most magical smoke and mirrors act, with two stars waving majestic wands to obscure the very real truth that their teammates just weren’t very good. Sometimes, like last year for a famous stretch, one magician can perform a solo act for long enough to stay alive until the other returns. This year, though, magic has finally been burned down by frustration.

A team that has started Jarell Martin, Mario Chalmers and Andrew Harrison has been unable to break past the wall that starting players of that ilk regularly builds. The Grizzlies are only 4.5 games out of the playoffs – where mortal teams like Utah, Portland and New Orleans currently occupy the desired real estate – but something, beyond the coach being fired, feels final about this wretched stretch.

Marc Gasol isn’t the same, Mike Conley might never be the same, and Chandler Parsons certainly won’t ever be the same. Tyreke Evans is a fine renaissance project and suddenly a terrific player again, but he isn’t the All-Star he looked like at the beginning of November.

What is left is not much. 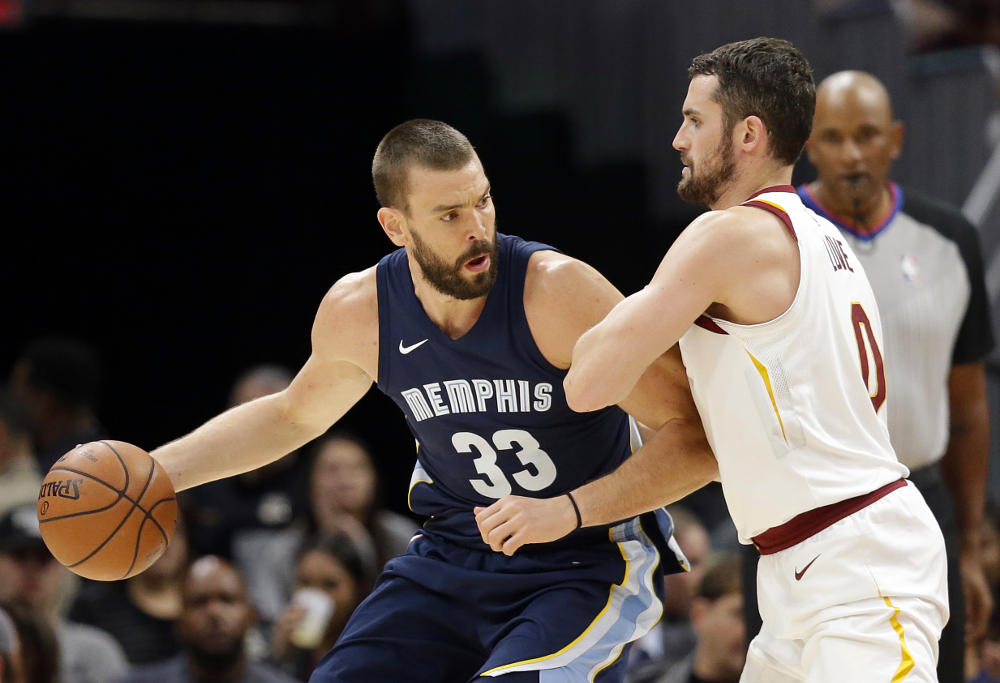 What will be remembered, though, is what Gasol and Conley once did with ‘not much’. Conley was a superstar pest – someone who played, and hopefully will again, with the desperation of a man fighting for his job, a wonderful tenacity that belied an exquisite skillset that more aptly pointed to his standing, briefly, as the highest paid player in the sport.

Zach Randolph and Tony Allen are the more iconic symbols of the Grit and Grind era, but Gasol is surely its most prized treasure. For the past four years, he has been Memphis’s best player, and always its most ethereal, with Conley acting as the bridge between Gasol’s ghostly skills and Randolph’s endearing forms of punishment.

Even still, yesterday against the Cavs, much of Gasol’s genius shone as it used to in those memorable playoff runs. There was the constant activity on offence, the pseudo-screens that turn into purposeful hot potato passes to keep the infectious team-wide movement flowing.

There was the savant-like positioning on defence, the mere appearance of his large body enough to make an easy shot an impossible one. There were the ground-bound but high-arcing flick of the wrist jump shots that touched only the bottom of the net, the astute bounce passes to cutters, and the clumsily violent but (secretly) totally controlled bulldozes to the rim – finished always with a soft touch. Each moment was a little reminder of a time when it used to matter.

But there was too much present for Gasol. He is no dinosaur – he is still a star, a borderline All-Star – but he is no longer a transformative force. The game is moving beyond his deft nuances. Where he once stood tall and proud near the rim, now he is dragged out into hopeless space where he is just another man.

There was a dirty feeling in the fourth quarter against Cleveland watching Gasol defend Jeff Green beyond the arc, some sick demonstration of modernity.

The Grizzlies briefly rediscovered some of their famous defiance against the Cavs, mostly through Tyreke Evans’ disregard for what ‘should’ happen to step-back heaves at the end of the shot clock. They tied the scores in the final minutes, but then, with the score locked, LeBron drove to the rim.

In years past, maybe basketball would have allowed Gasol to be right there to meet him. But on the verge of 2018, he was left stranded in the new ‘Kevin Love at centre’ world, forced to guard the strange arc instead of the familiar rim. Love’s gravity pulled him away from where he wanted to be and by the time he got to LeBron it was much too late, for Gasol and the Grizzlies.