Highland Reel: The best ever international raider to come to Australia?

Highland Reel’s sensational win in the Group 1 Hong Kong Vase poses a question: Was this the best international raider ever to run in Australia?

Just to make this precisely clear, it isn’t a question of being the best ever horse to run in Australia – but was he the best horse to have tried winning one of our biggest and lucrative Group 1s?

Although Highland Reel requires no real introduction to local racing fans, to remind you of his only start in Australia, the Aidan O’Brien-trained galloper contested the 2015 Cox Plate. Going back to read previews of that race is good fun – he was quite fairly rated either on-top or close to it, over the likes of Criterion, Preferment, Arod… and Winx, of course, who was just proving herself.

The race is wonderful history for the beating that Winx handed out, dominating the field to win by five-and-a-half lengths, with Aidan O’Brien’s magnificent globetrotter in second. But this isn’t about Winx, just for the moment.

Highland Reel went on to win six more Group 1s – twice at Ascot, along with wins at Epsom in the UK, Arlington Park and Santa Anita in the US, and Sha Tin in Hong Kong. He was also second in the pinnacle horse race of Europe, the Prix de l’Arc de Triomphe, in 2016, another one of his best performances in winning seven Group 1s in total.

So who stacks up against him?

Adelaide won the Cox Plate in 2014, but I can’t see any argument that shows he was a better horse than Highland Reel. His other Group 1 win was the Secretariat Stakes (2011m) at Arlington in the USA, prior to his Cox Plate triumph, and he had one more run under Chris Waller before being retired.

Rekindling won this year’s Melbourne Cup and we’ll see how well he goes on with it, but certainly looks a star in the making.

Delta Blues did win the Kikuka Sho (Japanese St Leger) in 2004 which has him high up, while Dunaden managed to win the Caulfield Cup and Hong Kong Vase, and placed at Group 1 level across Europe half a dozen times. Americain only managed the Cup as his sole Group 1 win, although did place at the highest level four times.

Protectionist could’ve been anything but was only able to capture one more Group 1 win after his Cup triumph, with Australian tracks too firm for his bone structure for regular racing. Sent back to Germany’s more consistently soft tracks, he won the Group 2 Hansa-Preis in Hamburg and his second Group 1 in Berlin, before being retired through injury. His top rating was 120.

Red Cadeaux, the fabulous globetrotter, was consistently at his best away from home. Although he didn’t win consistently – including his memorable three close seconds in the Melbourne Cup in five attempts, he did win a Hong Kong Vase, and managed feats like a third in the 2013 Japanese Tenno Sho (Spring), second in the Queen Elizabeth Stakes at Randwick, and fourth in the Irish St Leger. He earned a top rating of 120. 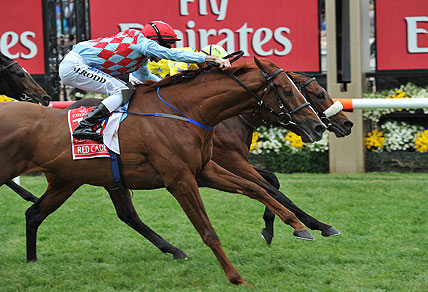 With thanks to walking talking horse encyclopedia Andrew Hawkins, Marienbad was seventh behind Ethereal in the 2001 Melbourne Cup, but went on to win three Group 1s including the Arc, and two German top-level races, earning a top rating of 118.

Grandera was third in the 2002 Cox Plate, and managed to win three Group 1s, including the Irish Champion Stakes, which is one race Highland Reel couldn’t capture, and the Prince of Wales’ Stakes, which the Reel won this year. He earned a top rating of 119.

German horse Silvano was another Cox Plate runner, missing a place in a great 2001 race won by Northerly over Sunline and Viscount. He won at Group level in North America, Hong Kong, and Singapore, including the Arlington Million in 2011, the Queen Elizabeth II Cup in Hong Kong, and the Singapore International Cup over 2,000 meters at Kranji.

Vinnie Roe famously had three goes to win the Melbourne Cup as one of the world’s best stayers, each time set as topweight, and twice falling to Makybe Diva. He managed fourth in 2002, second in 2004, and eighth in his final race in 2005. He won the Irish St Leger four times in a row, and also won a French Group 1 in the Prix-Royal Oak.

Highland Reel tops them all – including on the official ratings list. With a rating of 123 from the World’s Best Racehorse Rankings, Highland Reel just pips Yeats (122), with a host of others including Red Cadeaux, Vinnie Roe, and Protectionist on 120.

This isn’t a complete list, as most of the historical references I can find are all about Australian horses triumphing on their overseas raids, god love ’em. If you have any thoughts or insights, they’re very welcome!