The VAR has disrupted football in Australia, but it's distracting us from the main issue

I would add change is rarely easy or comfortable.

Sometimes it’s welcome, often it’s forced but on some occasions it just feels unnecessary. Judgement is more accurately passed in hindsight but experience guides us in the early stages.

Australian football is currently experiencing the holy trinity of disruption: the governing body, our men’s national team, and the professional league. The implementation of a new system attempting to improve decision-making outcomes by officials in the A-League has already proven to be unruly. It’s invasive and claws at the very fabric of our ‘beautiful game’.

I love a good collaboration but football and the VAR is more Lulu than Torville and Dean.

Early experience and instinct makes me want to chew it up and spit it out, but “you cannot kill what you did not create” (so said Corey Taylor).

The perfectionist in me doesn’t mind the principals behind a system that wants to improve decision-making and positively influence match results.

The sceptic in me was dubious before it was up and running. Other sports have struggled to develop and implement similar systems. Operating in cohesion with in-game action, while also elevating the product, has proven difficult. While there’s been a sense of inevitability about VAR, I’ve tried to stay open-minded and avoid confirmation bias but the struggle is there.

The purist in me does not want the ‘grubby hands’ of technology infiltrating the sanctity of our game’s organic nature. I was resistant to goal-line technology but happily changed my mind when it was clear its intrusion on our sport was absolutely minimal. With no human interference when in operation, it offers clarity quickly while enhancing the overall product.

VAR is a different beast and there’s only rage for this machine. 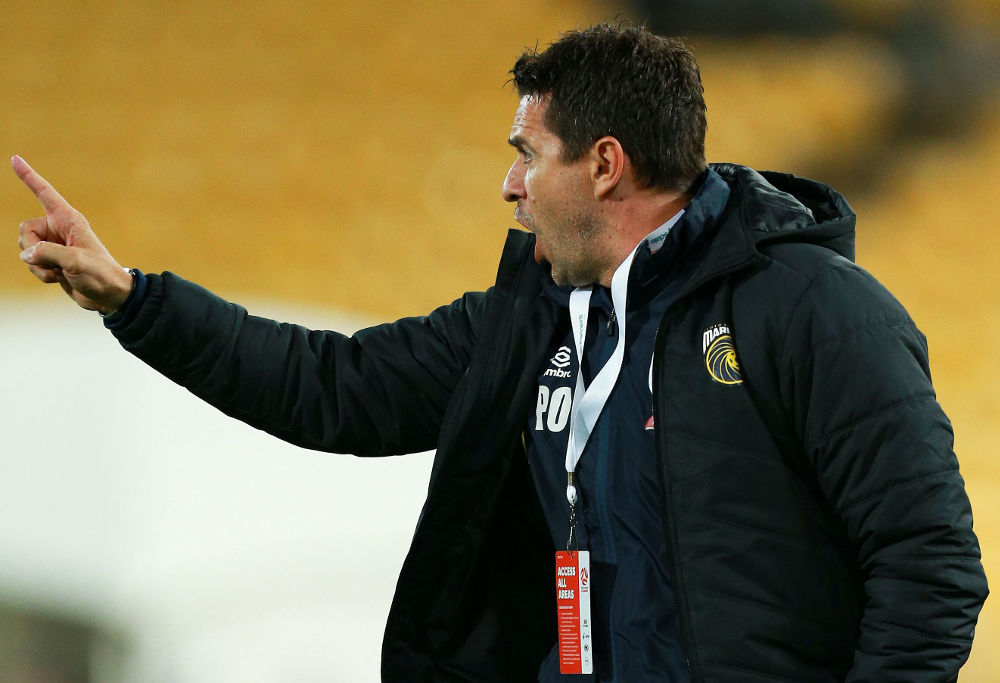 The romantic in me doesn’t want the sport I’m passionate about to implement change that may dilute that very emotion.

The cynic in me is the cynic in you. More often than not, in the worlds of business, entertainment, and professional sport there is a financial angle. Possibly, in the increasing commercialisation of sport, it’s been identified that the VAR can provide new revenue streams for the sport and the broadcasters. I love a good plot twist and this one doesn’t really bother me as long as it’s not doing irreparable damage to the sport.

Even in the VAR’s short existence, appropriate questions need to be asked.

Has it corrected some of the on-field errors by referees and linesmen? Yes.

Has it improved officiating overall? I don’t see how. If anything, referees are increasingly second-guessing themselves, or are foregoing ‘big decision’ moments because they’re covered by the Wizards of Oz football in their tiny control rooms. The authority of the referee in the middle has been considerably diminished because their errors are abruptly highlighted and they don’t have the final say anymore.

Is the VAR helping to get more decisions right than in previous seasons? It’s too hard to measure and while it appears the referees are auditing their own department, we’ll possibly never know the answer.

Is the VAR negatively impacting the football product? No doubt. Intrinsically I feel it and I know I’m not the only one. I turned off rugby league after the introduction of the video referee and those same feelings are surfacing again.

It seems almost self-evident that VAR is damaging football in this country. More human involvement increases the chance for more human error.

But I don’t want the VAR to hog too much of the spotlight. Rather, I want to narrow the focus and concentrate the mind to the distraction that it has become. A ruse, misdirection, a diversion that Copperfield would be proud of.

While the main focus this season has been on the VAR, we’re not dealing with the real issue of officialdom in Australian football. That is, the referees’ understanding, interpretation and implementation of the Laws of the Game. In an A-League context, this is not new. It’s always been there, but never more than in recent times. 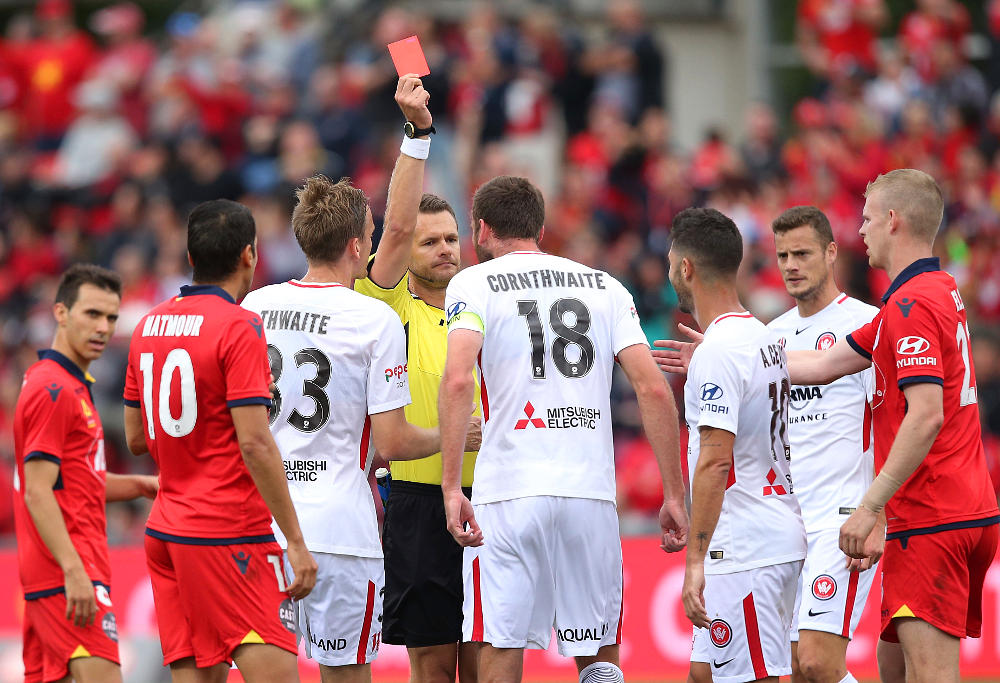 Let me take you back to my football-obsessed mid-teens when I was living in the relative seclusion of Bundaberg. Football consumed my weekends and an opportunity arose to become a junior referee. I couldn’t get enough football and jumped at the chance to earn some cash on the side refereeing junior matches and running the line for senior matches. I was in.

One particular moment sticks out from my refereeing experience. I’d passed the written exams and was refereeing an under-eights match but my interpretation and application of the offside rule was incorrect.

I was made aware of this when, after this particular match, the coach from one of the teams approached and explained the rule and how it applies during gameplay. Like Grandmaster Flash discovering the breakdown, it was a massive ‘a-ha’ moment for me. A chance for development that didn’t happen without an open mind from my end, and the guidance and clarity provided by my teacher in this instance.

Currently, what I believe to be at the heart of officiating issues in Australian football is leadership. Specifically, education and mentorship. As so often is the case in football, business, politics, and life, you can follow the path of destruction back to who is calling the shots.

Let me sidetrack you again. In my last season at Melbourne Heart, we were required to sit through a pre-season presentation from incoming referees boss Ben Wilson. In the aftermath, our entire football department was left in a state of bemusement.

As Ben took us through interpretations of fouls, handballs, penalties, yellow and red cards, and examples of when they apply in matches, we comfortably disagreed with a large portion of his rulings. It felt like an objectionably significant amount. It was clear that referees, and footballers and coaches were on a vastly different page before we even set foot on the pitch.

This is where the heart of the issue lies, and no full-time officials, extra officials on the goal-lines, or VAR is going to fix the root of the problem.

The knowledge gap between understanding to interpreting and applying the Laws of the Game is still vast, particularly interpreting physical contact in a highly charged, high-speed, professional environment.

Don’t get me wrong, it’s difficult. Players are cunning and things happen quickly. Unless you’ve experienced it yourself, understanding the subtleties and nuances of physical altercations and the intent behind them aren’t easily learnt in a textbook or by watching a video screen. 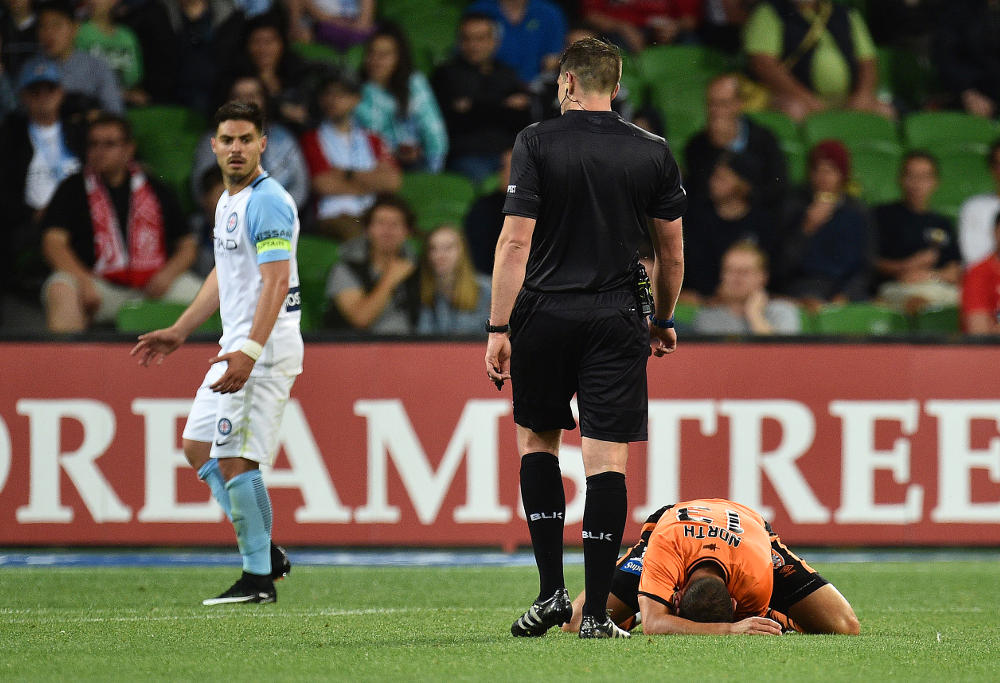 This is a referee issue but, more importantly, it’s a leadership issue. A common thread with all the big issues that currently face our game in this country. This is where change should happen and I believe would be welcomed.

At the moment, there’s a new generation of referees getting their opportunity in the A-League and the W-League but under the current guidance, I believe there is a low ceiling to what they can achieve.

I’ve noticed a lot of these young referees seem to have the required temperaments to deal with the emotional heat of a professional environment. However, I believe they’re being mismanaged, misled, misdirected and possibly battling their natural instincts to what they believe to be correct calls only to be instructed otherwise.

The example of Strebre Delovski comes to mind. During the early stages of his A-League refereeing career, a good rapport complemented with a ‘feel’ for the game saw him as a favourite among the players. However, around the time there was a leadership change from previous Director of Referees Mark Shields to the current regime, his performances seemed to dip significantly and became inconsistent.

The significant disparity in performances from one period to the next and the timing of his slide in form suggests he possibly was a victim of this change in leadership. I don’t have irrefutable evidence to back that statement up, but experience and considered thought has led me to this belief.

Clearly, solutions to the problems I’ve posed above are not easy or immediate.

For me, to start, nothing short of a worldwide scouting mission to lure a well respected, highly regarded referee instructor/director to this country would suffice. An architect who can implement a system that streamlines and simplifies formal learnings, while also encouraging an environment of open-mindedness and informal development opportunities.

As far as recruiting career referees, if the effective system and environment is the foundation, then identifying the appropriate personality types must be paramount. Effective communicators with high emotional intelligence and self-awareness would be ideal.

Also, a different avenue may be to lure those that already have substantial knowledge of the professional game, which would hold them in good stead as officials. I’m talking about ex-professionals or even semi-professional footballers.

I’d assume there would be some that could be lured into the refereeing profession once their playing days are done. It’s even crossed my mind to take up the whistle again.

This process wouldn’t happen overnight but the long-term gains that come with systematic change would be invaluable. Instead, we are distracted from the core of the issues by short-term thinking.

Apparently, we are stuck with VAR until March 2018. Then we await the verdict on this ‘trial’, this current abomination. At the moment, there is plenty of anger and frustration aimed at football in this country.

It has also become deliciously satirical. In the world of Australian football, one thing we can rely on is that the sun will rise tomorrow and the knives will be out again. The kicker is now the next David Squires cartoon. Some things don’t change.

Clint Bolton
Expert
Clint Bolton is a former Socceroos goalkeeper who earned four caps for Australia. He made over 450 appearances in the A-League and NSL, winning two championships in each competition - two with Sydney FC and one each with the Brisbane Strikers and Sydney Olympic. Having completed a Masters of Management (Sport), he currently works with SBS TV and Radio, as well as Crocmedia on their A-League coverage