As 2017 draws to close, football fans in Australia can look forward to significant change in the ensuing 12 months.

Not only will the sport in Australia be transformed with a new governance structure, but the A-League will undergo a transformation from being owned and managed by Football Federation Australia (FFA) to an independent entity that is fully owned by the clubs participating.

This independence should not be unfettered. The FFA has full control of football in Australia and must set boundaries for the operation of the A-League.

Identifying the boundaries the FFA should impose will stimulate vigorous discussion across the football community and should include salary cap, visa players, player availability for international duty, etc.

Since the formation of the A-League, a cap (and floor) has been used to control wages.

Simply, there are too many ways for creative accountants to remove income from prying eyes.

Even the world’s most advanced governments, with highly resourced forensic auditors who have wide policing powers, are unable to discover hidden money that passes each day. So it defies commonsense to pretend any sporting organisation can accurately monitor income being paid to players.

If the A-League is fully owned by the participating clubs, it seems likely they will remove the salary cap. If this occurs, FFA should impose regulations to ensure the competition will always be focused on providing a career pathway for Australian football talent.

I propose instead implementing a player points system (PPS) that will be impossible to cheat, simple to administer and promotes the professional football development of Australian youth.

A PPS is currently used to regulate the squads participating in the National Premier Leagues (NPL). The NPL PPS is impossible to cheat, however seems unnecessarily complicated. I would prefer a simpler PPS for the A-League.

My A-League PPS will have two categories: visa and age points. Each player will be assigned player points (PP) valid for the entirety of that season. 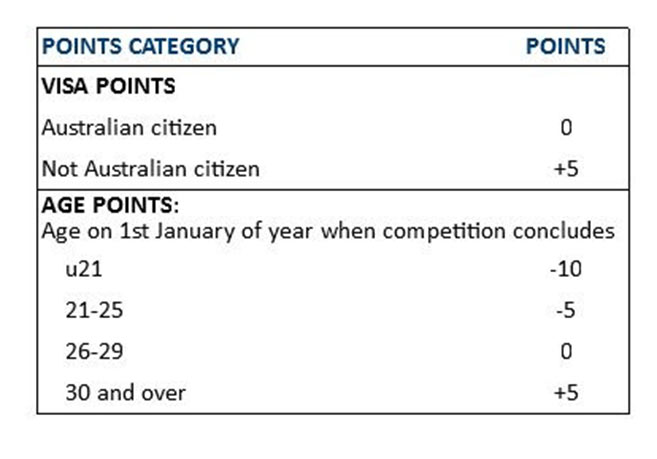 The total PP for the 11 players in a team on the park at any time during an A-League match must be less than, or equal to, zero.

(If a player is sent off, his PP will continue to apply towards the total. Hence, if a team with 11 players and total PP of zero had an Australian U21 player sent off, the total PP will be deemed to still be zero, even though the total PP for the ten players on the park will now be ten.)

For example, during the Melbourne Derby last Saturday, Victory’s starting XI would have had a PP of 15. However, by putting Christian Theoharous (PP = -10) in, instead of Kosta Barbarouses (PP = +5), the team’s PP at kick-off would then be zero, and a young Aussie player would have been given valuable match-time.

This PPS will be simple to administer, impossible to cheat, and will ensure Australian youth footballers are essential.