Revisiting the 2008 Australian Open, the Grand Slam tournament that had it all

This year marks ten years since the 2008 Australian Open, a tournament which had just about everything – a change in court surface, a match that finished at 4:30am in the morning, an apparent changing of the guard in men’s tennis and the notable performances by Serbian players.

After two decades of employing the rebound ace surface, which had previously been in effect since the tournament moved from Kooyong to Melbourne Park in 1988, a decision was made by Australian Open organisers in May 2007 to change the surface to plexicushion.

The new surface was coloured blue, making it easier for television viewers to track where the ball is travelling during a rally. It followed a similar change by the US Open, which employs DecoTurf, where the inner part of the tennis court is coloured dark blue, with the outside boundaries remaining green.

The tournament would be best remembered for the breakthrough performances of Serbian players, namely Janko Tipsarevic, Novak Djokovic, Ana Ivanovic and Jelena Jankovic, as well as two gripping five-setters which makes the Australian Open the tournament that it is. 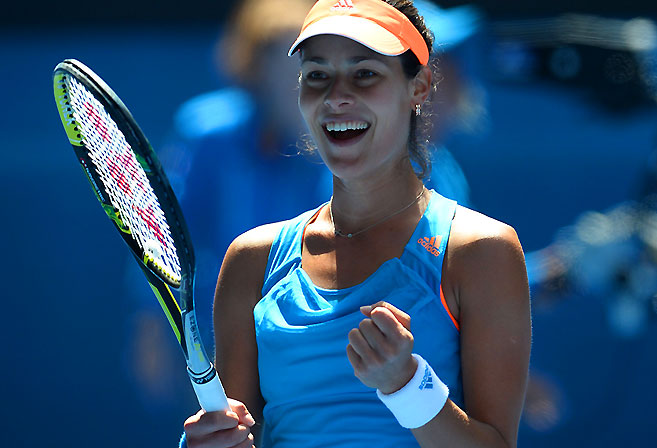 Tipsarevic, ranked 49th in the world, stunned the tennis world when he took the opening set in a tiebreak in his third round match against Roger Federer; this marked the first time since the 2006 final that the Swiss Maestro had lost the first set in a match at Melbourne Park.

After dropping the second set in a tiebreak, Tipsarevic went on to take the third 7-5 and leave Federer on the ropes, down two sets to one and facing his earliest Australian Open exit since 2001.

However, the Swiss would hit back, taking the fourth set 6-1 before embarking on what could only be described as a gripping and nail-biting fifth and final set.

Games went to serve but when the score reached 6-all, everyone was left on the edge of their seats to see if Federer – at the time still a clear-cut world number one ahead of Rafael Nadal – could pull through his toughest test yet.

Men’s world number three Novak Djokovic even delayed his post-match press conference (he defeated American Sam Querrey earlier in the day) so that he could follow the fifth-set drama.

When Tipsarevic reached 40-0 in the 17th game of the deciding set, many thought the match would keep going on and on and on. However, Federer would come from behind and finally break the 23-year-old Serb to finally put himself into the position where he could serve for the match.

Federer did exactly that, the final set score reading 10-8.

Persistent rain on the middle Saturday of the tournament meant that play was only possible on the two indoor courts (Rod Laver Arena and Vodafone Arena, as it was known as at the time), but this was nothing compared to what tournament organisers would face that evening.

The length of the Federer versus Tipsarevic match, which clocked in at just under four-and-a-half hours, meant the evening session, which was to feature a marquee match between Lleyton Hewitt and Marcos Baghdatis, would be delayed by under two hours.

Before the men, Venus Williams and Sania Mirza took to the court for their third round match, which the American won in straight sets.

Then, at last, Hewitt and Baghdatis, both former finalists at Melbourne Park, took centre stage with the first ball not struck until eight minutes to midnight Melbourne time.

By this point, nearly all of the eastern seaboard was asleep in bed. But the die-hards who remained at Melbourne Park to watch their hero would be treated to over four-and-a-half hours of pure tennis drama.

Baghdatis took the opening set 6-4, before Hewitt struck back to take the next two sets by 7-5 to take a two-sets-to-one lead.

Then, in the fourth set, Hewitt reached match point at 5-2, but Baghdatis would rally, saving it and then dominating the ensuing tiebreak to level the match at two-sets all.

From there it was anyone’s game.

His reward was a fourth round showdown against third seed Novak Djokovic, who had finished his third round match against Sam Querrey some ten or twelve hours beforehand.

Hewitt would finally run out of tank, going down to the Serb in straight sets and seeing his Australian Open dream ended for another year.

Djokovic would go on to end Roger Federer’s title defence with a straight-sets win in the semi-finals, before defeating first-time Grand Slam finalist Jo-Wilfried Tsonga in the final in four sets.

Tsonga’s improbable run to the final included the scalps of ninth seed Andy Murray in the first round, countryman Richard Gasquet in the fourth and Russian Mikhail Youzhny in the quarter-finals.

But none was more impressive than the straight-sets thrashing he dished out to world number two Rafael Nadal, who was appearing in a Grand Slam semi-final outside of Europe for the first time.

In a stunning display, Tsonga hit nearly 50 winners and did not face a break point on his serve until early in the third set, eventually winning 6-2, 6-3, 6-2 in less than two hours.

He thus became the first French male player to reach a major final since Arnaud Clement did so at the 2001 Australian Open.

The opening set he took in the final against Novak Djokovic would be the only set the Serb dropped throughout the tournament, as the third seed went on to win the first of twelve (and counting) major titles, and first of a record-equalling six (shared with Roy Emerson) at the Australian Open. 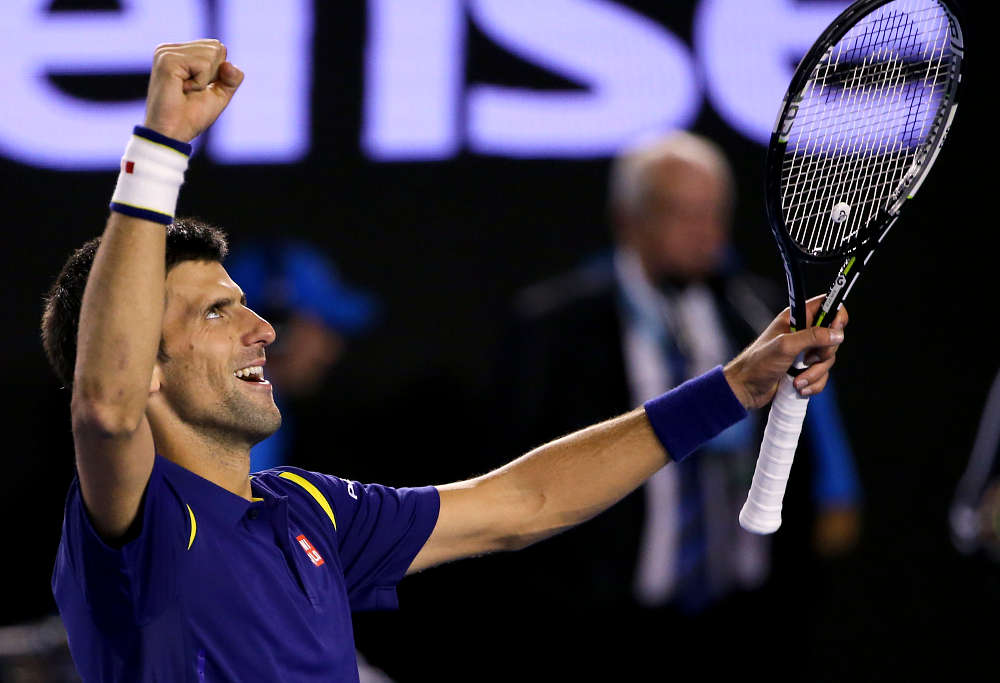 The Serb would have to wait another three years to win his second Grand Slam title, also at the Australian Open, in which he defeated Andy Murray in the final.

He has since gone on to ascend to the top of the rankings (doing so after winning Wimbledon in 2011) and become the first man since Rod Laver in 1969 to win all four major titles simultaneously, winning Wimbledon and the US Open in 2015, and the Australian and French Opens in 2016.

This year, the 30-year-old will have the chance to take sole ownership of history with a record seventh title at Melbourne Park, which if achieved would be the perfect way to mark the ten-year anniversary of his first major title.

The Serbian influence was also felt in the women’s draw, where Ana Ivanovic reached the final and Jelena Jankovic the semi-finals, with both falling victim to Maria Sharapova after defeating the Williams sisters (Venus and Serena) in their respective quarter-finals.

Ivanovic was coming off a breakthrough 2007 season in which she reached the final of the French Open and the semi-finals at Wimbledon, finishing the year with a world ranking of number four. She was named the WTA’s Most Improved Player of the Year for a second time in three years (after 2005).

The Serb, aged 20, reached her second major final after defeating the likes of Caroline Wozniacki, Venus Williams and Daniela Hantuchova en route. In the latter match, she was down 0-6, 0-2 before rallying to win in three sets.

Her popularity, and the fact she had relatives living in Australia, saw her enter the match against Sharapova as the favourite.

The match was dubbed the “Glam Slam” final as both Ivanovic and Sharapova are known for their looks not only on the court, but also off it. Chances are, it might as well have been the most photographed Grand Slam final in recent tennis history.

Ultimately, it was Sharapova who prevailed, winning in straight sets 7-5, 6-3 and thus burying the demons of the previous year’s humiliating defeat to Serena Williams.

It is somewhat fair to say that Sharapova would not have won the title had Williams not lost to Jelena Jankovic in the quarter-finals. 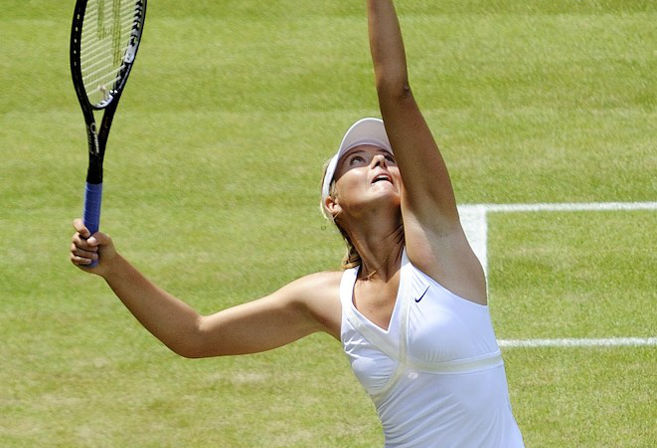 The American, who won the title the previous year while ranked 81st in the world, had won her first four matches in straight sets (including that over future rival Victoria Azarenka in the third round) and had also won her previous meeting against Jankovic at the 2007 Australian Open.

Had Williams defeated Jankovic again, she would’ve faced Sharapova in the semi-finals and would have started as the favourite to defeat the Russian once again as well as go on to retain the title.

In retrospect, that defeat would prevent her from achieving a four-peat at Melbourne Park; apart from that famous run to the title in 2007 (in which she thrashed Sharapova in the final), she would also reign in 2009 and 2010 before missing the 2011 tournament due to a serious foot injury.

Thus, in hindsight, Sharapova had Jankovic to thank for removing the biggest threat from her draw, subsequently thrashing the Serb in straight sets in the semi-finals to progress to the final.

She had, earlier in the tournament, dismissed Lindsay Davenport, Elena Dementieva, and, most impressively, world number one Justine Henin en route to her fourth straight Australian Open semi-final.

As for Ivanovic, the Serb did not have to wait long to capture her only major title, winning the French Open after the field was blown wide open by the sudden retirement of Justine Henin two weeks prior to the tournament, and the early departures of Serena Williams (who was the only former champion remaining in the field following Henin’s retirement) and Maria Sharapova.

In what was a case of friendly fire, the only set she dropped en route to the title was the second set in her semi-final match against compatriot Jelena Jankovic, which was to decide who would become the first player from their country to ascend to the world number one ranking.

Then, inspired by Novak Djokovic’s run to the Australian Open title earlier in the year, Ivanovic defeated Dinara Safina in the final in straight sets to win her first (and only) major title, ascending to the top of the rankings afterwards.

Jankovic would then reach the final of the US Open in September, losing to Serena Williams (who by winning the title would dislodge Ivanovic from the top of the rankings), before finishing the year ranked world number one.

Back on topic now, and the 2008 Australian Open was also best known for the performance of little known Australian Casey Dellacqua, who prior to the 2007 US Open had never won a Grand Slam main draw match.

The Western Australian required final sets lasting 14 games in each of her first two matches to defeat Karin Knapp and Patty Schnyder before she rose to prominence by knocking out 2006 champion Amelie Mauresmo in the third round, again coming from a set down to do so.

She took third seed Jankovic to a first set tiebreak in their fourth round clash, before the Serb’s experience told in the second set as she took it 6-1, and thus the match in straight sets.

To finish off, the 2008 Australian Open will forever go down as a tournament in which the country of Serbia made their mark, the trio of Novak Djokovic, Ana Ivanovic and Jelena Jankovic combining to take down Roger Federer and the Williams sisters, respectively.

It will also be remembered for the memorable run to the final of Jo-Wilfried Tsonga, who has not been able to reach another major final since but has carved out a solid career, winning a couple of Masters titles and becoming one of three men – the others being Stan Wawrinka and Tomas Berdych – to beat each of tennis’ so-called “Big Four” at a major tournament.

And who could forget those gripping five-setters between Roger Federer and Janko Tipsarevic, and the famous late-night (or should it be early morning?) marathon between Lleyton Hewitt and Marcos Baghdatis?

What is your best memory from the 2008 Australian Open? Please leave your thoughts below.