A month ago, Perth Glory secured victory over Wellington Phoenix, then travelled to Brisbane five days later and won 2-1, putting them in the A-League top six.

This past weekend, Kosta Barbarouses scored in stoppage time to consign Kenny Lowe’s side to their fourth consecutive defeat, a result that has intensified the discussion about the team’s direction.

This has been previously discussed, yet many of the issues that have been raised over Lowe’s four-year tenure remain unanswered. The biggest question, and probably the key consideration when assessing coaches, is whether they improve their teams. Does Lowe?

Broadly speaking, Perth’s strengths are their counter attacking and the quality of individual players in the front third, but it’s arguable these are related; counter attacking teams have the ball less often than possession teams, but the attacking moments are generally more productive because you attack into more space and against overloaded defences. As a result, better players tend to stand out when they have more space to attack in.

It is possible to argue that Perth aren’t that good at counter-attacking, but if you accept that they are, is it because of Lowe’s coaching or because of the type of players they have?

Perth don’t score many, and they concede a lot, too – the most in the competition this season. This is down to the lack of a settled back four, the lack of protection from central midfielders (particularly when Mitch Nichols is used in a deeper role), and a general lack of defensive compactness from front to back.

Lowe tends to use a 4-4-2, and when he does, the front two don’t work particularly hard to stay connected with the midfield four. Therefore, when opponents play past the first line of pressure, the central midfielders are drawn forward to apply pressure on the ball, leaving gaps in front of the back four that are exposed by clever attackers.

Even when Perth do defend compactly, gaps still appear. In the 6-0 mauling at the hands of Sydney FC in the New Year, for example, the wide players were asked to track Sydney’s full-backs, even into deep positions, to prevent them from receiving the ball in time and space in wide areas.

The problem was, both Luke Wilkshire and Michael Zullo simply pushed up as far as they could go, so that Diego Castro and Chris Harold ended up almost as part of Perth’s back four, creating a back six. This then caused problems for the central midfield pair, who suddenly had gaps on either side of them that could be exploited by Milos Ninkovic and Adrian Mierzejewski.

The same pattern proved problematic in the same fixture earlier this season, when VAR controversy overshadowed a fairly straightforward 2-0 win for Sydney. Again, Lowe asked his wingers to track the full-backs, and again, space opened up in the pockets either side of the midfield duo.

Incredibly though, in spite of these problems when defending, Perth had even bigger problems in attack.

In the 6-0 thrashing, Sydney’s opening goal came from a three-pass move on the counter, where Mierzejewski was able to break beyond the central midfielders and carry the ball into the vacant 40 metres of space between Perth’s midfield and defence. Similarly, against Adelaide United, the opening goal came from a turnover wherein Adelaide’s front three could directly attack against Perth’s exposed centre-backs.

Perth have their moments, but they always feel as a consequence of the quality of individual players rather than a collective gameplan. Diego Castro is brilliant in one-on-ones and can create something out of nothing, Jacob Italiano has been a revelation for similar reasons, and Andy Keogh is one of the league’s better strikers. 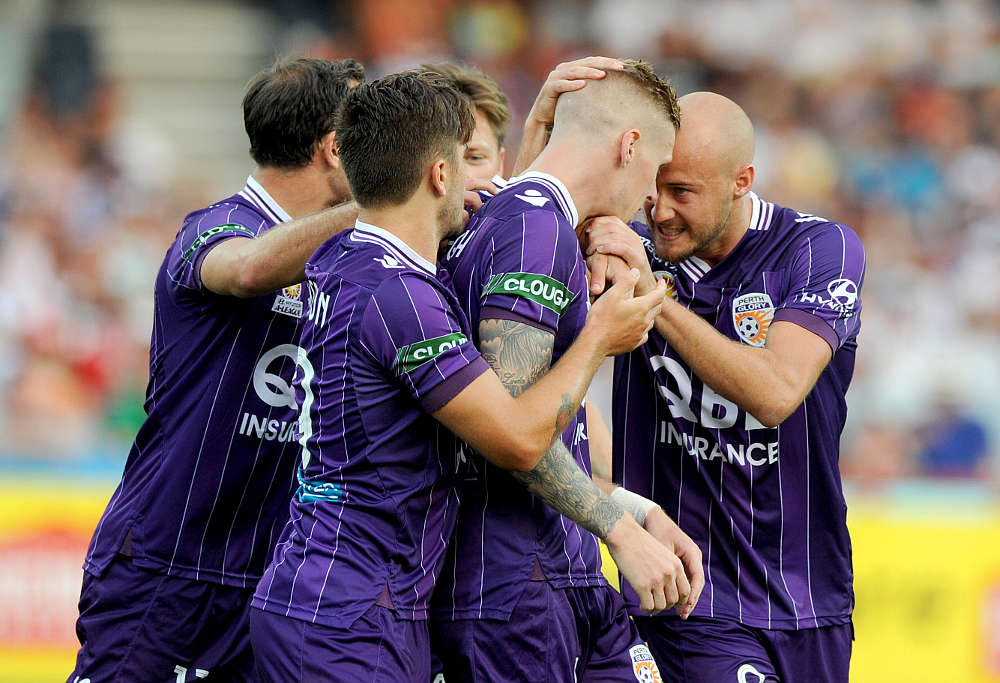 Beyond that though, Lowe has not moulded the squad into a harmonious attacking unit. There is a lot of pace and hard running from the likes of Chris Harold, Joel Chianese and Mitch Nichols, but little evidence of combination plays or cohesive attacking patterns to break down opponents.

If the coach’s job is to improve his team, then it is hard to see how Lowe has genuinely progressed over the last four years.

From a tactical perspective, Perth epitomise the league’s current malaise, but more concerningly, they simply are not very good. It feels like there is no big picture to their game plan – how do they want to play? – and no small details within it – where do the midfielders stand to stop counterattacks?

Altogether, it points to a lack of direction.