Young Windies have pushed the laws to their absolute lowest

For whatever it’s worth, I find ‘Spirit of Cricket’ arguments to be mostly spurious. There is, as you’d probably know, no such thing as a hard-and-fast, properly codified, clearly defined Spirit of Cricket.

The Laws of Cricket certainly are clearly defined. They’re quickly and easily referenced because they actually exist. You can buy a printed, hard copy version of the Laws from the Lord’s online shop for £3.50.

You can’t buy a copy of the Spirit of Cricket, though. Mainly because it only exists in our mind, and it’s only referenced for use in subjective arguments, usually (and most recently) about obscure dismissals.

There is, of course, a Preamble to the Laws entitled ‘Spirit of Cricket’. It comprises 162 words of single line platitudes like ‘Play hard and play fair’ and ‘Respect the umpires decision’.

It has nothing on common Spirit of Cricket topics such as when captains should and shouldn’t withdraw appeals, nothing on mankadding, and nothing on sneaking extra runs after a throw deflects in another direction off one of the batspeoples. Nothing on sledging, either, for the record.

Regardless, the Spirit of Cricket is in the news again – for the second time in the last week – because of a really ordinary event that took place at the Under-19 World Cup in New Zealand on Wednesday.

Batting in the in the 17th over against the West Indies at Mount Maunganui, South African opener Jiveshan Pillay was given out Obstructing the Field. Pillay had been going at a pretty decent clip; 47 off 51 balls faced to that point, and with five fours and two sixes. The other three South African batsmen and sundries had only made 30 between them at the other end, and the Windies were obviously wanting to get Pillay out before he really got away.

Pillay bottom-edged the fourth ball of the over onto his back pad from well outside off stump, and quickly turned around, shaping to knock the ball away from his stumps if required. And to legally knock the ball away, I might add, adding a small irony to what was about to follow.

The ball came to its natural rest a few inches away from his off stump. Pillay, playing what surely all cricketers would agree was well within the Spirit of Cricket, casually bent down, picked the ball up, and tossed to the West Indian wicketkeeper and captain, Emmanuel Stewart.

Pillay was probably thinking he was doing the Windies skipper a favour. No problems mate, save yourself, I’ll get this one for you. Spirit of Cricket and everything. 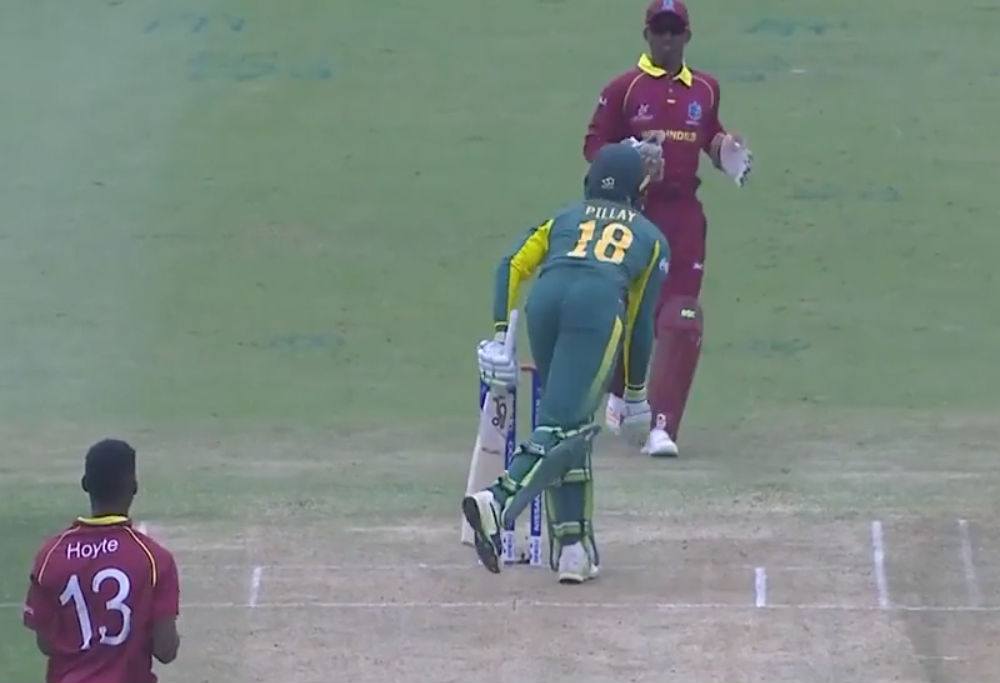 I know I did this a few times in my playing days. South African Test Captain Faf du Plessis tweeted after the event that he’s “done this almost 100 times”. Most batsmen, at some point in their cricketing life have done it, and probably even did it knowing that technically, yes, they could be given out.

But you know, Spirit of Cricket, right?

Stewart caught the ball as he walked toward the stumps, and promptly appealed to the square leg umpire.

The umpires did what they had to do and conferred, before sending the decision up to the third umpire. It’s unclear on the few replays I’ve seen of the event whether the umpires asked Stewart is he wanted to continue with the appeal or withdraw it, and in complete fairness, they’re not obliged to do that if they didn’t.

The third umpire looked at numerous replays, and finally returned the correct decision according to the Laws.

Pillay was out. Obstructing the Field.

Social media, unsurprisingly, blew up immediately. I strongly suspect Twitter’s never seen such traffic during an Under-19s game. Everyone had their say, because everyone’s now well across Law 37.

Thanks to Alex Ross’ dismissal in the BBL game in Brisbane last Wednesday, we all now know that Law 37 states:

37.1.1 Either batsman is out Obstructing the field if … while the ball is in play, he/she wilfully attempts to obstruct or distract the fielding side by word or action.

And specifically, the new playing condition that essentially says a batsman running between the wickets can’t deliberately change his line to protect the stumps, like we were all taught to do as kids, back when the Laws didn’t explicitly say we couldn’t.

The Handling the Ball Law as been clarified to remove possible overlaps of Laws, too, specifically ending “…when the striker has “finished playing the ball” – before that point in time Handled the ball applies, and afterwards Obstructing the field takes over.”

In Pillay’s case, Law 37.4 ‘Returning the ball to a fielder’ is what brought him undone:

Either batsman is out Obstructing the field if, at any time while the ball is in play and, without the consent of a fielder, he/she uses the bat or any part of his/her person to return the ball to any fielder.

But in Pillay’s case, the umpires made the only decision they could. The ball wasn’t dead, because it had neither come to rest in the bowler or ‘keepers hands, nor did the West Indies – given they appealed – ‘consider the ball no longer to be in play’ as the Dead Ball Law requires.

So this is where the Spirit of Cricket arguments take over, and in this incredibly specific case, where they have merit.

At the very least, this incident has identified a small disconnect between the Dead Ball Law and the Obstructing the Field Law that needs to be addressed. For another thing, as a Twitter follower rightly raised, what is Law 37.4 ‘Returning the ball to a fielder’ trying to prevent?

The ball had come to a natural rest. The batsmen weren’t looking for a run, and Pillay was in his ground. No fielder was trying to effect a run out.

Again, by the absolute letters of the Law, the dismissal is technically correct.

But let’s be honest here. If you’re appealing for a wicket by no other method than technicality, then are you still playing cricket, really?