What price for Nic White at the 2019 World Cup?

It’s a compelling mystery. Why are some clubs stronger than others in practice, even when their array of talent does not appear to be as formidable on paper?

Why, for example, are the Highlanders more successful than the Blues in New Zealand, and why have the Brumbies been the most consistent Super Rugby performer in Australia since 1996?

It is the sense of identity and culture within a club which answers that question. It determines what players are willing to put it all on the line, body and soul in the clutch, and win the vital small moments in a game – when the outcomes really matter. Character and culture are more important than talent.

If the Southern Hemisphere is truly unable to staunch the bleeding and prevent the transfer of its playing assets en masse to rich clubs in the North, the next best solution is to ensure that those players end up at destinations where their abilities will be enhanced rather than diminished.

There is the long-term hope that, under the right conditions, they will return to their home country with more to offer than when they left it.

With the advent of a global season – which cannot come soon enough – the possibility may open up of a more structured foreign exchange between clubs in the two hemispheres, so that the development of younger players, in particular, can be accelerated through learning in very different environments.

I have previously examined the positive impact of the Saracens culture on the play of Will Skelton. If anything, the culture and sense of identity at the Exeter Chiefs is even stronger and potentially more durable than that at Allianz Park – which is why the Chiefs are currently nosing ahead of Saracens as the leading team in the English Premiership. 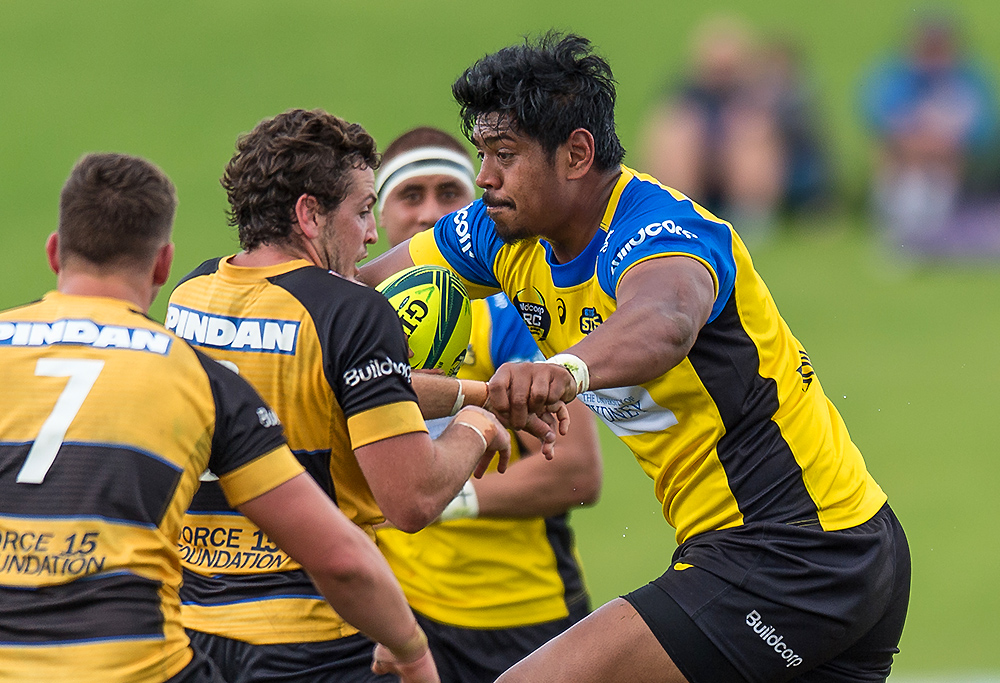 Exeter is very much a home-grown club which thrives on the mystery of cultural bonding. It places values ahead of money in the sporting food chain and enjoys very strong ties to the community via its academy and youth programs, and its extroverted involvement in a catchment area based around Devon and Cornwall in the West Country of England.

It is a club which does not waste time navel-gazing, but understands and appreciates its place in the community as a whole.

Apart from British and Irish Lions winger Jack Nowell, the Chiefs are not a team of big names and they do not chase high-value signings from the Southern Hemisphere. Instead, they target overseas players just below the very top level who fit their values and are in it for the long haul. They have been able to generate success on the field, and enjoy the only positive financial balance sheet in the Premiership. The Exeter approach clearly works, even if it is in a minority of one.

When time comes for contract renewal, most of the overseas signings who play for Exeter want to stay. All of their significant imports are Australian – prop Greg Holmes, second-rowers Mitch Lees and Ollie Atkins, back-rowers Julian Salvi and Dave Dennis, halfback Nic White and back three Lachie Turner. Lees was part of the England Saxons’ tour of South Africa in 2016, while Atkins has played a match for Scotland ‘A’.

Holmes, White, Turner and Dennis are established Wallaby internationals with 82 caps between them.

“You look at Greg and how hard he works with the other props and how he works with our young players, here is a guy you can see is desperate to pass on all his knowledge while still playing at a very high level, said Baxter.

“He’s the guy who has probably been the most unfortunate in terms of game time because he’s played very well for us, but he’s ended up at a club where we have three other international tightheads all in the squad.

“That said, he’s still a very important member of the squad and gives us great strength in that front row.”

Holmes may only be ranked third on the Chiefs’ depth chart at tighthead prop, but he has joined the culture by effectively working as a scrum coach on the training and playing fields.

Holmes is building himself into an IP asset of considerable value, and a scrum doctor who should be targeted for a return to Australia when his days in Devon are up.

Number nine Nic White is a player who should register on Michael Cheika’s selection radar much more urgently, even if he ‘only’ has 22 caps and is therefore ineligible under current Wallaby selection rules. 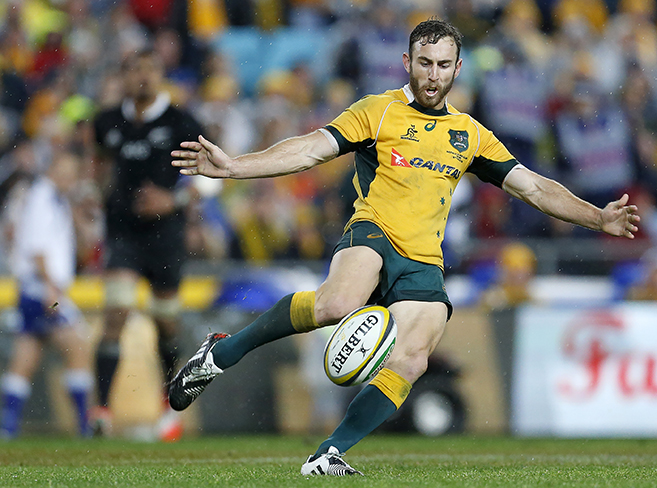 White is another Australian who has taken to the Chiefs’ culture like a duck to water, after an uncomfortable stint at star-studded Montpellier:

“Exeter has that big country town feel about it. I can see why Aussies get attracted here – very similar type of people, laidback and friendly. The guys down here invest a lot of time into each other which is very easy to slide into,” White said.

“[They play] the type of footy that suits me, keeping the ball in play as much as possible, so I’m enjoying it… It didn’t really work out [at Montpellier]. You go back to the drawing board and think about what is important, which for myself is playing good rugby and being part of a good club.

“A fair few players would want to come here to play the way we do. Not everybody, but certainly for guys who want to run a lot, this is the right place.”

When I first analysed his play for England a few years ago, I felt that White (at least at Test level) was a player the opposition would want to play against. He tended to take too much responsibility on himself – especially in the kicking game – and significantly narrow the variety of the attack.

That has all changed at Exeter. White now has far more strings to his bow and more balance to his game, and that improvement ought to interest the Australian selectors.

Recently I had the opportunity to investigate White’s game against his old club Montpellier [sic] in the European Champions Cup – and the results were mighty impressive.

These two examples come from the same sequence of play. Throughout the game, White’s passing was crisp and delivered in a consistent plane out in front of the receiver, direct from the base. He has eradicated the negative habit of taking steps laterally without presenting a threat to the inside defence, and that in turn creates more time and space for his first receiver and the men outside.

White also has no problem covering the ground to the far side of the field in order to be present at the base of the first breakdown.

One delivery direct from lineout hit the sweet spot from more than 20 metres away, creating space wide two passes later:

Kicking
White’s expertise in the kicking game came as no surprise, and it was a central plank in Exeter’s plan to exploit the space in behind Nemani Nadolo and force a kicking duel on favourable terms. The following example ended with a Chiefs lineout throw inside the Montpellier half:

Running the arc
White also demonstrated a much finer intuition about when to mix in the run from the base than in previous years, and his ability to break against the first two defenders out to his left was crucial to Exeter’s success:

Although the first offload doesn’t go to hand in this instance, the ‘nine scoot left’ remained a fruitful option for the Chiefs all game:

On this occasion, Henry Slade got sufficiently close to the Montpellier goal-line for the Chiefs to force a score out of the position on the next sequence of play.

It’s not just the initial break and reverse pass by White that’s so impressive, it’s his determination to follow up the break and become the first cleanout player over the top of the England centre when he goes to ground. He not only secures the ball, he drills into his opposite number with force.

This is where the cultural background kicks in at a molecular level, if you like. White makes that extra effort to get to the ball and get down and dirty in the trenches. The desire and heart are there, as it has been all season at his new club.

White was also quite prepared to perform this operation against breakdown monsters as big as Bismarck du Plessis: 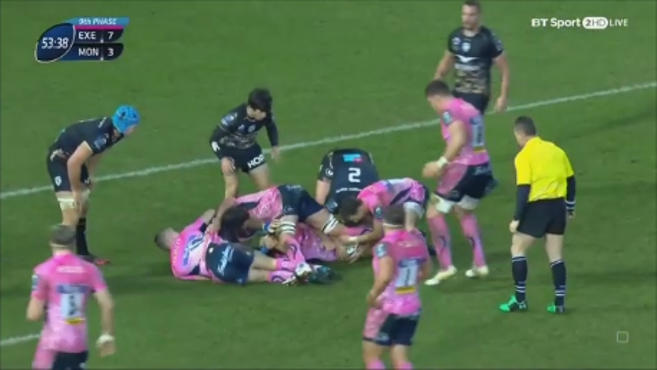 He was willing to do all the unglamorous tasks, like going down on a loose tapped ball from a lineout with the hoof-beats of the giant Montpellier forwards thundering in his ears:

I can think of several scrum-halves of recent vintage who would have refused to drop on that kind of ‘rubbish’, and left to it their forwards to clean up! It was only right that Nic White’s dedication to the cause was rewarded with a try of his own (suitably from a ‘nine scoot left’) just before he was substituted out of the game in the 70th minute:

Summary
It is not all gloom and doom in the passage of professional players from the Southern Hemisphere to the North to ply their trade.

If they can find a place in the right team culture, there is no reason they cannot continue to develop as players and thus become even more valuable to their country of origin when they return.

Exeter Chiefs are a hotbed of development for both young English talent and players from overseas. They are already developing Greg Holmes as a coach, and it is important that he brings that IP back to Australia in the near future.

Nic White will still only be 29 years old when the 2019 World Cup spins around, and at present, given the lack of development time afforded to Joe Powell (and Jake Gordon) over the last season, he would make much the best back-up to Will Genia.

He passes well off either hand and has learnt economy of movement around the base. The pass/run/kick balance is much better than it was and he can now fit more harmoniously into a possession-minded team like the Wallabies, who run their attacking plays mostly off ten or twelve.

White has changed his style to suit his circumstances in the English Premiership and it has made him both a more adaptable player and more of a threat to the opposition. Whatever political tweaks need to be made in order to make him eligible for Wallaby selection, they should be made.

What of the future? If the aim of a global season can be achieved, large-scale exchange schemes between clubs in both hemispheres may begin to flourish, developing players and coaches more rapidly and creating new interest for supporters without the permanent loss of players to the opposite side of the world.