Five quick takes from AFLW Round 1

Footy’s back – and I’m wondering how on earth I lived a whole four months without it. And you know with footy comes quick takes, so here’s five from the first round of AFLW 2018.

Brisbane lead the race early
Although they had the worst accuracy of any team in front of goal in the opening round, the Brisbane Lions finish the week looking like the top contender off a very, very small sample size.

Melbourne – who entered the season as the flag favourites according to many – enjoyed a win, but were really quite lucky not to cop a draw or even a loss at the hands of what looks like a much improved GWS side.

It was only a goal from Richelle Cranston in the final minutes of the game that put them ahead and given that they were at home against last year’s wooden spooners, a greater margin really would’ve been expected.

Brisbane, on the other hand, took a road trip and defeated the reigning premiers which is always a good way to start the year, and most impressively they did it in dominant fashion.

A 12-point margin doesn’t tell the full story about a match where the Crows were held goalless in three out of four quarters, and managed only four scoring shots in total to Brisbane’s 11.

The Lions impressed in a number of ways. Their defense was rock solid for the vast majority of the game and they were comfortably on top in the middle of the ground for all but a few spare patches.

In particular though their ability to dominate the aerial element of the game caught the eye. 54 marks was the most of any team in Round 1, ten of them coming from Sabrina Frederick-Traub alone.

Where the Lions didn’t get a tick however was kicking for goal, and Frederick-Traub gets a mention here too, kicking 0.3 off some gettable chances (though she did set up two other goals).

A fit Bella Ayre might help the Lions a bit here though and there’s no doubt the way they’re playing creates plenty of chances – convert them, and they’ll be hard to stop.

Probably their biggest worry – that the loss of Tayla Harris would hurt them badly – seems to have been averted. They still have a contested marking beast in Frederick-Traub, and a handful of players who can kick goals, like Kate McCarthy, Jess Wuetschner and Kaitlyn Ashmore.

Adelaide will hope that Erin Phillips is right to return next week and that can be the catalyst for getting their season on track. In the meantime, the Lions look to be the league’s apex predator – although… 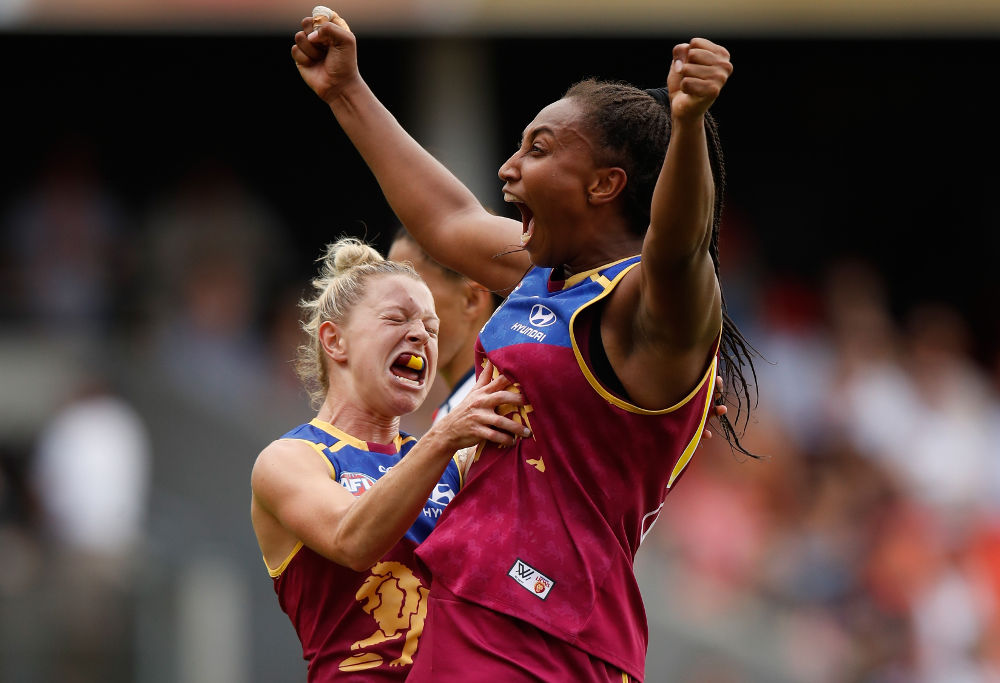 The Bulldogs aren’t far behind
If Brisbane look like the top team in it off one round, it’s probably only because the Western Bulldogs’ first-half demolition of the Fremantle Dockers wasn’t as much of a scalp as beating the reigning premiers.

With the form they were in though, the Bulldogs – led by a masterful three-goal performance from Katie Brennan – might well have bettered any other team in the competition on Sunday.

The Dogs were something of a disappointment last year, managing to start 2017 off with a win but only recording one more victory before the end of the season, and falling well short of any chance at making the grand final.

Some injuries to key players didn’t help, and while this season has started in almost the exact same fashion as last year did – a thumping win over Fremantle at home – maybe the path it takes from here will be different.

If so, the Bulldogs look every bit a contender. 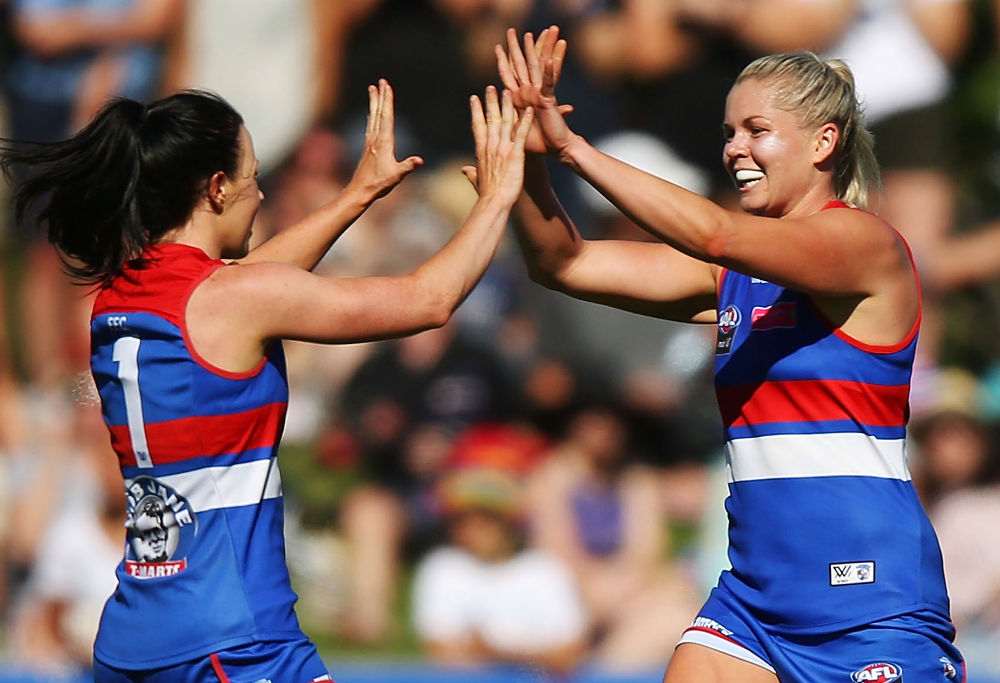 Where Pearce is the kind of clean-cut elite talent that commands respect, Hope has an eye-catching style and personality all of her own, boasting all the tattoos and talent needed to become a Collingwood legend.

So far it just hasn’t really happened for her though. Four goals in the last two rounds saved her 2017 season from being a total bust, but being held scoreless in the season opener for the second time on Friday night would’ve been a bitter pill to swallow.

The Pies said they would play her through the midfield a bit more this year but it didn’t happen to any great effect – she finished the night with six touches, one tackle, and little in the way of a real impact on the game.

That’s a shame because Collingwood more than probably any team in the league really needs someone to stand up and be a star goalkicker, and no doubt thought they had exactly that when they signed Hope for 2017.

The Pies managed only a little over seven points per hundred disposals on the weekend, every other team managing at least 11, the Bulldogs topping the table with more than 24. They were the only team in the league not to score at least one point per clearance.

Perhaps a fix would be to try moving Chloe Molloy forward. She debuted as a backman on Friday and was probably best on ground in a losing cause, but has been a proven goalkicker in the VFLW and TAC Cup.

Molloy could become Collingwood’s centrepiece forward and maybe with the opportunity to play as second banana and have less attention on her, Hope could flourish.

If not, and she has another disappointing season in 2018, it’ll be interesting to see how Collingwood picture her long term role at the side, and whether perhaps one of the four new Victorian clubs joining the league in the next two years offer her a change of scenery. 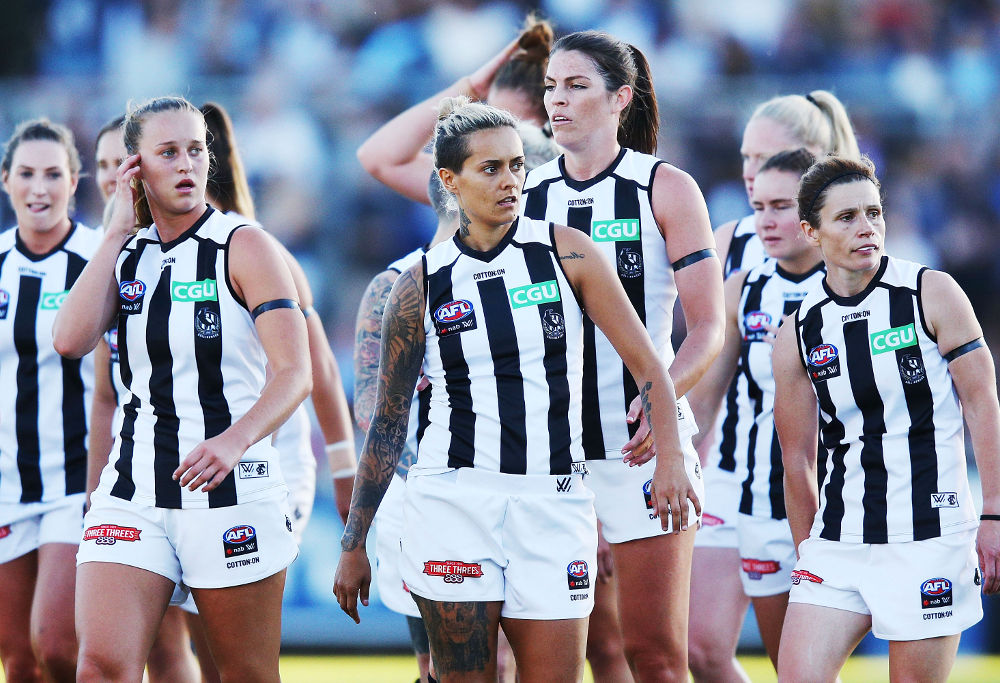 Tayla time at Carlton, but will the forwards get enough service?
Carlton fans had good reason to be excited about Tayla Harris making her debut for the club on Friday night, and she didn’t disappoint.

Harris showcased her great contested marking ability and kicked the Blues’ second goal of the night, with the only real knock on her performance being that the inaccuracy in front of the sticks that troubled her at Brisbane still seems to be a problem.

It’s not the end of the world though – it’s something you’d expect will improve over the course of her career. Even Levi Casboult kicks relatively straight now.

Between Harris and last year’s leading goalkicker Darcy Vescio it’d be hard to argue that Carlton don’t have the most superstar forward talent in the league, and Alison Downie impressed on Friday night as well.

However it’d be fair to ask the question as to whether or not the Blues have really come out ahead in their off-season moves, as the departures of Nat Exon and Bianca Jakobsson have left their midfield cupboard a little bare.

The Blues conceded just about every key stat against Collingwood, particular disposals (-46) and clearances (-6), with their saving grace being their ability to put on pressure, and their confidence to play direct footy (which having some good targets no doubt helps).

Still, they could count themselves a little lucky to have played a team with such forwardline struggles. Against a better side, it might not be enough. 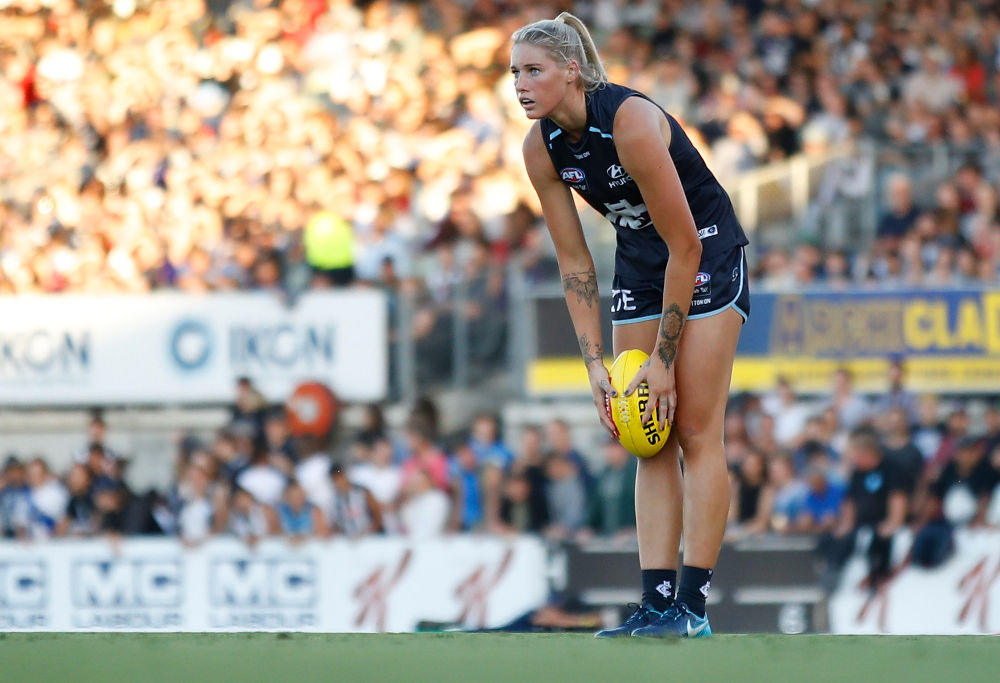 Early look at the last touch rule promising… so far
We saw the last touch out of bounds free kick rule come into effect in the AFLW this week and if anything it was probably less noticeable than I expected it to be.

That said, it seems to show some real promise so far. This year’s matches already seem to be less stoppage heavy, more fast-paced, and while increased fitness is probably the main factor in that, the last-touch rule has an impact too.

The more I think about the concept, the more I’m a fan, and the fact that it has come in relatively seamlessly here and without seeming to interrupt the flow of the game too much – if at all – is to me very promising.

That said, we’re only one round in so far and that’s not nearly enough data to make a big call on whether or not the rule has a future in the game. For now though at least, I’m very much keen to be keeping an eye on it.