With the Winter Olympics set to begin on February 9 in South Korea, fans are scrambling for the form guide to fuel three weeks of armchair expertise.

As Australians, it’s still a strange feeling going into a Winter Olympics with genuine medal chances. Gone are the days of Steven Bradbury miracles – in 2018 we boast some genuine superstars who are a chance for the podium in PyeongChang.

Here are eight of our best medal hopes.

Alex Pullin (Snowboard Cross) – World ranking: 1
The Olympics haven’t been a happy hunting ground for the man they call Chumpy. Pullin had the fastest qualifying time in 2010, only to be eliminated in the first round. In 2014, he got knocked out in the quarter-finals despite being one of the competition favourites.

Pullin arrives in PyeongChang as world no.1, having taken out the first World Cup of the 2017-18 season in Argentina. At the risk of jinxing him, Pullin is ready to deliver. Get ready to hear the name Chumpy bellowed by commentators a fair bit in the coming weeks.

Lydia Lassila (Aerials) – World ranking: 5
The Lydia Lassila story is already a rich narrative. She took home gold in Vancouver after a series of horrific knee injuries. Then she backed it up with bronze in Sochi after taking time off to become a mother.

She’s since had a second son, and in 2017 won her first event back, having not competed in three years. 2018 will be her fifth Games, the first Australian woman to reach that mark. At 36, the veteran has nothing to prove, but she’s going out there to take flight one last time. And that’s why we love her. 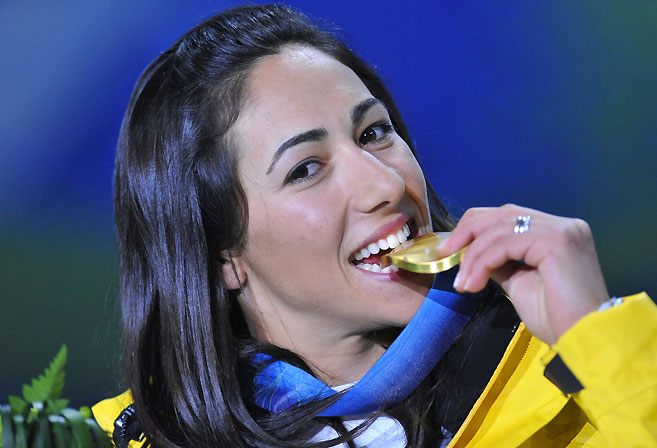 Matt Graham (Moguls Skiing) – World ranking: 3
Motivation is unlikely to be a problem for Matt Graham. In Sochi, he finished seventh in the moguls, missing out on the super final by 0.01 of a second. The 23-year-old from the Central Coast of NSW will be desperate to make an impact in PyeongChang.

He takes over from his reclusive mentor Dale Begg-Smith as Australia’s big hope in the men’s moguls. Currently ranked third overall, Graham has every chance of sneaking onto the podium this time around.

Britt Cox (Moguls Skiing) – World ranking: 4
Cox made headlines on her Olympic debut as the youngest competitor at Vancouver in 2010. Four years later, she made the moguls final, finishing a creditable fifth in Sochi. Now 22, she’s primed for successful tilt in Korea.

Last year, Cox became Australia’s first ever moguls world champion in Sierra Nevada, Spain. She was also the 2017 joint winner of Australian Snowsports Athlete of the Year alongside Scotty James.

She’s started the 2017-18 season in fine fettle, winning the opening World Cup event in Finland. Britt’s on the verge of something special – get around her.

Belle Brockhoff (Snowboard Cross) – World ranking: n/a
Brockhoff’s ranking is down due to a knee injury she suffered during training in December. Incredibly, her athlete bio claims she will contest the PyeongChang games ‘without an ACL’. Who needs important ligaments when you’ve got that much grit?

The knee seems to be in decent shape, however, after Brockhoff finished third at the World Cup event in Germany this past weekend. She also finished third in the 2017 season rankings and will be looking to avenge her eighth-place finish in Sochi when she crashed out in the semis.

Scotty James (Snowboard Halfpipe) – World ranking: 11
James is on a high after winning the 2017 Winter X Games in Aspen, thanks in part to Shaun White’s failure to complete a clean run. Though his ranking is just outside the top ten, James’ recent results have been promising. In January, he posted a score of 98.00 to claim silver at the X Games, behind Japan’s Ayumu Hirano.

James’ trump card is the switch backside 1260. He was the first person to land the trick in competition and will no doubt need it as a point of difference over the likes of White and Hirano in order to grab a medal.

Deanna Lockett (Short Track Speed Skating) – World ranking: 6
The 22-year-old Brisbane product is peaking at the right time. In October 2017, she won her first ever World Cup medal, placing third in the 1500m event in Budapest. 1500m is her preferred distance, though she also competes in the 1000m and 500m disciplines.

Competition is crowded at the top of women’s speed skating at the moment, with Canada and Korea boasting multiple contenders. However, as we know from the aforementioned Bradbury, short track skating can be a complete lottery. If she can stay on her feet, Lockett’s half a chance.

David Morris (Aerials) – World ranking: 18
Morris made history in 2014 when he became the first Australian man to win an Olympic medal in the aerials. He followed up silver in Sochi with a year off before deciding to have another crack in Korea.

Recent results have been mixed for Morris. He claimed bronze in the 2017 World Championships in Sierra Nevada, but his best results this season amount to 9th and 11th. Still, we know he can do it on the big stage when the pressure’s on. At 33, this is likely to be his third and final Olympic appearance. Carn Dave!

Which Aussie heroes will you be cheering on in PyeongChang?