AFLW is its own game that needs to evolve naturally

When asked at a press conference for his opinion on the first handful of games in the second professional season of AFLW, Gillon McLachlan failed to give fans his full support.

Waht followed was the completely unnecessary leak of a brutal, internal memo directed to the eight AFLW coaches, informing them of structural changes that had to be made to improve the spectacle.

It wasn’t a friendly request or helpful advice. It was a demand with sinister, pernicious undertones. It effectively said, “Do this, or else.”

It was embarrassing for the AFL and head of football operations, Steve Hocking. Most importantly, it was an unmerited source of shame for the AFLW, which is in the middle of a battle to win over the football-loving public. A battle that hangs in the balance.

For all of the bumper crowds across the weekend and promising television numbers, many punters remain sceptical at best, and downright derisive at worst.

Much of that is coloured by a problem of the AFL’s own making, in selecting the most popular but perhaps the least talented and least deserving teams to contest the flagship season opener.

Critically, the analysis of scores, skill and spectacle in the women’s game is premised on a comparison to the men’s. This is misguided and fundamentally unfair.

Scoring
AFLW quarters run for 15 minutes, with only the last two minutes of each quarter being subject to time-on. By comparison, in the men’s game, quarters are 20 minutes with full time-on for the duration.

That’s close to double the match time in AFLW.

Natural extrapolation applied to the scores from the Melbourne-Greater Western Sydney game, for example, to make up for the time differential would give us a final scoreline of Melbourne: 14. 6 (90) to GWS: 12. 6 (78). That’s perfectly acceptable in the AFL home-and-away season.

Admittedly, this doesn’t apply to all games, which leads to the second point. 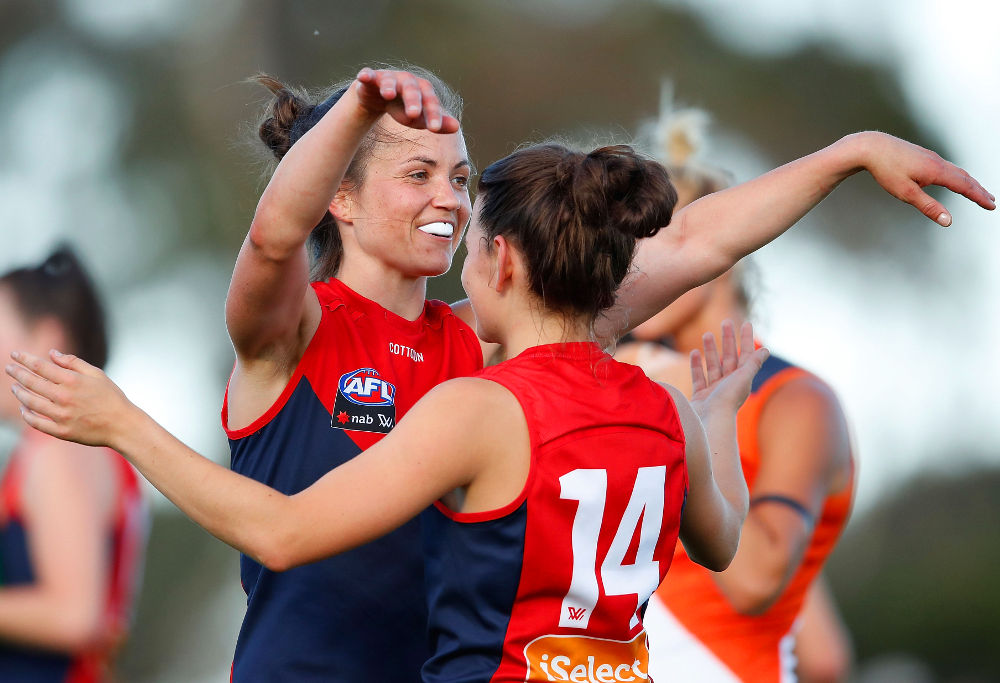 Daisy Pearce of the Demons (Photo by Scott Barbour/Getty Images)

Skills and spectacle
The AFLW’s participants were only afforded professional status a little over a year ago.

The league needs to be afforded time to develop its elite junior pathways, which will bring the most talented Australian sportswomen into the competition with a fully developed arsenal of skills.

These pathways can now be followed with the assurance that there is an elite competition as its destination. But it needs to be provided opportunity and funding to build upon its neglected development institutions, providing aspiring women the most professional environment possible.

These two crucial elements are not there yet, but have been in the men’s game for decades. Hence, AFLW is a generational project that must be given the luxury of patience from the punter and powers that be.

Likewise, teams and coaches should be given the trust and time to fiddle, experiment, design and implement gameplans that best suit the players at their disposal – not have a contrived concoction forced upon them.

Finally, a defining influence on all three areas of criticism is the unavoidable problem of the field dimensions.

The length of all football grounds is the distance between the arcs added to 100. This is not a problem for the average men’s professional player, as almost every AFL player can kick 40 metres, some considerably more. Just about all of them could make it from goal square to goal square in three kicks.

Most AFLW players, on the other hand, are limited to a maximum distance of 30 or so metres in their kicks. Yet they play on the same size field as the men.

In relative terms, it’s like fielding an AFL game on a ground that tallied a length of 250-plus metres. How low would men’s scores be if that was the case?

Women’s cricketers play on grounds that have been reduced in size due to similar distance limitations, yet that is not the case in the AFLW.

These are the issues the AFL should address if they want to improve score, skills and spectacle – not wasting time and mocking the code with myopic, short-term fixes like zones and forced gameplans.

The AFLW is its own game, with a distinct set of conditions, and needs to be judged for what it is in its own right, not what it isn’t in comparison to the men’s.

It needs to be allowed to breathe and evolve naturally, not manufactured by misguided memos.