The Cheshire cat lurking within Eddie Jones burst into full view immediately after his England side secured a hard-fought 12-6 win over Wales at Twickenham.

Grinning from ear to ear, Jones described the contest as “a proper Test match”, and he was clearly delighted with his side’s ability to control a game that, despite the close scoreline and a controversial ‘no-try’ ruling against Wales, was never in doubt for the home side.

Jones certainly seemed happy with the work of TMO Glenn Newman who, even if he was the only person at the ground to believe that Anthony Watson got a touch to a loose ball in the in-goal before Gareth Anscombe, happened to be the only man whose opinion counted.

Whatever may or may not have happened had the call gone in Wales’ favour, England were better organised, able to exert far more pressure on Wales than vice-versa, and were more skilful and decisive in clutch moments.

This was evident as early as the third minute when Owen Farrell, who continues to mature into a fine all-around player, kicked with purpose and intent expertly into space.

Wallabies fans – and Kurtley Beale – need no reminding of Jonny May’s willingness to chase kicks, and his pace, slide and collect to finish was pure class.

May didn’t have as much work to do for his second try, the beneficiary of concerted pressure from his pack freeing up Joe Launchbury on the left edge, who delivered a superb left-handed, round-arm release for the score.

Elite players derive motivation from manifold sources, but it was as if this commanding performance from Launchbury was his way of extending a middle finger to Wales coach Warren Gatland, who had left him out of last year’s Lions tour to New Zealand.

After their domination of Scotland, Wales this week – in particular, flyhalf Rhys Patchell – were given far less time and space in which to operate and as a result, looked ponderous by comparison to their hosts.

They also missed the spark of Leigh Halfpenny from the back, and in the process, decisively lost the kicking (and catching) battle.

This was the domain of England custodian Mike Brown, who was named man-of-the-match – a single handling mistake on such a greasy night an outstanding return. 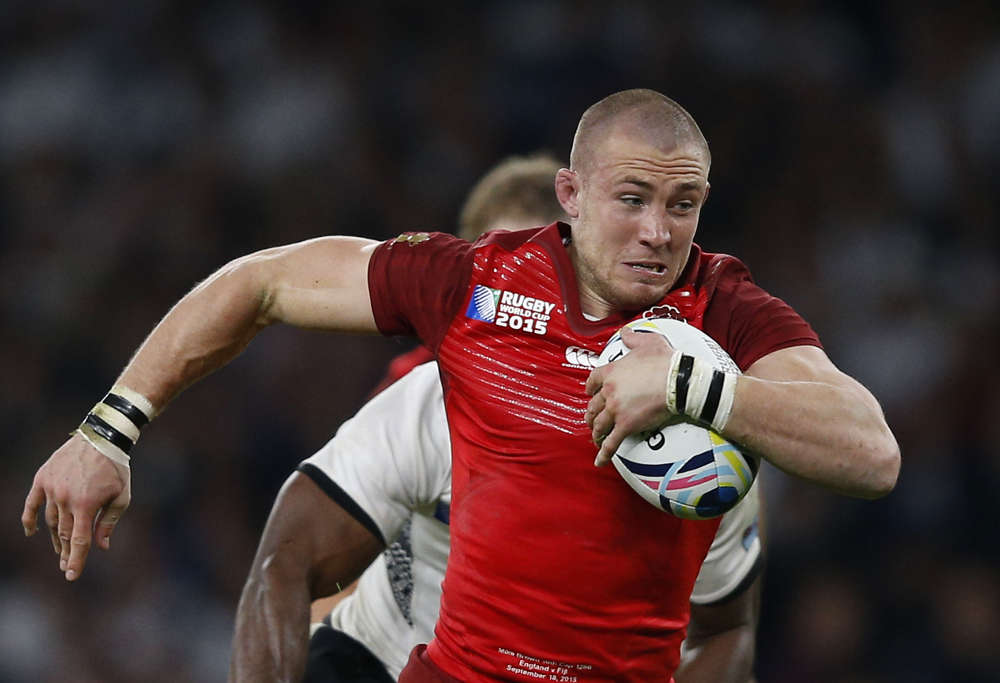 Wales’ fortunes improved as the game loosened up in the second half, a thrilling counter-attack seemingly setting up a try for centre Scott Williams, only to be denied by a desperate tackle by replacement Sam Underhill.

This attack and others were sparked by Gareth Anscombe who, after taking over the playmaker role, looked as assured as Patchell hadn’t.

But for all Wales’ improved endeavour, England maintained their composure and their nine-point buffer until it was too late for Wales to do anything other than secure a consolation bonus point.

In the aftermath, there were inklings of criticism that England, given their dominance in the first half, never managed to truly put Wales away and that the All Blacks will have lost no sleep as a result.

Frankly, this is a question that doesn’t need to be asked or answered right now. England is focused on winning the Six Nations and their tactics and execution – for the conditions and opponent on the day – were exactly what was required.

Bear in mind that Farrell never once kicked for goal from a penalty – a quite remarkable turn of events, where on most other days he could have counted on Wales transgressing at least once to keep the scoreboard ticking over.

This unusual quirk is in no way intended as a slight on referee Jerome Garces, who in fact was impressively calm, relaxed and accurate throughout.

A more predictable outcome ensued in Dublin, where Ireland soon raced to a match-winning lead, scoring eight tries to easily account for Italy by 56-19. Italy displayed flashes of promise and ability but, typically, only after the contest had been decided.

Twenty-one-year-old Matteo Minozzi showed great spark and looks to be a player of real potential, but the Azzurri badly need one or two big forwards to step up and assume the leadership mantle that for too long has been borne solo by the at times superhuman 34-year-old Sergio Parisse.

Tadgh Furlong and Robbie Henshaw are two major injury concerns for Ireland, and while Joe Schmidt’s squad depth is impressive, should the Six Nations come down to a decider against England – as it appears likely – he will need his top liners to be fit enough to travel to Twickenham. 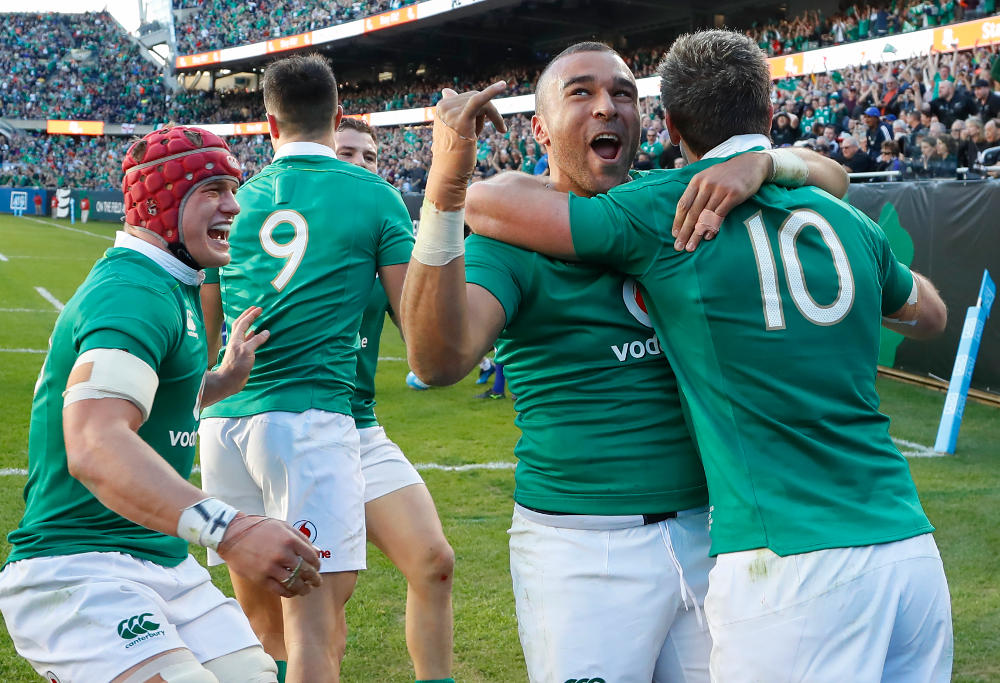 If the England-Wales game was “proper rugby” it’s hard to know what to make of the Brisbane Global Tens, taken out this year by the Blues, 10-7 in the final against the Hurricanes, courtesy of a late, hard-earned try in heavy contact by George Moala.

While everyone knows this result means nothing with respect to Super Rugby, winners are grinners and it is so long since the Blues have won any silverware that even the bulky, Year Ten metalwork project masquerading as a trophy will be welcome at Eden Park.

Another misfire was the Hurricane’s teal uniform – an unnecessary venture away from their distinctive yellow and black, and one that made viewing of their matches against the Waratahs and the Blues far more difficult than it needed to be.

Whatever one’s take on the rugby – which at times closely resembled sevens and at others provided glimpses of forward structure – participating players will be rewarded with a comparative boost in match fitness entering the Super Rugby season.

In that respect, it was a privilege to witness the performance of 44-year-old Andrew Walker for the Brumbies, playing long minutes and not at all looking out of place alongside professional players less than half his age.

The tournament will likely prove beneficial for a number of Queensland and NSW women’s players, a number of whom put themselves into the frame for a professional contract with the Australian Sevens program, and others for the 15s.

Heading that list was 17-year-old Alycia Fakaosilea, who proved that you don’t need to be built like a stereotypical rugby player to be a good one. She was named the player of the tournament, winning a shiny new wok for her troubles.

While lacking the presence and sense of occasion of a world circuit sevens event, one thing the Tens got right was not to clog the schedule with meaningless Bowl and Plate matches.

But with only lukewarm crowd interest in Brisbane, Super Rugby coaches there under sufferance rather than choice and no prospect of other northern hemisphere clubs joining the fray even after only two years, the longevity of the Tens must be under question.

If Jerome Garces was relaxed at Twickenham, how about New Zealand referee Paul Williams, who was on the whistle for Edinburgh’s last minute 29-24 win over Leinster.

Calling Leinster halfback Jamieson Gibson-Park over for a word about trying to milk a penalty, Williams might have been expected to say something like “Blue nine, don’t try any of that stuff again.”

Great to see the refereeing fraternity loosening up somewhat, although Welsh fans with an angry eye towards Glenn Newman might beg to differ.