Ireland coach Joe Schmidt was relieved to pinch a last-gasp win in France, but how will his game plan hold up against other Six Nations rivals?

Ireland has maintained their kicking game. To this day, they still use their box kicking ability very effectively.

However, they have since evolved their attacking game and it comes down to two patterns. In this article, we shall be focusing on the first pattern, being the 3-3-1 looper and its variation.

One is a modified version of the 1-3-3-1. The way the Irish do it, however, is different to other teams who spread the ball wide between the pods. The Irish pods of three (or three-pods) usually operate within a pass of each other, different to the spread out way the Australians do it, for example.

The best way to describe this pattern in words is: “Break the team to make the break.”

The backline portion of this pattern comes after the three-pods have both been used. In this way, it’s very regimented, the template similar every time and it also explains the reasons why Ireland use such a big number 12 rather than a playmaker there as the break portion is dependent on the platform and direction of attack set by the use of three-pods.

Like all Joe Schmidt teams, this has variations. This article will first show the 3-3-1 pattern, which needs a large openside to work, and secondly the 3-3 variation involving the back dummy looper in place of the one-pod.

This is usually when their backline play has only gone to the centre of the field, and they need more space to fully employ it on the reverse switch.

Irish 1-3-3-1 Pattern
Below, we can see the start of the Irish 1-3-3-1 pattern. It’s quite simple – the-three pod are up flat so that it can go to any number of players, and behind, we have a ballplayer highlighted, who can take the ball out the back with a screen pass and pass it out should the call be made. Also, Zebo is on the blind and can take the inside ball Ireland are very keen on.

One phase later, we can see the second three-pod in a similar alignment, taking the ball to contact. Each contact is under five seconds, which means the team are generating approximately a three-second ruck.

This shows the success of Ireland’s breakdown pattern in the three-pod themselves, though they’re not necessarily trying to occupy any given defender, they are trying to constrict the defence.

The looper play is the one which targets defenders surgically. Again we can see Simon Zebo moving across with the passes, maintaining the role as the inside option on the next phase should it be called.

The option of Zebo is ignored on purpose. The ball goes to the one-pod, Tadhg Furlong, one of Ireland’s most powerful carriers. Furlong’s place as the one-pod is more effective as it’s nearest to the overlap where the Irish backline is and that’s where the maximum damage can be done in event of a break close to them.

The use of the one pod here is what makes this the 3-3-1 Looper. Here we see Jonathan Sexton ready to take the ball should it be on, but the numbers are still on the outside for the English, so the ball isn’t shifted.

Subtle use of Furlong
Furlong is one of the strongest carriers on the pitch and the likeliest to create a break close to the edge of the defence. This means if he gets the break, it sucks in defenders from the edge and means more space the backline next to him can immediately utilise. Why? Because defenders have been drawn from the area where Ireland have an overlap.

If he was placed in the first three-pod and made the break, he draws defenders from the centre of the field rather than the edge. This allows the defence to renumber on the inside to target the next three-pod and the ball still has to travel to get to the backline, giving the defence more time to push.

The looper play
After this is where we the Looper play comes in. In their 1-3-3-1, Ireland uses their one-pod forward in three ways:

2. A screen for Sexton

3. As the dummy for the loop play

After the 3-3-1 or 3-3, Ireland nearly always go to the backline, be it over one or two phases. Sometimes, they again will truck it up with the one-pod to make it a 3-3-1 play, or they may reverse the direction and run from the backline there. The key though is that after the 3-3, or 3-3-1, they usually utilise the backline.

In this case, Sexton (red), takes the ball and passes to Garry Ringrose (blue) on a hard run.

While Sexton is making a tracking under run preparing himself to take the ball, Jared Payne is stood very flat. With Payne flat, his option is to either take the flat pass from Ringrose or screen Sexton. Screening Sexton allows him to pass out to Keith Earls (white) on the wing.

We will explore this later in a few examples, but there is quite a bit of obstruction happening in the Irish looper plays. It’s subtle, but it does happen. 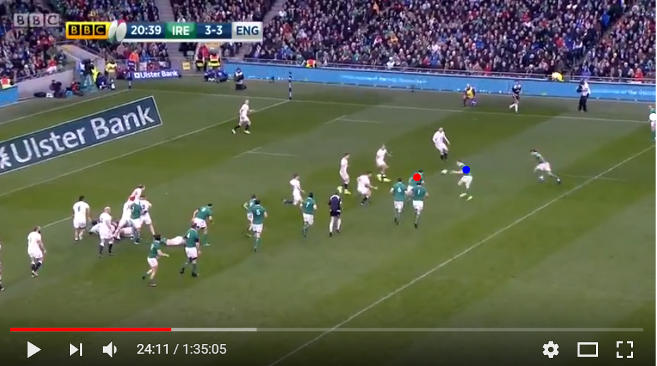 In this case, it doesn’t quite work. The defence reads and rushes up, causing Ringrose to dummy and go to ground. The ball goes to the blind and the forwards on said phase have gone into secure the ruck, leaving only a two-pod available standing off the ruck on the openside as seen below.

However, from out of screen, Peter O’Mahony comes in to support making the three-pod option. There are pods in the Irish system when the numbers aren’t right that go in with a two-pod, however, nearly always, due to the closeness of the previous ruck, you have a third man come in from the prior ruck to assist in securing the ball. This supports the fact of Joe Schmidt’s fundamental focus on the breakdown.

A phase later, we see the second three-pod positioned close to the ruck, trying to occupy the fringe defence.

This placement is two-fold:

1. they’re trying to occupy the defence for a potential inside option for Earls (white).

2. they’re trying to drag in defence from the open further in for the next play.

Ireland’s patterns and tactics
Predictability
This is where the predictability of the pattern can backfire.

Ireland have run a 3-3. The placement of their pods has been done as such to constrict the opposition in a relatively short area of the field.

What play comes next? The looper play and that’s exactly what happens.

The number nne passes out to Ringrose (blue) who takes a hard line attacking the gap between D4 and D5 (green). Sexton (red) runs behind to target the inside shoulder of D6 (purple), and Payne (red/black dot) runs directly behind Ringrose to the inside of Sexton, receiving the ball at near obstruction level and targeting the area between D5 and D6 (green and purple).

This is a cleverly designed looper play. Ringrose occupies the two green players, who are meant to make a two-on-one tackle. Sexton is drawing Courtney Lawes at purple, and targeting his inside shoulder, meaning he can obstruct the gap for Payne to go right through. Theoretically anyway.

Ringrose is not a big unit and doesn’t occupy the green defender’s attention, with them pushing up and going straight through at the last second. Thereby leading to Marler occupying the space designed to be clear for Payne’s run. This is why Henshaw and Bundee Aki are needed as they are powerful enough to commit two defenders in the Looper play attacks.

The Irish clear out and re-target the blind with the Looper play run. What is the next phase going to involve? Yep. Back to the three-pod.

3-3 looper
I like to call this the 3-3 looper. The first play involved the one-pod, which can be used in multiple ways as discussed. On the return, the one-pod has not realigned in his position, Therefore, only the two three-pods are used.

The loop play being made without the one-pod involvement. This explains why the ball doesn’t go wide to Zebo, as the strike point on the defence would be too far from the nearest forward to guarantee possession.

A very well thought out and intelligent plan, with an excellent decision from Sexton.

We all saw Carbery playing the Sexton looper role against Fiji, so it is something they are working on. Expect to see this in the Six Nations.

Ireland are incredibly regimented with this method of playing. Roman Legion-esque. However, this is the optimum pattern Ireland use if they have a full openside, as they have space. And that’s a big if.

As we know though, you don’t always have a full openside to work with. Because of this, once the backline is used and they’re near centre field, they usually try to get back into such a position where they can use this pattern.

Re-establish the pattern
Here we see Ireland on the 20-metre line. This is after they’ve fully used their 3-3-1 backline play and they want to re-establish a position where they can use this pattern, so they go to the blind with a three-pod backs move.

First, they truck up with a three-pod.

Once this is successfully completed, they again have a full openside. As such, they are in a prime position to begin again and they do. They launch their first pod on their first phase to the open, with the yellow/black dot player going in to help secure the ball as a spare forward. Simultaneously, we can see the second pod preparing to run on the next phase just under the first pod.

Now Ireland have used their three-pod, the next stage is the second three-pod, which we can see happen here.

The next stage is the backline.

As we can see from the above, the Irish use this pattern when they have a full openside. When they don’t have the openside they do a series of one out passes to pods, or, they use up the rest of the backline on the blind to manufacture it, so they can get back into their pattern.

The stills from this video show the Irish performing this pattern continuously, in which they also score a try.

I thoroughly recommend watching this sequence of play to see it in real time. Ireland have other patterns that I shall cover later, but for the ball retention policy of Schmidt, this fits very very well.