The third Club Roar Awards are upon us and we’re proud to present the biggest, best and funniest contenders yet in a jam-packed field of nominees and winners.

With $10,000 up for grabs, thousands of incredible videos have been submitted since the second Awards in September.

There will be nine winners across as many categories, ranging from Fails and Funnies to Beastmode, but the major winner will be the Club Roar Award for most popular video.

The Club Roar Award covers absolutely everything across all categories, making it one tough pool to come out on top of as the most popular among viewers and the judging panel.

Chris Gillam sent in a scarcely believable wicket with shades of Michael Clarke and Andrew Symonds thanks to the luckiest of deflections of the foot of the bowler.

Has to be seen to be believed.

Bayley Desmond makes the cut with the GREATEST corner finish of all time. Exaggeration is needed for this one from a Currumbin Eagles winger who soared like his teams namesake to plant the ball down in miraculous fashion.

The outrageous triple-save makes a return to the shortlist having also been nominated in the Fails & Funnies category.

The farcical comedy of errors is just too strange to get your head around.

Standing tall, or should I say flipping, above everyone else is hands down, dead set, fair dinkum the most unexpected wicket celebration you could think of.

Bagging a hat trick is no small feat, in fact, it’s one of the hardest to achieve in cricket, so if you get one it should be celebrated in style.

Well, Alex Calmy from the Perth Cricket Club seized his chance when the opportunity arose and it’s one we won’t forget any time soon…

Incredible grassroots sporting moments aren’t just reserved for Australia, oh no, classic moments happen in amateur sports all the time all around the world.

Bishops College in Cape Town has become one of the most revered rugby schools in South Africa with a firebrand of seamless running rugby that would make any highlights reel.

This one, in particular, is up there with the best schoolboy rugby highlights we’ve EVER seen!

We saw a quadruple kick through try snag a runners-up spot in the Pure Skill category, and while this spectacular effort from Eton College is just the two kicks on the run, the skill and luck involved here is tremendous to pull off.

The winner though comes from the UK in a classic lower-grade stitch up the ages.

Mark McWilliam goes for a gallop coming out of the scrum and proceeds to make his mates on the sideline cry with laughter as he throws dummy after dummy on his way downfield.

He fools everyone time and time again before finally letting off the final try assist pass. Outstanding!

From little legends to teen sensations, the Prodigy Award highlights those unrivalled talents on the cusp of stardom, the hidden gems who haven’t quite been discovered or deserve more with the talent they have on display.

Prodigies can come from any sport and in any style, it’s those who dominate the game individually and as a team player that stands out as the cream of the crop.

Among the nominees, we have an astonishing 6-foot-7 high school basketballer who can dunk like it’s nothing despite being just 16-years-old!

A stepping machine that can dance through an opposition with electric footwork from coast to coast.

And finally, a fuzzy-haired young footy player who loves nothing more than a hard-hitting tackle, putting together some of the best defensive highlights you’ll see.

A master in pulling the defence down from anywhere, it’s rare you see such a young talent putting so much emphasis on one of the more underappreciated talens of the game while still ploughing through the opposition with ball in hand.

Where would sport be without the Little Legends running around at grassroots level, ready to become the next generation of stars?

A possible Messi-clone in the making with footwork and ball control YEARS ahead of his age, reeling in invitational events and tryouts already.

A young lad who doesn’t care for the no-ball line… or his brothers Jatz crackers apparently.

How about an 8-year-old that’s already a shoe-in for any Winter Games of the future, pulling off the kind of freestyle aeriel work that you tried that one time, only to end up with one ski at the bottom of the hill and a bone in your arm pointing in the wrong direction.

Teamwork makes the dream work! A star team is better than a team full of stars… and any other cliches you can think of.

Teamwork is important in sport, even individual sportspeople have teams around them, so it’s no surprise that the Dream Team category has been so hotly contested with a mountain of outstanding videos coming in.

A miracle game-winning buzzer-beater sends the Westside Lobsters into raptures, and with a final no-look pass that shouldn’t have come off at all.

A bit of magic luck across teammates and their boots sets up a ridiculous try.

With the addition of a national rugby league competition to the already popular AFLW, rugby sevens and the success of the Ashes over the summer, women’s sport is stronger than it’s ever been and the athletes have taken it upon themselves to keep raising that bar.

The women in this category prove that there’s certainly no slowing down!

Brunswick Cricket Club’s Laura Crofts reels in a one-handed classic out of nowhere, showing off some serious reflexes by sticking out the right mitt.

Vetaronnica Tafito Fomai’s destructive highlights have already seen her offered a scholarship in the USA as she blazes a path through the rugby sevens game having already represented Queensland in opens as a youth player.

Our winner comes from the South Perth Lions thanks to a blistering long-range meat pie from young gun Rueben Cherrington.

Her resilient strength to break out of any tackle is only bested by her lightning pace across the ground, leading to a solo stunner too good to be missed.

You can’t have all the best bits of sport without the Fails & Funnies that come with it.

The nominees have brought forward a really odd mix of videos, but you’d expect nothing less from the randomness of a sporting fail!

There’s a wayward pooch causing havoc in a classic backyard cricket blunder, an absolute comedy of errors in front of goal that’s straight out of FIFA online.

Not even a desperation catch that sends a folder over the boundary and down a gully can take the winners spot.

Top spot is instead reserved for one man and his unexpected meeting with a tree.

I’ll let you figure it out…

The keg on legs, a human bulldozer, truck, big boppa…

All names for the absolute footy machines and destructive forces that made it into the Beastmode category!

Eva “K-Train” Karpani shows why she’s one of the most powerful rising talents in the rugby sevens circuit by sending defenders flying through the air!

While human rhino Braiden Magele not only dominates an attempted five-on-one maul, but literally throws a handful of human beings to the ground at once in one of the more jaw-dropping tackle breaks you’ll come across.

Neither though were quite enough to take top spot from Joseph Ionae, a barreling bowling ball of pic power, and with legs like tree trunks, you can see why no one can bring him down in this stellar run,

If you ever want a lesson on how NOT to tackle someone, watch the fullback’s attempt to bring the man mountain down.

Pure skill encapsulates everything involved in playing a sport. From the deft touches that take hours upon hours of training to master to the pure luck that any sportsperson needs a bit of every now and then.

An unbelievable outstretched diving catch in junior cricket very nearly took the cake, as did a half-spectacular, half-comical sports crossover that saw four soccer kicks play through for one of the tries of the year in rugby.

Our winner though is one of those jaw-droppers you have to watch back to make sure it actually happened. Basketball highlight reels are packed with dunks, alley-oops and no-look assists, but there are seldom rarer feats in the sport than THIS wonder play from Daniel Owies!

Who do you think should win? What’s your favourite video? Let us know in the comments below!

Wallabies captain Michael Hooper and teammate Samu Kerevi have been named in the World Rugby dream team of 2021.

WATCH: France take out both men's and women's International Try of the Year awards

Damian Penaud and Emilie Boulard were both judged to have come up with the best international tries of the year at World Rugby awards. 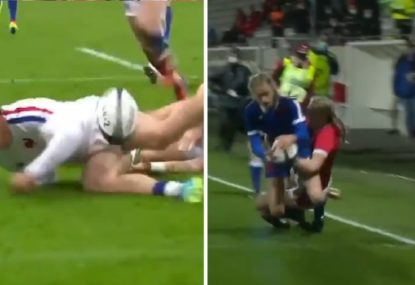 WATCH: France take out both men's and women's International Try of the Year awards

Wallabies coach Dave Rennie and outstanding back Andrew Kellaway have missed out on World Rugby awards on Wednesday. 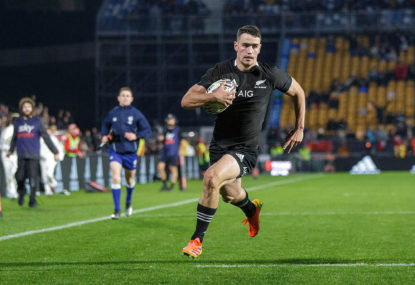 Expansion comes in many forms. For Australian rugby, it will mean development from within, via an NRC-type tournament sitting underneath the Super Rugby tier, and stronger connection with the grassroots at the amateur club and school level, where rugby is taught to aspiring athletes.

The rugby season finished on near a perfect note, with the Aussie sevens women taking out back-to-back Dubai tournaments and the men runner-up to the South Africa Blitzbok juggernaut in a close match. However, just as one would hope a great story or two could be spread all about rugby success, the lead story is […]