West Coast made the grand final in 2015 off the back of an exceptional season implementing the ‘Weagles Web’, and the prospect was of greater things in the future. Finals appearances followed in 2016 and 2017, but they were never a premiership threat in those years.

The wheel turns quickly in AFL circles, and all of a sudden the Eagles are at something of a crossroads. They’re a popular pick to drop out of the eight and slide well down the ladder.

The West Coast list is already undergoing significant change given there are four players that played in last year’s finals series no longer at the club – Matt Priddis, Sam Mitchell, Drew Petrie and Sharrod Wellingham.

Including rookies, 46 per cent of the Eagles list has played 11 games or less, and they have 16 players yet to be seen at AFL level. This is a squad of many unknowns.

We saw the rebuild start last year, even while staying in finals contention. At various stages Adam Simpson was prepared to move past old hands like Will Schofield and Eric Mackenzie down back, and Chris Masten and Mark Hutchings in the midfield.

Are the likes of Mark LeCras and Jamie Cripps under the gun up forward this season, especially given certain list additions in the last off-season or two?

West Coast’s backline is clearly their strongest area of the field.

Jeremy McGovern has permanent residence in the All-Australian defence as the best intercept marker in the competition. He can be all but impossible to pass when in the zone, and wins games for his team when opposition sides can’t find a way around him.

Tom Barrass continues to develop as the number two key defender, Shannon Hurn delivers with precision but appeared to add more link play to his game in 2017, and Elliot Yeo finally delivered on his promise with an All Australian year of his own.

Each of these players win the ball back off the opposition through canny positioning and elite defensive cover and system, along with the confidence to back themselves in. They are an exceptional defensive unit when the game is played on their terms.

An example of this was the elimination final against Port last season, when the Eagles conceded 63 inside 50s, yet still won the game thanks to firm aerial defence.

Brad Sheppard is not an interceptor, but locks down effectively when given a job, and Liam Duggan was handed run and rebound responsibilities last year and grew into his role. The aforementioned Schofield and Mackenzie are in reserve, which is handy experience to have. They may be required if Yeo moves up the ground to bolster a weak midfield.

Speaking of the midfield, it’s the biggest concern for the Eagles. It looks tissue-paper thin outside of Nic Naitanui and Luke Shuey.

Naitanui suffered his ACL injury a full 18 months ago, and still wasn’t right to take the field in West Coast’s first JLT Series match on Sunday. What level will he come back to, and is there a danger his return might be a while off yet? Concerns are growing. 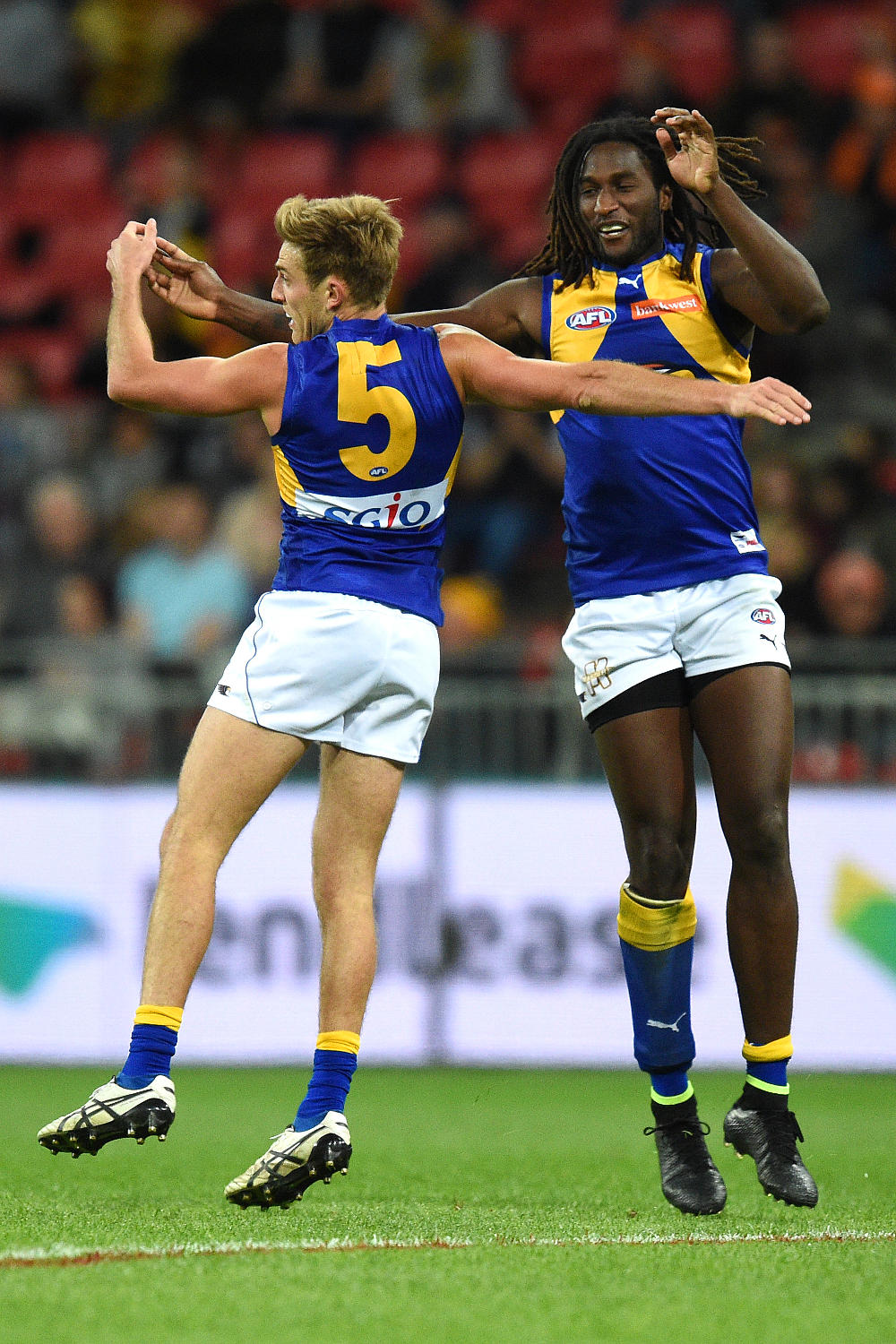 Nathan Vardy was serviceable last year, with the odd highlight. Scott Lycett is also on the comeback trail and is a proven commodity, to a certain level. These two are fighting for one spot if Nic Nat is in the side, but opposition sides don’t lose sleep preparing for either.

Shuey is an outstanding competitor, and arguably a top 20 player in the competition. He’s explosive from stoppages, a fierce tackler, and has strong goal sense. He maintains a high standard at all times.

Andrew Gaff has admirers, but if you want an anonymous 30 disposals a game, he’s your man. He becomes a restricted free agent at the end of this season, and if a full rebuild is called for, fans should be hoping a few Vic clubs overrate him and pay accordingly. Many do.

On the other wing, Lewis Jetta is still far too inconsistent after eight years in the system but a move to half-back has been mooted. He looked okay there on Sunday. Jack Redden’s responsibility will grow in the absence of Priddis, and you’d think he’d be setting himself for a big year. Few have the knack for laying a tackle like him, and he’s a genuine ball-winner too.

Masten and Hutchings, mentioned earlier, may find themselves back in favour, which feels like going backwards.

Dom Sheed is something of a bright spot entering his fifth season, but was he that much better last year than he was in the second year? He played more in the centre, certainly, and gets a chance now to stamp himself as the number two midfielder at the Eagles.

West Coast’s forward-line is shaping to have a different look this time around, but will still be heavily reliant on the two key forwards.

Josh Kennedy and Jack Darling are the perennials, and we know what we’re going to get from each. Kennedy is on the wrong side of 30 for the first time, and his body is starting to creak just a little. Darling is a little bit underrated, but could still do more. He has too many quiet patches. 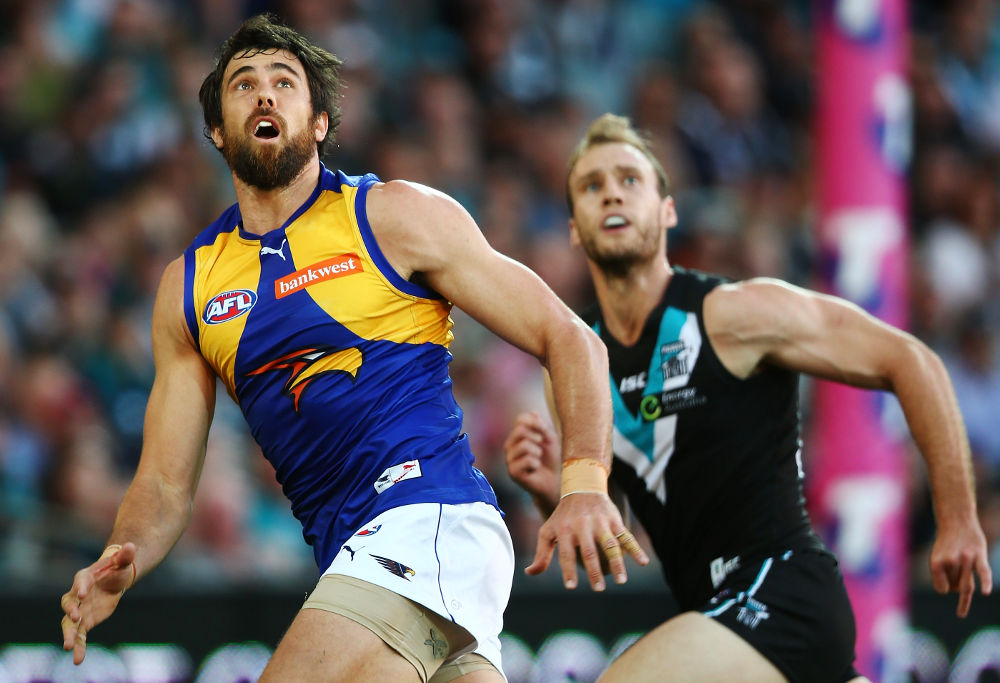 Brendon Ah Chee has been brought over from Port to add some forward bite. Willie Rioli is expected to get many chances to further enhance the family name. Liam Ryan is a 21-year-old small forward coming off a 73 goal season in the WAFL. List management has identified a clear weakness.

West Coast won 12 games in the home and away in 2017, but only one or two of these were of any significance, or suggested they could be more than a middle-of-the-road team. It’s impossible to see them climbing up the ladder now. A fall is certain.

The midfield won’t be able to get enough football into forward 50 to kick winning scores. They will concede too much against good sides, and their defence, as good as they can be, will eventually crumble.

An interesting wrinkle is the fact that West Coast traded out their first and third round picks for this year’s draft, to Gold Coast and North Melbourne respectively. In return they have the Suns’ second-round pick. Using this prediction series as an approximation, instead of pick 6 this year, they won’t enter the draft until pick 19.

A 0-3 start is very much on the cards for the Eagles with Sydney and Geelong at home either side of the Bulldogs away. And it may not get much brighter after that. The future is middling.