My favourite scene in the history of cinema is the climax of Raiders of the Lost Ark, when the Nazis open the Ark of the Covenant.

What they find inside is so powerful, so next-level, beyond ordinary humanity that their faces melt clean off – the punishment of God for daring to look at something man should never gaze upon.

If you’ve read a bit of what I’ve written about Geelong lately, you might have heard me use this as a metaphor for the trio of Joel Selwood, Patrick Dangerfield and Gary Ablett once or twice already.

My sincere apologies for the repetition – but there’s just nothing else that better describes the feeling of awe and terror I get when I consider what it’s going to be like to see these three, probably all first-choice players in a best 22 of the millennium so far, on the field together.

Between them they boast three Brownlow Medals, 19 All Australian selections and 12 club best-and-fairest awards. Together they averaged a combined 88 disposals, 21 clearances and 2.6 goals per match in 2018 (1.9 of those goals coming from Danger).

We’ve seen two open seasons of footy in a row where the best teams are very good, certainly, but not great – not on the level of the ‘superteams’ we’ve seen Brisbane, Geelong and Hawthorn put on the field since the turn of the millennium.

Gary Ablett’s return to the Cats may well have brought an end to that brief era. A Geelong side that can name a midfield trio like that – and has Mitch Duncan as the best fourth-midfielder in the competition – might be in a league of its own.

There are concerns, sure. Ablett’s fitness is no guarantee – he has missed 39 of a possible 88 games in his last four years. If his body breaks down, the Cats may find themselves exactly where they were in 2016 and 2017 – so close, but so far.

And of course because the football gods like to laugh at my article-writing plans, it was reported yesterday that Ablett has picked up a minor hamstring injury – though Geelong are confident he’ll be ready for Round 1.

There’s a very real chance that this all collapses in a heap and proves to be a major embarrassment for the Cats (and me). But it wouldn’t be much of a prediction if there wasn’t.

What are the chances though that a move home just makes it that much easier for Ablett to stay healthy and have a consistent performance across the season, perhaps resting for one or two matches but being fit and ready to go in finals? 50-50 maybe? I like those odds.

So yes – the Geelong Cats are my tip to win the flag in 2018. And Gary Ablett is undoubtedly the biggest reason why. But, he’s not the only one. 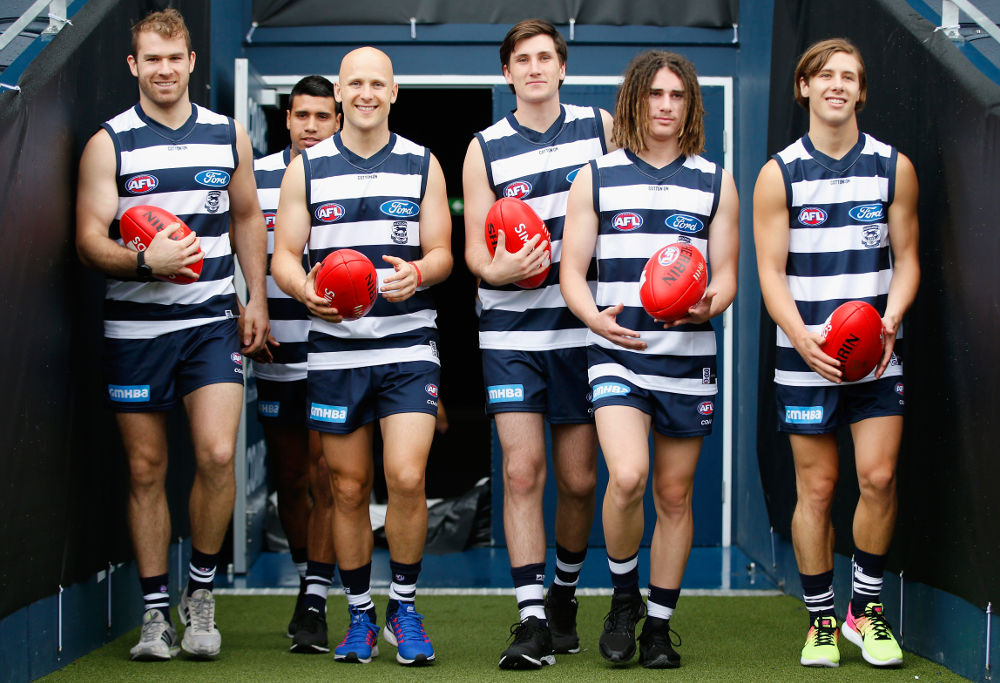 In terms of new arrivals, Ablett was certainly the main event in the offseason, but the Cats – considering they didn’t have a pick inside the top 20 – also did well in the drafts.

With their first selection, No.22, they took Lachlan Fogarty – a tough small forward who wasn’t expected to be there that late with Brisbane and Gold Coast both reportedly keen on picking him in the teens.

They followed that up by taking mature-age star WAFL midfielder Tim Kelly with pick 24. Kelly had 26 disposals per game in the WAFL last year, kicked 26 goals from 24 appearances, and finished second in the Sandover Medal.

Charlie Constable came next, at pick 36, a big inside midfielder who was expected to go higher by many. Small forward Gryan Miers followed, pick 57, having kicked seven goals for the Geelong Falcons as they won their first TAC Cup grand final in 17 years.

Lastly, Geelong threw a lifeline to former Bomber and Bulldog Stewart Crameri in the rookie draft. I’ll admit I was pretty sceptical of this being a good move at the time, but the more thought I put into it, the more I like it.

Constable and Miers are both going to need some time to develop before they’re ready to play senior football, but I wouldn’t be surprised if all three of Fogarty, Kelly and Crameri debut for the Cats in Round 1, and together have a serious impact in 2018.

Throw in a return to the backline for Harry Taylor now that Tom Lonergan has finished up – and hey, how about an injury-free breakout season for Nakia Cockatoo while we’re at it – and there’s plenty of good reasons why Geelong can go all the way.