Pre-season preview: Who can stop this perfect Storm

The Storm put together one of the most dominant seasons in recent memory to walk away as champions in 2017.

The Storm lost on just four occasions in 2017, easily the best record in the competition. They were the best attacking unit, and had easily the most miserly defence.

It looked likely that the Storm would be crowned premiers a long way out from season’s end. There was always a fair bit of difference in class from them to the other 15 teams.

The story of the off-season has been the defection of Cooper Cronk to the Sydney Roosters. It was long known that Cronk would have his last season in purple in 2017, but it was uncertain whether he would continue on elsewhere until after Melbourne’s grand final win over the Cowboys.

The move ends the dynasty that Cronk, Cameron Smith and Billy Slater created at club, state and international level. Though 2017 marked the long-awaited return of Slater from a string of serious injuries, their win over the Cowboys is probably the last time the three will play together.

How does their squad rate?
The Storm have lost Cronk, Jordan McLean, Tohu Harris and Slade Griffin, while Ryan Hoffman and Sam Kasiano headline the list of recruits.

Even with some high-profile departures this is a squad stacked with class.

Slater picked up where he left off last season in a wonderful return from injury. He is still in the top three fullbacks in the game.

The wing pairing is the most potent in the game. We all knew Suliasi Vunivalu was a weapon from his debut season in 2016, but Josh Addo-Carr was just as good in 2017, as they scored 42 tries between them for the regular season.

Will Chambers is a mainstray in rep sides at centre. They have a few options for the other centre position, such as Curtis Scott and Cheyse Blair.

We saw only a limited amount of game time for Brodie Croft last year, who will get first crack at halfback, but he looks a prospect. They also have Ryley Jacks, Billy Walters and Cooper Johns in their play-making stocks.

Cameron Munster has developed into an Origin-quality half and is also cover if Slater goes down.

The pack has plenty of size, aggression and depth. Nelson Asofa-Solomona and Felise Kaufusi are coming off their best seasons, Tim Glasby was picked for Queensland in 2017, Dale Finucane is one of the most reliable locks in the game, and Kasiano looks the fittest we have seen.

Cameron Smith is coming off a year where he won the Dally M medal. They have depth too, with Brandon Smith making his debut and looking the goods last year. 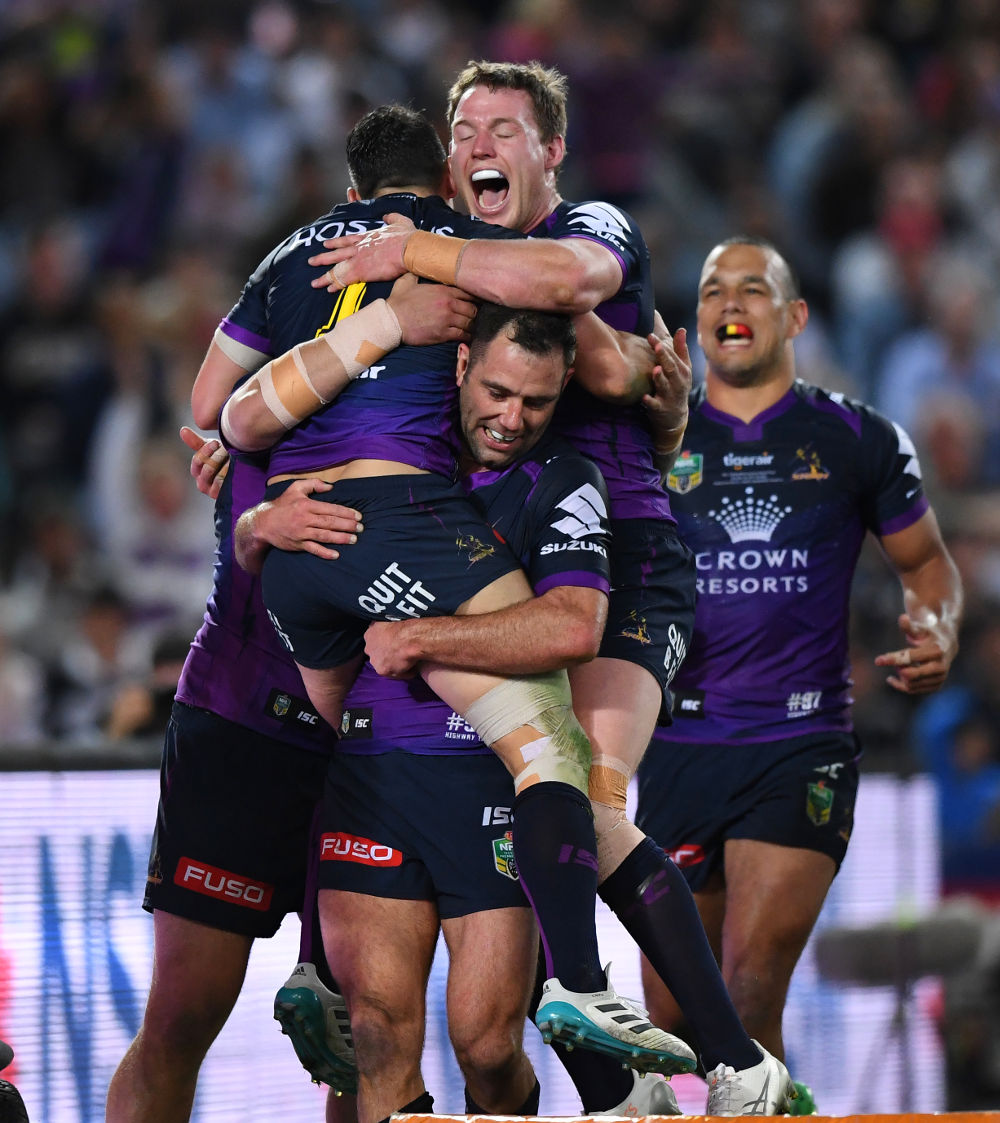 Key men
Smith and Slater have retirement in sight, but you wouldn’t know it from the seasons they had last year, becoming champions at club, state and international level.

The Storm have plenty of other players who will have a big say if they can go back to back, but none bigger than these two.

We saw how far the Cowboys got last year without their superstar halfback, Johnathan Thurston, but at the final hurdle they missed his class, experience and composure.

The roster is the best in the league, the coach has done it all before, as has Slater and Smith. But if they want to do it two years running, it will be up to these two to keep the group focused, show the leadership they are renowned for, and hopefully stay fresh enough to last the distance.

Where do they need to improve?
Fifteen teams will be trying to find a weakness in this machine-like outfit.

They had little room for improvement last year, and it was telling in the way they emphatically dispatched of a number of opposition teams.

Top five clashes
Round 3: Storm vs Cowboys, AAMI Park, March 22
A home grand final rematch will be the first real challenge of the season for the Storm. It might have been a big win in October last year, and a record of three from three against the Cowboys last season, but the boys from the North will be up for the challenge.

Round 4: Sharks vs Storm, Southern Cross Group Stadium, March 30
There is always plenty of spite and feeling in this game. Grand final combatants in 2016, they have traded barbs since.

Round 16: Roosters vs Storm, Adelaide Oval, July 5
The only opportunity Melbourne will have to take on Cooper Cronk in the regular season. Both sides should have aspirations of a top-two finish.

Round 23: Storm vs Eels, AAMI Park, August 17
The Eels were one of only four teams to lower the Storm’s colours last season and they very nearly did again in Week 1 of the finals.

Round 25: Storm vs Panthers, AAMI Park, August 31
The Storm haven’t been troubled by the Panthers at home since the early 2000s. Melbourne could well be crowned minor premiers at the end of this match. Who knows what the Panthers will be playing for.

How will they go?
You could wax lyrical all day about the reigning premiers.

Early in the season you would expect them to just keep on keeping on. They looked just as sharp in the World Club Challenge as they did last October, with Croft slotting in for Cronk nicely.

In seasons gone by, they have struggled over Origin, but in 2017 they just kept the talent coming. Even injury wouldn’t dent their hopes too badly.

As is always the case with the premiers, it will come down to managing fatigue and finding the same hunger to do it again – we saw the Sharks burn out badly at the end of last year.

A number of players featured in the World Cup last year and will play Origin this year. Will they have the legs at the end of 2018?

The Storm will be preliminary finalists at worst, but they will encounter a team that just wants it more and puts together a perfect performance to topple them.