Pre-Season Preview: Panthers footy will do the talking

Rumblings of unrest, players leaving, coaching issues – the off-season has had it all for the Panthers.

The feeling once was that Cartwright and Moylan were the club’s future – homegrown, talented youngsters who had long deals into the future. Both left for various reasons and fans will have to buy into the validity of those.

Controversy and speculation aside, on Sunday afternoon at Panthers Stadium we will start to get a real look at how this team is going and it’s doubtful they could start the season as badly as they did in 2017.

Penrith went into last season as premiership favourites but were routed by the Dragons in Round 1, and went on to lose seven of their opening nine games.

Coming back from such a poor start was a testament to their spirit and commitment.

The continuing stream of youngsters coming through is also encouraging. Dylan Edwards and Corey Harawira-Naera were the strongest of the new bunch, with Tyrone May and Villame Kikau also impressing. They may be losing talent, but salary cap pressures mean you can’t keep all of them.

Nathan Cleary isn’t superstar status yet, but if he keeps improving at the same rate it won’t be long. On at least two occasions last season he won the game for the Panthers, and was a key contributor in many more. Without him, they just wouldn’t have made it to September.

The departures of Moylan and Cartwright may yet be a factor in the bigger picture of retaining Cleary.

James Maloney is the key in 2018. His recruitment can do wonders for Cleary, having some consistency and experience in the halves.

How does their squad rate?
This is a top-eight roster.

Edwards made a real fist of fullback after taking over from Moylan midway through last year. He is not the provider that Moylan was but is a strong ball runner, makes plenty of metres and is defensively strong. We saw how much they missed him when he was injured for their last regular-season game against Manly.

Josh Mansour was the form winger of the competition in 2016 and thus was sorely missed at the start of 2017. His kick returns get his side’s sets off to a good start, he busts plenty of tackles and acts as an extra forward at times. He is also a good finisher.

Dallin Watene-Zelezniak was solid last year but had a high error count for a winger. Anthony Griffin will similarly want more from Dean Whare and Waqa Blake this season.

The halves pairing is promising. Maloney has played at the highest level of the game, and will be a good foil for Cleary. Talk of them being the Origin halves is premature but not out of the question.

Reagan Campbell-Gillard comes off his best season, and will be pushing for sky blue jumper. James Tamou was disappointing in his first year at the foot of the mountains but is an Origin prop on his day. They have Tim Browne and the returning Sam McKendry as the likely big men off the bench. Peter Wallace has had his career rejuvenated out of the hooking role.

The second row is stacked. Issah Yeo and Harawira-Naera were consistent on the edges last year, while James Fisher Harris was the club’s rookie of the year in 2016.

Most importantly, the Panthers need a good run with injuries after a number of short-term but disruptive issues in 2017. 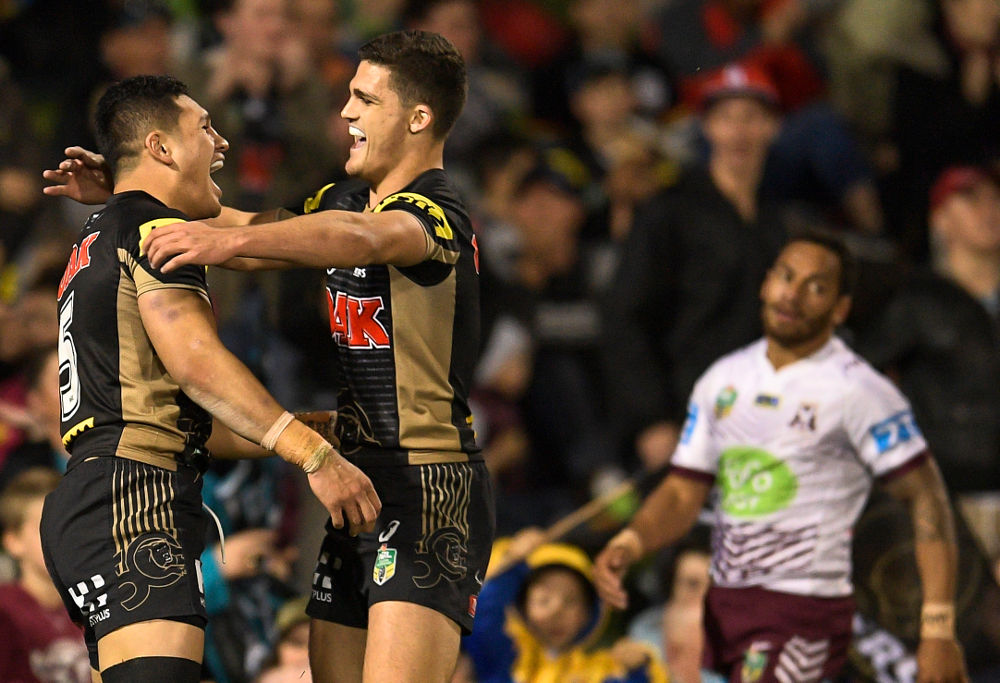 Injuries
Dean Whare will miss Round 1 with a hamstring complaint, with Tyrone Peachey to play centre. New recruit Tyrone Phillips is out until mid-season, and Tyrone May will miss the early rounds with a torn ACL.

Key man
James Maloney arrives at his fifth and possibly final NRL club, but can he add to his already impressive resume?

While not a superstar, he is understated in the way he goes about his work and needs to do what he has done at every club up until this point. He is experienced and composed, and brings the winning mentality that comes with those qualities.

He has experience at Origin and international level and is the winner of two premierships, both in his first season at a club. He also helped the Warriors to a grand final – their last appearance in a finals series, back in 2011.

Nathan Cleary has had five halves partners already in just 41 games. None have really been a genuine, in-form, experienced five-eighth with the pedigree of Maloney. If the pair stay fit they have a minimum of two years to build a combination that can win the Panthers a premiership.

Cleary has been outstanding for the Panthers, but when the whips were cracking last year, and Penrith were playing top eight teams, they looked desperately in need of a player with some game management.

James Maloney has a bit of everything to offer the Panthers. While Matt Moylan may yet go on to forge a great career at five-eighth for Cronulla, what the Panthers need right now is a wily old head for their talented young halfback. Maloney fits the bill perfectly. 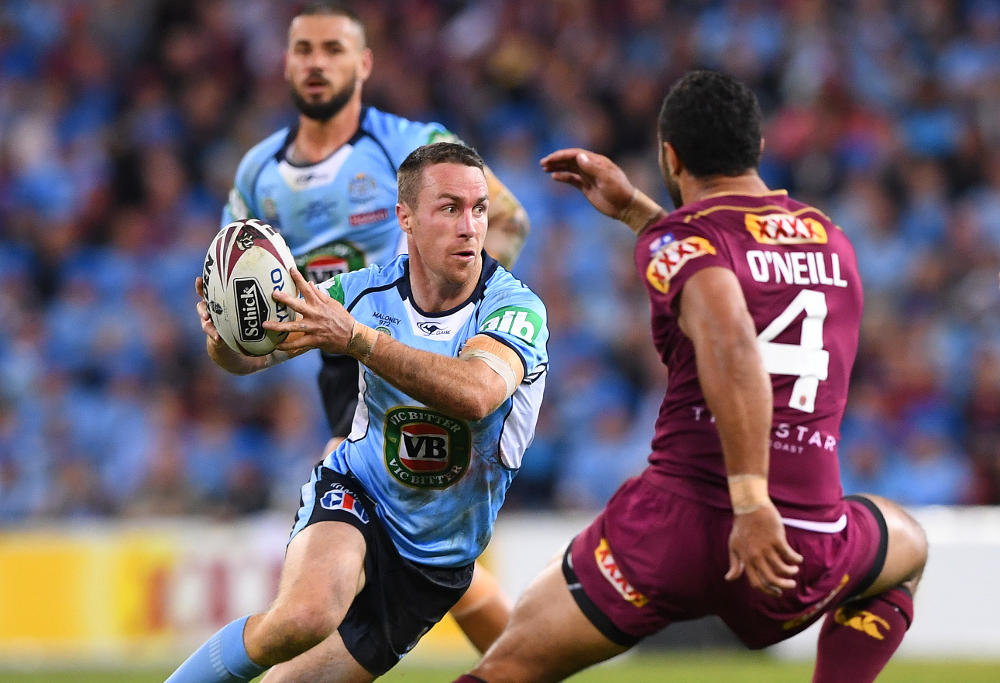 Where do they need to improve?
A few areas. The Panthers fielded the youngest side in the league at times last season and it was telling in some of their weaknesses. They missed a whopping 33 tackles per game. They struggled with discipline and consistency too.

They could lose touch with games in an alarming fashion and really capitulate. Their first-round loss to the Dragons to the tune of 42-10 was a good example. Alex Johnston bagged five tries in an afternoon against the Panthers mid-season. They were routed in the final round against Manly.

In saying that, they could also lose games with just a play or two in it. They lost four games by two points or less. Those are the kinds of fixtures that Maloney should be helping them win this season.

The Panthers’ results were all over the place in 2017 to put it plainly. They could win 40-0 one week and look bereft of ideas the next. If they can have the same attitude in multiple games and stay patient, they will develop that consistency.

There was a train of thought that if you kept turning the Panthers away, and frustrated them, they would eventually fold mentally. They could keep pace with the sides in the bottom eight, and really turn it on too. They also won their fair share of the close ones.

But they need to step up and show the kind of consistency we see in the top four sides.

Top five clashes
Round 1: Panthers versus Eels, Panthers Stadium, March 11
A warm afternoon in the golden west for two traditional rivals. This will be a real test for the Panthers against the potency of the Parramatta backline. Hopefully it will be a good contest for the big crowd to enjoy.

Round 7: Sharks versus Panthers, Southern Cross Group Stadium, April 22
A number of ex-panthers now play for the Sharkies. Luke Lewis, James Segeyaro, Wade Graham, and most recently, Matt Moylan. James Maloney faces his most recent club in a game that should show where both these sides are at.

Round 9: Cowboys versus Panthers, Carrington Park, May 4
One of the competition heavyweights head out to Bathurst to take on the Panthers. The country town has been kind to the Panthers, they’ve won their last three games out west, including a dramatic last-gasp win last season. What can the Panthers do this year?

Round 17: Panthers versus Warriors, Panthers Stadium, July 6
In one of the most dramatic wins last season, the Panthers came from 22 points down, scoring an unanswered 30 points in the second half to save their season. Will this be a similarly intense game?

Round 25: Storm versus Panthers, AAMI Park, August 31
The only fixture between these two sides this season. The Storm are quite comfortably the Panthers’ bogey team. On the eve of the finals, this will show where both are at or be the final nail in the coffin of the Panthers’ season.

How will they go?
As a Panthers fan, I’ve got no idea what to expect this season. It’feels like it’s going be one extreme or the other.

Either all the chatter is spot on and there is no harmony in the joint. They get off to another horrible start, and Hook is sacked by seasons end. Where there is smoke there is fire, as they say.

Or Maloney and Cleary strike up a natural combination and push the Panthers towards the top four.

There is fight and spirit in this group. They picked themselves up off the canvas a number of times last season, and in 2016 too. Down by eight with two minutes to go in Bathurst. Down by 22 points at halftime against the Warriors. Needing 11 wins from 15 games.

You don’t win games like that, or come back during the season if there isn’t culture and belief within the group. You can try and put it down to a soft draw or whatever you want but that is selling a team short. Every week is hard in the NRL.

They didn’t have the experience in key positions or a good enough run with injuries to go any further than they did last season. If they had Maloney in the final against Brisbane would they have got the job done?

Maloney adds that touch of class. If the spirit in which they played last year remains and Hook still does have the playing group, this is a roster more than capable of making the finals.

We don’t have to wait long to find out how things really are at Penrith.

After 20 rounds, 29 weeks, 1165 tries and one too many trips to an Italian restaurant, the regular season of the NRL has finished.