Mathew Lodge and the moral issues of rugby league

I suspect Matthew Lodge will be a minor story by the end of the month. Media attention seems to have died down this week ahead of Round 2.

I can’t imagine crowds will muster the strength to boo his every touch of the ball all year like they did at Kogarah last Thursday.

And I suspect the Broncos have been counting on both the public and the media losing interest. It is perhaps why they tried to ignore the issue altogether before the season began – after a little while, who’s going to care?

Personally I’m sympathetic to both sides. I can see why some people have argued to exclude players with history like Lodge. It’s not a desired association for the NRL or rugby league in general. I find merit in the argument that violent criminals forgo their right to play sport at the highest level, with the accompanying celebrity status and riches. However, I’m also persuaded by the redemptive argument. I find Lodge to be genuine in his remorse and I believe in the power of second chances for those willing to take them seriously. I believe people should be able to make mistakes, make amends and make a new future.

The make amends part is the issue. As a Broncos fan, I would find it much easier to argue for Lodge’s place in the side if an arrangement had been made for him to begin paying the settlement set out by the US courts.

That would have been a indisputable sign of remorse. In that sense, it is imperative that Lodge plays – otherwise it is extremely unlikely he will be able to pay back his money owed. I hope some sort of arrangement can be made here to the satisfaction of both parties.

As a Broncos and rugby league fan, I’ve had to think about how much I can stomach and still love this sport. The Lodge incident is a tricky one for sure, but with several extenuating circumstances. When thinking more broadly about the sports, I find more concerning dilemmas that run to the core of the game.

For example, can I genuinely be alarmed by alcohol-fuelled violence and alcohol abuse in society while still supporting a game so heavily sponsored by alcohol companies? Can I honestly turn a blind eye to the menace of gambling while enjoying a competition bankrolled by betting companies?

Every leagues club in the country is reliant on booze and pokies – at what point is the footy just a friendly face for those looking to profit off the misery of addicts? Hell, does The Bunker cause obesity with their delicious KFC advertisements before every video ref decision?

Now, I’m not sure it’s really all that depressing. Rugby league does a lot of good and brings a lot of joy to people all around the world. And yes, at some point, personal responsibility comes into play in regard to alcohol, gambling and fast food. The problems caused by these vices would remain without a XXXX logo on a footy jersey or a betting ad before State of Origin.

I’m not about to boycott the sport. However, I do think it’s worth thinking about the moral issues raised by the greatest game of all. These are questions that will remain a long time after crowds stop booing Matthew Lodge.

As expected, the Souths coach was in no mood to discuss Latrell Mitchell’s form. 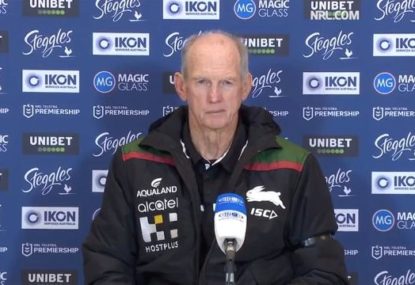