The Socceroos ushered in the Bert van Marwijk era with a 4-1 loss to Norway. The final score line was never the priority as the match was seen as an opportunity for the new manager and the players to further familiarise with each other.

It’s too premature to judge van Marwijk’s philosophy after just one match. However there are some intriguing early signs of what to expect from the Socceroos in the World Cup.

1. Embracing 4-2-3-1
The most noticeable change to the Socceroos is the new 4-2-3-1 formation. It is generally regarded as a more defensive set-up than 4-3-3, which was preferred by Ange Postecoglou.

Despite this ignoble start, don’t expect the Socceroos defence to remain porous. A greater understanding of van Marwijk’s tactics and improved chemistry among the players should solidify the defence.

2. Defending corners
Every defensive corner will be a heart-in-mouth experience since van Marwijk has adopted a strictly man-on-man marking system. This defensive style emphasises on individual responsibility; however it is susceptible to confusion and mismatches.

This approach is not popular in modern football. Many managers prefer a mixture of zone defence and man-on-man marking, because it greatly eliminates the possibility of a free header to the opposition.

Even if the designated marker fails the track his attacker, one of the zone defenders can step in and contest the shot. In addition, this synthesised approach ensures that key vulnerable areas of the penalty box will always be protected.

A Norwegian corner in the second half highlighted the deficiency of the Socceroos’ approach. Four or five Norwegian forwards decided to position themselves within two metres of goalkeeper Mark Ryan. This created a rather farcical sight as the marking system meant that there were ten players crowding within the small penalty box; subsequently exposing the entire penalty box to the other forwards.

Although Norway didn’t score from a corner, a team of better quality and awareness will ruthlessly take advantage of this defensive arrangement. 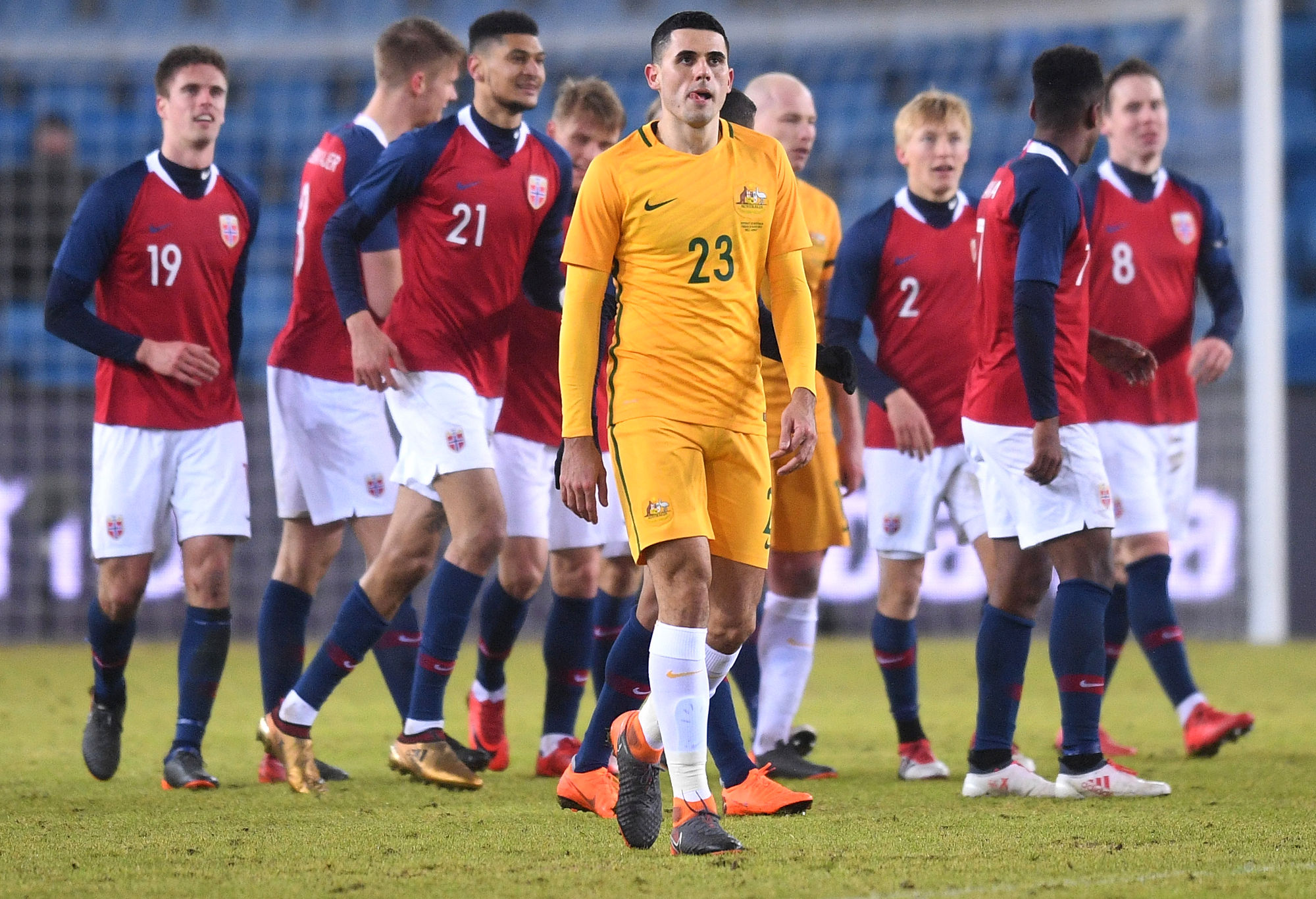 As shown in past matches against quality opponents with an aggressive press, the Socceroos lack the quality to execute such a high risk, high reward game plan. Rather than intricate give-and-go interchanges, the Socceroos backcourt often resembles more of a panic mess.

This dogmatic attitude to ball movement has meant that the Socceroos are very predictable. The opposition knows that if they can restrict supply to Aaron Mooy and minimise his influence then much of Socceroos offensive thrusts are nullified.

Currently, none of the current crop of centre backs qualify as a good passer of the ball. Van Marwijk is guaranteed sweat and toil from Mark Milligan, Milos Degenek, Bailey Wright and Trent Sainsbury. But no matter of their admirable labour, their technical ability is not suited to playing out from the back.

The demand on playing out from the back is high. Players need to have quick wit and are often required to improvised out of dangerous situations. A good understanding of teammates’ movement in the system is also crucial in order for this game plan to succeed. At the moment, the Socceroos lack both the type of player and the chemistry.

The Socceroos are their own worst enemy in defence. With less than three months remaining, Van Marwijk needs to consider whether to persist with playing out from the back. Is the gamble worth it? Because right now, it’s not.