While a humbled Australia stands aghast at the weekend’s events in Cape Town, Australian cricket would do better to acknowledge its complicity in arriving at this point.

For the sudden outburst of national hand-wringing over ‘tapegate’ belies the fact that the Australian Test cricket team has long been a source of embarrassment.

If in doubt, one need only gauge the international reaction to this incident which has been comprised of as much glee as condemnation.

This is not to downplay the gravity of the outrageously brazen act of ball tampering committed by the Australians. Rather to place it in its proper context, which is the nadir of a very poor pattern of behaviour displayed by a national sporting side over a long period of time.

After all, Australian Test cricket has been losing friends for decades.

I have previously detailed in this column, the evolution of Australia’s ‘win-at-all’ costs approach, which had its genesis in ‘Captain Grumpy’, Allan Border’s antisocial 1989 Ashes campaign.

Lauded as the means by which Australia finally escaped Test cricket purgatory and then obscured by the golden generation of Warne et al, this approach has since long been on the nose.

Indeed, the cultural cringe inducing ‘baggy green’ has become a symbol for increasingly ultra-competitive, boorish behaviour as the Australian Test cricket team has reprised the role of ‘series-spoiler’ time and again.

Yet, by continuing to focus on results rather than behavioural reform, Cricket Australia and large sections of fans alike have given their tacit approval to such antics and in so doing, have imbued the Australian Test cricket team with an air of invincibility.

One need only take Steve Smith’s feeble post-match mea culpa – which smacked of, “If I just promise not to do it one more time, will you let me go?” – to sense how tightly these players have been wrapped in a cloak of immunity. While this is not to suggest tapegate was inevitable, the level of national astonishment that has greeted the news points to a country with its collective head firmly buried in the sand.

The hope now is that this sorry saga will act as Australian Test cricket’s desperately needed catalyst for change and that a more image-conscious national team will emerge from the rubble.

For lost amidst the current furore is a sickly game in Test cricket, which is looking increasingly forlorn in the current action-packed sporting landscape where instant gratification is king.

So much so in fact, that it is difficult to fathom Cricket Australia’s hitherto intransigence in the face of a national team that has so long been the pariah of international Test cricket.

Now we wait to see if Cricket Australia’s impending intervention is sufficient to stop Smith and co (and future generations of Australian cricketers) fulfilling their unintended roles as pall-bearers of Australian Test cricket.

One of the best batsmen in the world... quickly made Virat look a fool for having a go at him! 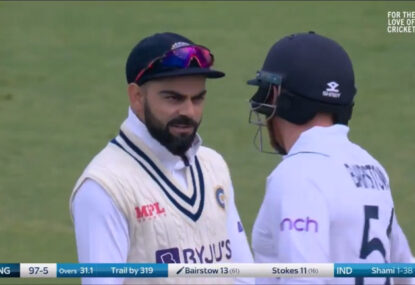