Tapegate: Be angry, but keep it in perspective

Too often when an event such as what is occurring in South Africa occurs, we bay for blood, instead of taking stock, looking at all the facts, and arriving at an informed, rational conclusion.

Cricket Australia – expected to deliver its verdict this morning – are wisely conducting a thorough investigation before making any decisions.

From the information at hand, I have tried my best to untangle how things transpired the way they did, and what punishments should be doled out.

Despite frank admissions of deliberate acts against both the laws and the spirit of the game from Steve Smith and Cameron Bancroft, I still don’t believe they, or any other members of the team, are inherent cheats.

When I first heard what had occurred, I immediately thought that it was a retaliatory action to counter an opposition containing two players who have been found guilty of ball tampering on three occasions, an opposition that regularly conjures early reverse swing.

That in itself wouldn’t be a first. During a 1990 Test in Pakistan, New Zealand openly tampered with the ball because they were sure the other side was doing it. It was so effective that Chris Pringle (bowling average of 46) took 11-152 to almost win the match.

Even if you don’t believe that, there’s no shortage of players from around the world have openly admitted to tampering during their careers in recent days. Chris Lynn even went as far as saying “every cricketer” has ball tampered to some degree.

The ICC historically hasn’t thought much of the crime; the heaviest punishment anyone had received prior to Smith’s one-test ban was handed to Afridi, who copped two T20Is for chewing on the ball.

The lines between legal management, illegal-but-accepted manipulation, and out-and-out ball tampering are often blurred. ‘Artificial substances’ are not permitted, but players are informally permitted to rough up the ball by bouncing a throw in. Saliva is an acceptable polishing aid, but is technically illegal when mixed with a mint.

Several of the game’s pundits are advocates for legalising ball tampering, or at least loosening the law to settle ambiguities. Everyone seems to be doing it anyway, and if we’re being honest, reverse swing is breathtaking to watch.

Admittedly, the same could be said for the drug-fuelled Lance Armstrong era of the Tour de France. The difference is, everyone has the capability to tamper (level playing field) and no one’s health is at risk. It is also a proven antidote to the ever-growing domination of the game by batsmen. At the very least, it warrants further discussion.

It has been reported that Smith has not been in the best frame of mind in recent weeks. Don’t underestimate the toll being Australian captain takes. It’s one thing to dedicate 100 per cent of yourself to a tough craft day in, day out, quite another to do all that while steering the ship, having your every move watched, and acting as the public figurehead in times of tribulation.

On this tour alone, Smith has had to deal with multiple controversies, his first significant form slump in years, and the prospect of becoming the first Australian captain to drop a series in South Africa since 1970.

By way of comparison, Greg Chappell allegedly suffered significant mental fatigue immediately prior to the underarm incident in 1981, brought on by a heavy schedule, and admitted years later that he was not fit to captain the side at that time.

Mental fatigue doesn’t excuse cheating or bad sportsmanship, but it highlights the need to have a strong support team and dressing room culture. As vice-captain, David Warner should have been the first person to quash the idea; instead, he has been identified as the possible ringleader. Likewise, Darren Lehmann should never have permitted it, if he knew. The modern-day coach is across everything; if he didn’t know, why didn’t the players feel comfortable enough to approach him?

It was bizarre to watch Smith – otherwise apologetic – speak so bluntly about the prospect of keeping his job at the press conference, and brush it all off as a minor issue that could be easily moved past. The undertone suggested a genuine belief that it wasn’t a big deal, far removed from the reaction back home.

However he was instructed to approach it, Smith’s response spoke volumes of the team culture at present, and the apparent hubris that has engulfed the squad.

Banning players for any period of time won’t make a lick of difference if the right structures aren’t in place.

Make no mistake, Smith and Warner have made an astronomical error of judgement, for which they will deservedly suffer the indignation of losing two of the most cherished posts in Australian society, let alone sport, and possibly serve a lengthy suspension.

No matter which way you paint it, they simply cannot be trusted to lead or set the standard for youngsters around the country. But talk of life bans, particularly with such mitigating factors, is excessive. Keep it in perspective. 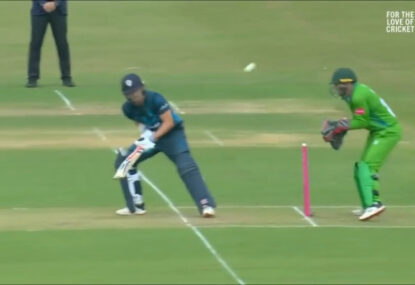