We have all been waiting for what seems like an eternity to find out just how the NRL would punish the Manly Warringah Sea Eagles for their large salary cap breaches.

Lord knows their fans have surely tried me on a number of occasions. I remember the day I first hated them vividly.

It was the height of the Super League war. The Raiders and the Sea Eagles were in opposite camps and the leading contenders in the competition. The match was fierce and the two groups of supporters were at each other all day. This match was the unofficial bout to decide which camp, Packer or Murdoch, had the moral ascendency – as ludicrously stupid as that sounds now. What stupid pawns we all were…

Manly won 16-8 and their supporters were vile in victory (we probably weren’t too good in defeat either). There was this one, fat drunk guy with a mo holding up a sign to us that read “don’t forget who made you great.” The stupidity and absurdity of that sign enraged me. “Certainly not you, you fat, silvertail so-and-so,” I thought – and probably yelled.

Lots of people hate Manly and wish them ill for similar types of reasons. I personally have recovered from my hatred since dealing with the wonderful staff at Brooky and totally coming to love Daly Cherry-Evans. I’m sure that love may be tested this Saturday as I sit on the Brooky Hill in my Lime Green… 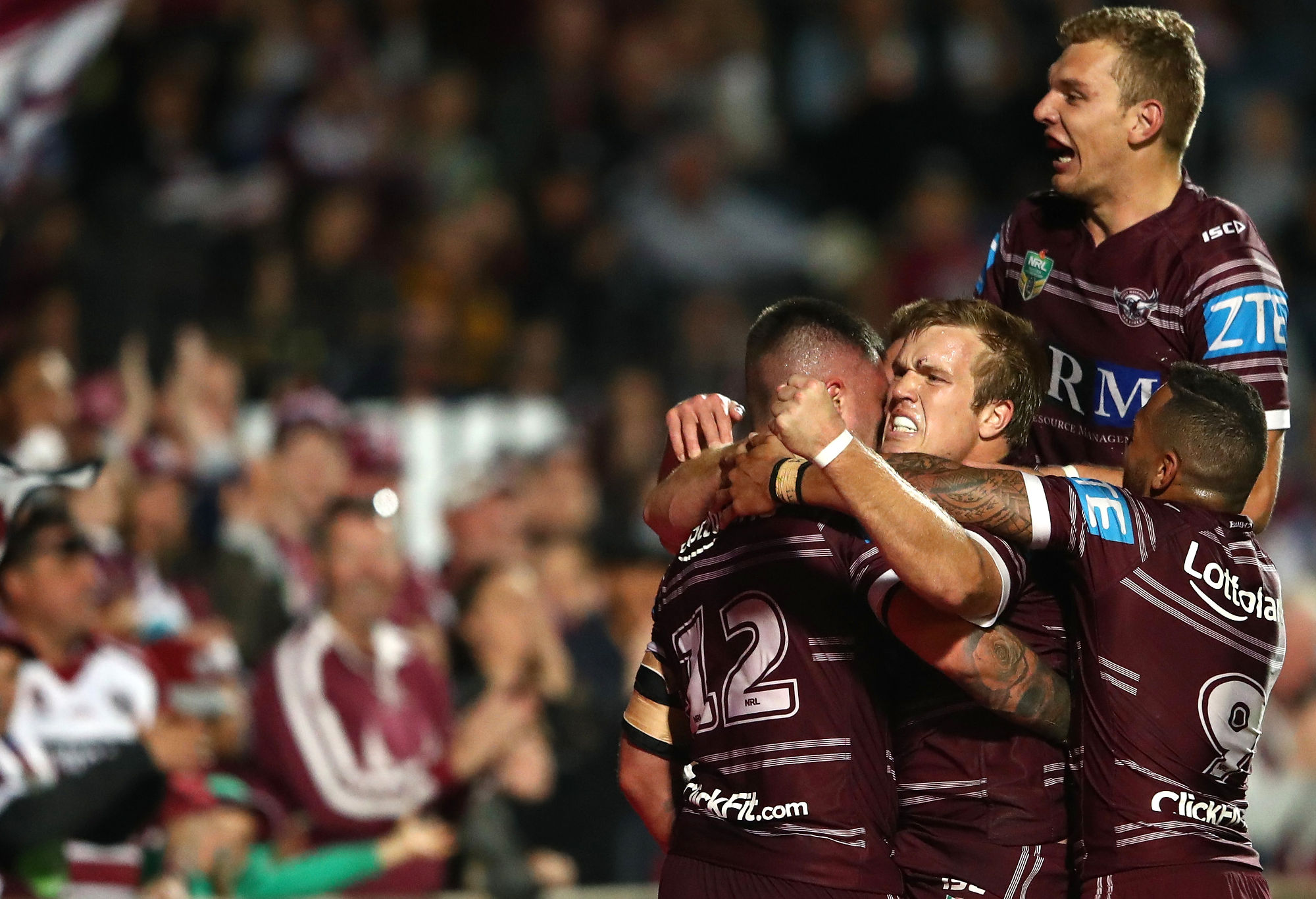 Many of those who don’t support the Sea Eagles have been hoping that Todd Greenberg would stick the boot into them.

Moving with the same alacrity that saw the Integrity Unit take the best part of two months to decide what to do about Andrew Fifita’s indiscretions, this week the NRL announced the punishment after a seven-month investigation.

It was found that the club allegedly organised undeclared third-party agreements for 15 players.

For their breaches, that totalled $1.5 million over five years, the Sea Eagles:

• must play both the 2018 and 2019 season with a squad worth $330,000 less than all the other clubs.
• have been fined $750,000
• current Chief Operating Officer Neil Bare and his predecessor Joe Kelly – now at the Roosters – will be suspended until 1 January 2019 and
• coach Trent Barrett was given an official warning.

So how do the penalties compare to those endured by the Eels and the Storm?

Why weren’t the Sea Eagles stripped points?
Unlike the Eels in 2016 and the Storm in 2010, the boys from Brookvale will not be stripped of premiership points. This is said to be because the club’s decision to release five-eighth Blake Green to the Warriors without signing a replacement saw them under the salary cap when this season began.

The Eels in 2016 were still over the cap by the time the decision came down and were deducted the points they had accrued while in that state. The Storm – who were found to have busted the cap by a massive $3,780,000 – weren’t given the option to become cap compliant so they could play for points.

Further, it has been conjectured that the NRL felt that making the Storm play for no points in 2010 was harmful to both the players and competition. As a result, that option was avoided in the case of the Eels in 2016, and subsequently for the Sea Eagles this year.

Why were the Sea Eagles fined less than the others?
This lesser amount was probably to balance out the salary cap reductions the Sea Eagles must endure that the others didn’t. Further, large parts of the Storm and Eels fines were repaying prize money. The Sea Eagles have none of that to return.

Is this salary cap reduction really a bad penalty?
Absolutely. Even though it is only the amount paid to one decent player, the Sea Eagles a) need to retain the likes of Api Koroisau and b) get their roster up to 30 players ASAP or be fined. They need two players to do so. If you play Supercoach you know how tough these sort of purchases can be, and that is just in fantasy land.

In 2002 the AFL club Carlton were stripped of their priority draft picks and it set the club back years. Some say it still hasn’t recovered.

While $330,000 only constitutes 3.5 per cent of their total cap, the Sea Eagles have a great deal of that cap locked up in one player – Daly Cherry-Evans. Further, Jake and Tom Trbojevic – rightly – cost a great deal to retain too.

The challenge at the Sea Eagles is been to surround the trio – and Martin Taupau – with the best meat and potato players they can. Doing it with $330,000 less makes that very challenging. 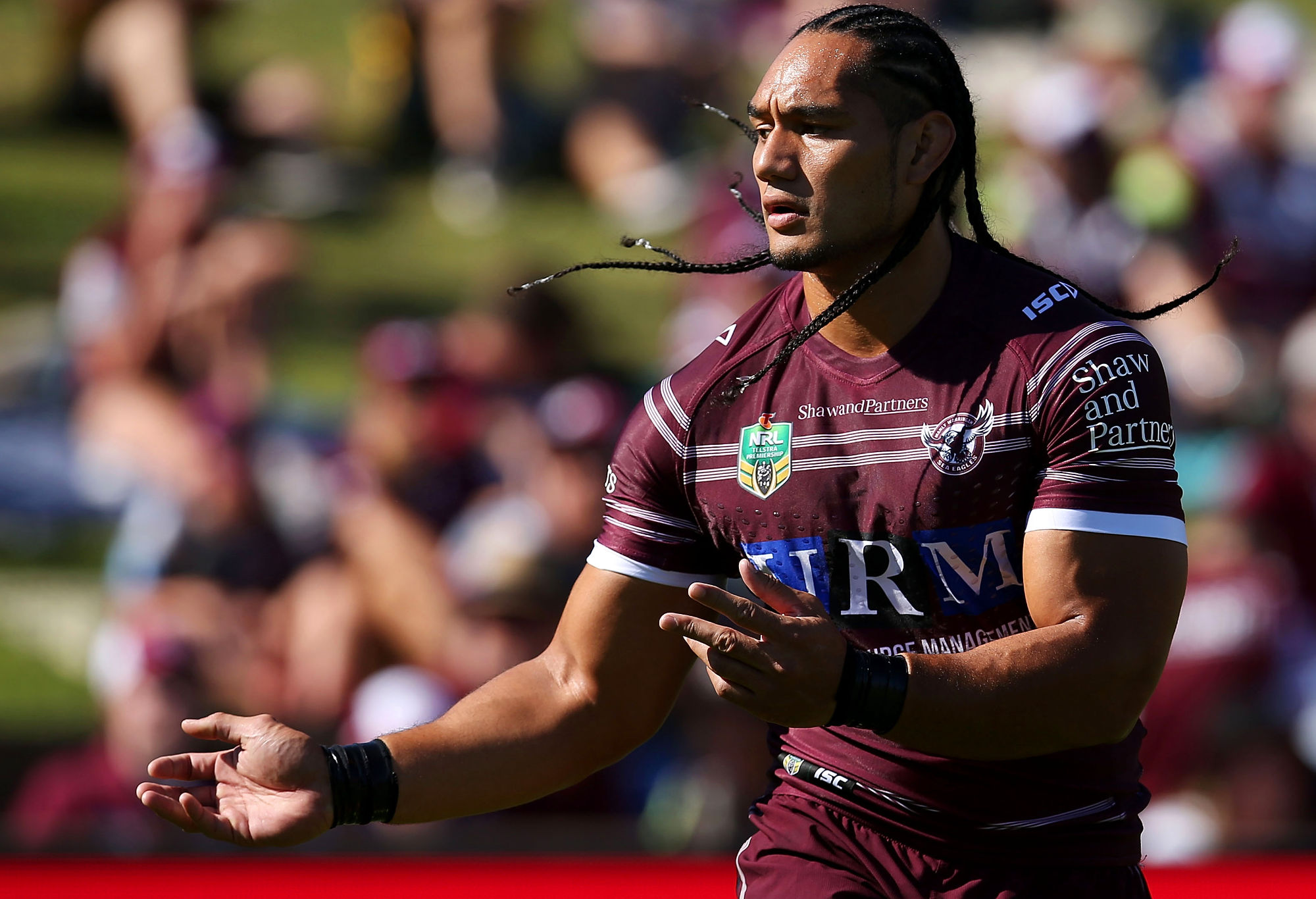 Why were the Sea Eagles officials only warned while the Eels people were kicked out of the comp?
Who knows? While those that John Hartigan named as responsible for the Storm’s cap breaches left the game, the five at the Eels were ejected by edict of the NRL. The suspended Joe Kelly, Neil Bare and the warned Trent Barrett seem to be the only ones held responsible for the Sea Eagles’ breaches, although Immortal Bob Fulton has been implicated – something he vigorously denies.

However, do the differences in this part of the punishment really irk the majority of fans? Probably not.

Lastly, the Sea Eagles had no titles to be stripped of.

Overall, it seems that the penalties are all fairly even when all things are considered, with the Storm’s inability to play for points in 2010 probably the harshest measure seen.

Given this, if you think Manly has been let off lightly it is most probably just because you hate them.

Now, to other matters…

Ash Klein being dropped for doing his job well is a travesty
The very worst thing that happened regarding the penalty awarded to the Broncos last Friday night by referee Ashley Klein was not that it was an anti-climactic way to end the match, and it was not that it was questionable whether it should have been awarded.

The very worst thing that occurred was that Bernard Sutton hung Ash Klein and Matt Noyen out to dry and, in doing so, has very possibly smashed the morale and confidence of the match officials.

Our beloved game must have confident and well-supported match officials. They are crucial to the effective running of the game.

We cannot continue to just examine their performances in the isolation of individual matches or incidents. That’s treating the symptoms and not the disease.

And that elite performance is what we all demand. However, if we don’t also demand that the structure they operate in is conducive to high performance then what possible right do we have to complain when the officials get things wrong?

That Klein had the guts to award a penalty at that point in the game speaks volumes about his courage to enforce the rules in situations of great pressure.

That is the kind of referee I want.

Klein should be applauded and lauded for being prepared to call the game as he saw it. Instead, he and Noyen have been shamed and demoted.

For Bernard Sutton to do that to Klein, when he showed such courage – and after Todd Greenberg himself came out and said that he had instructed more penalties to be awarded in each match – is dreadful.

In what scenario does any referee now have the confidence to award a penalty, or the confidence not to? How can we possibly expect them not to be paralysed?

The elite match day officials have extremely limited career paths. They either have the NRL – which controls all pathways through the NSWRL and QRL – or they can uproot and head over to the English Super League – which Klein himself did at the start of his career.

That’s it. Unlike the players, transferring to rugby union at the equivalent level isn’t an option.

However, after these elite officials have worked their guts out to get to the top grade they end up under the charge of the people who have managed to score themselves plum jobs at NRL HQ.

And just how Bernard Sutton got his present role is anyone’s guess.

Did anyone see the position advertised? Was there a competitive process? Was there a selection criteria and a panel that shortlisted and interviewed candidates?

Or did he just get arbitrarily appointed? 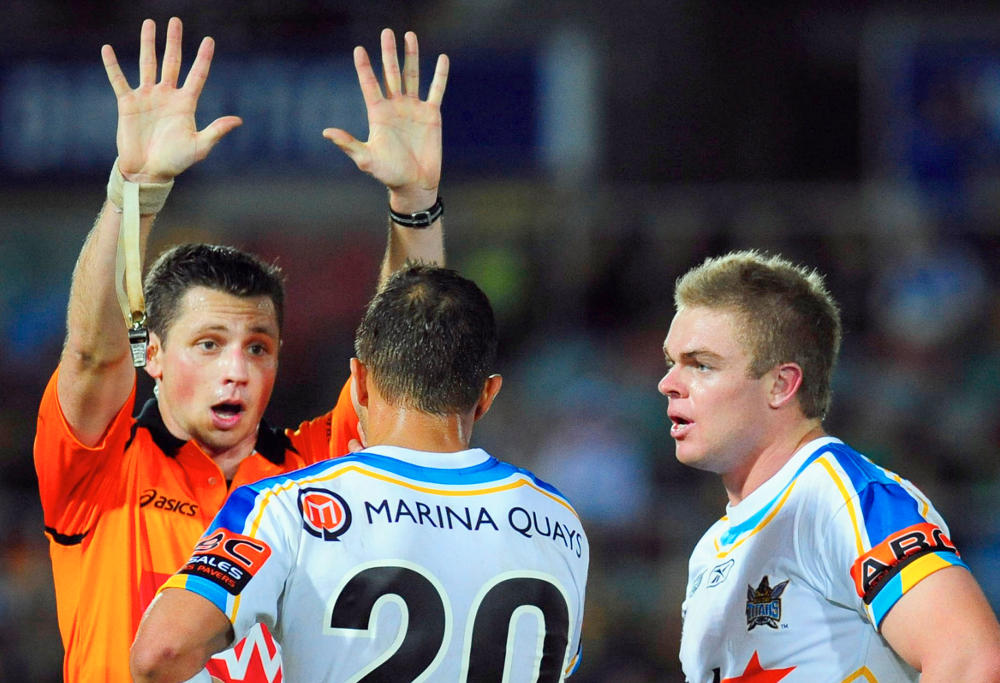 I asked Glenn Jackson, the NRL Media manager, to answer those questions. I have received no response whatsoever from Jackson – yet again.

If no process occurred, and I have been unable to find evidence of one, then how are we supposed to have any faith that Bernard Sutton is the best person for the job?

That concern is compounded when he treats one of his most experienced referees in the manner he has Klein.

In my opinion the leadership of the NRL officials is one of the most broken things about the game. How on earth can we expect the referees to do their jobs well when this is the support they get?

On one hand, Greenberg is telling them to award more penalties, on the other we’ve got Bernard Sutton publicly saying – with no requirement for him to do so – one of his most experienced referees got a decision wrong and then demoting him – and his partner to boot.

There is lots of evidence to support the penalty being awarded. Only the most hardcore and parochial fan could argue otherwise. There was a clear and strong argument to defend Klein and Noyen – and through that defence – assert the imperative of the referees to control the game.

What does Sutton – or anyone, for that matter – even gain from his approach?

It doesn’t reverse the result, it doesn’t inspire confidence in the referees and it’s not consistent with Todd Greenberg’s own directive.

The only thing it does for sure is makes clear to every referee and touch judge that they are on their own.

So here’s the takeout for the match officials from this latest fiasco:

Got that? Straightforward, right?

So here’s the take out for fans, coaches and administrators of the 16 NRL teams: stop focusing on the individual incident in isolation and demand that the officials get the best possible support and structure so that they can do the best possible job – that includes ensuring there are the best people for the job in charge of them.

And if you don’t do that, if you keep on looking at every game and decision in isolation, when you whinge about every decision that doesn’t go your way you’ll have no one to blame but the person in the mirror.