“Acts such as these must be obliterated from the game, and I’ll begin by obliterating you.”

These are legendary words that then judiciary chief Jim Comans uttered as he handed a record 15-month suspension to Western Suburbs second rower Bob Cooper in 1982. Cooper had run in to support his teammate Paul Merlo, who had just been hit by Steelers prop Greg Cook’s cocked elbow. The subsequent brawl at the Wollongong showground saw Cooper break Steelers’ winger Lee Pomfret’s cheekbone and nose as well as breaking Cook’s jaw.

Todd Greenberg’s current crackdown on infringements has its parallel in Comans efforts to clean up the game in the early eighties.

While the effort to remove endemic thuggery from the game may seem a world away from cracking down on the rampant stretching of the rules that has pervaded the game over the last decade, both situations have one thing in common: they require a determined leader to make it happen.

The majority of us are hoping that Todd Greenberg can be as effective in this current crackdown as Comans was in the early eighties.

Fights were common in rugby league in those days. The culture of cheap shots mixed with the ethos of sticking up for your mates saw lots of escalation.

Early on in my rugby league supporting days I was shocked by the brawl in the 1981 Newtown Jets-Manly Warringah Sea Eagles semi-final. In particular I found Steve Bowden smashing three colours of shite out of Mark Broadhurst just horrible. It was brutal and ugly and horribly human. It was stuff better kept to the sort of seedy pub car parks that any decent person avoided.

These men frightened and repulsed the 11-year-old me. It was little wonder that my main sports of choice were Aussie Rules to watch and soccer to play. What kid would want to play ‘thugby league’?

I’m certain that the powers that be at Phillip Street understood that my reaction – and that of my parents – was becoming a prevalent view. Rugby league was ugly. It had to be fixed.

When Jim Comans obliterated Bob Cooper he clearly signalled the intention of the game’s then powerbrokers that the ugly era was going to end.

One of the journalists in that room covering it was a young Phil ‘Buzz’ Rothfield. While the 15-month suspension was unprecedented and lots were openly opposed to it, Rothfield had the courage to support it. Perhaps he recognised that a change had to happen, that a firm stand had to be made to achieve it.

If you look in the background of the Bowden/Broadhurst incident you’ll see a very young and very concerned looking Phil Gould pulling players apart. Fighting and cheap shots were never his go. Foundation Raider Angel Marina always told me of Gould that he was a fair player and a good bloke.

Rothfield’s tweet – note also the response from the NRL Media account – shows that those who are opposing the right of the referees to enforce the rules of the game are the same people who once were the ones most likely to back necessary change.

Now it seems that Buzz and Gus may not be able to see woods for the trees.

Also interesting that 93 per cent of respondents to the Daily Telegraph survey said the referees should hold firm.

The Comans crackdown did not end with the Cooper suspension. The Phillip Street hierarchy had to stay strong to ensure the culture changed as there were many who thought that it might be a passing phase.

When Les Boyd brutally smashed Darryl Brohman’s jaw in State of Origin One 1983 referee Barry Gomersall did not even send him off. The incident only garnered a penalty.

Further, he wasn’t even charged by the NSWRL. In fact he was selected to play for Australia the following day.

It took the Panther’s club secretary to cite him and bring Boyd before the judiciary. When Comans suspended Boyd for 12 months there were many who felt that the punishment was way too harsh. That included NSW coach Ted Glossop, who appeared on behalf of Boyd’s defence.

However, Comans stood strong. His actions were pivotal and central to the game of rugby league being cleaned up. That clean up ushered in the best period that rugby league has ever experienced and its popularity has duly sky rocketed.

There are many cancers that afflict our beloved game right now. One of them is that over time the rules of the game have been allowed to get pushed and bent to the point that negative, spoiling tactics have become the norm.

Ask most fans what they really hate in the game and they’ll tell you things like wrestling, holding down the tackled player, strategic peel-offs, hands in the play the ball, blocking kick chasers, incorrect play the balls and of course offside play.

All of these things have been used by coaches as strategies to slow their opponents’ attack and allow the defence to reset and prepare, and the referees have allowed it to happen.

The 400-game man Craig Bellamy has been at the forefront of many of these tactics. I don’t say that to malign him; his job is to get his team to win. He, like any good coach, will push and probe the edges of the rules to try and get an advantage. There has been no-one better at it. And if it works, then he’d be a fool not to do it – and it has worked.

However, many of the game’s fans have really tired of those negative tactics being the norm.

It is the job of the governing body to ensure the game’s health. The eight and then six-tackle rules were brought in partly to stop the St George Dragons total dominance of the game. Warren Ryan’s tactic of getting repeat sets by bombing into the in-goal and trapping the defenders was remedied by allowing a tap from the 22 if the ball was caught on the full.

However, in the last decade the emphasis has clearly been on game flow. As I’ve shown in analysing how marquee games are officiated differently, game flow has been seen as far more important than actually officiating the rules correctly.

However, that has led to more and more boundaries being pushed back by the teams. As that has happened more and more fans have begun to rail against the officiating for allowing it to happen.

All that’s really necessary to drive out all the negative defensive tactics that slow the game down is to enforce the rules. And that is what Todd Greenberg is doing.

I have not been a fan of many things Greenberg has done, but I’m a huge fan of this crackdown – and, as far as I can tell, so are the great majority of the fans. Further, I loved that Greenberg has personally owned the initiative. The buck has stopped with him. That’s how a good leader operates.

Greenberg needs all of our vocal support right now.

Why? Because the likes of Rothfield and Andrew Johns are attacking the crackdown. And make no mistake: they may be out of step with the majority of fans on this, but they have huge influence.

Absolute bullshit. Nothing wrong with the game last year. @Todd_Greenberg is destroying the game. It’s not the refs. They are carrying out Greenberg’s orders. https://t.co/QEOsq9apvJ

Their stance is in spite of a Daily Telegraph poll showing that 93 per cent supported the crackdown. It is what the fans want. A lot of other influencers want the crackdown to continue too. Bill Harrigan, Gorden Tallis, Wayne Bennett and Paul Kent have all come out in support of it.

The reaction on social media – as well as at Shark Park – when Cam Smith was sin binned was one of disbelief and jubilation (Dane Eldridge’s take on the incident is a must-read). That it was done by the number one referee, Matt Cecchin, told me that the NRL meant business.

Like the Jim Comans crackdown, this emphasis on enforcing the rules must continue until sides adapt their style of play so the ascendancy switches back to attacking, positive football and away from negative, slow-down-the-game management.

However, if the crackdown is to have the desired lasting effect, it must be partnered with more sin-binnings.

We’ve seen that sides can still win while losing the penalty counts. However, a sin binning really hurts a side, and the real threat of a player spending ten on the pine is the sort of thing that causes real changes in game strategy. 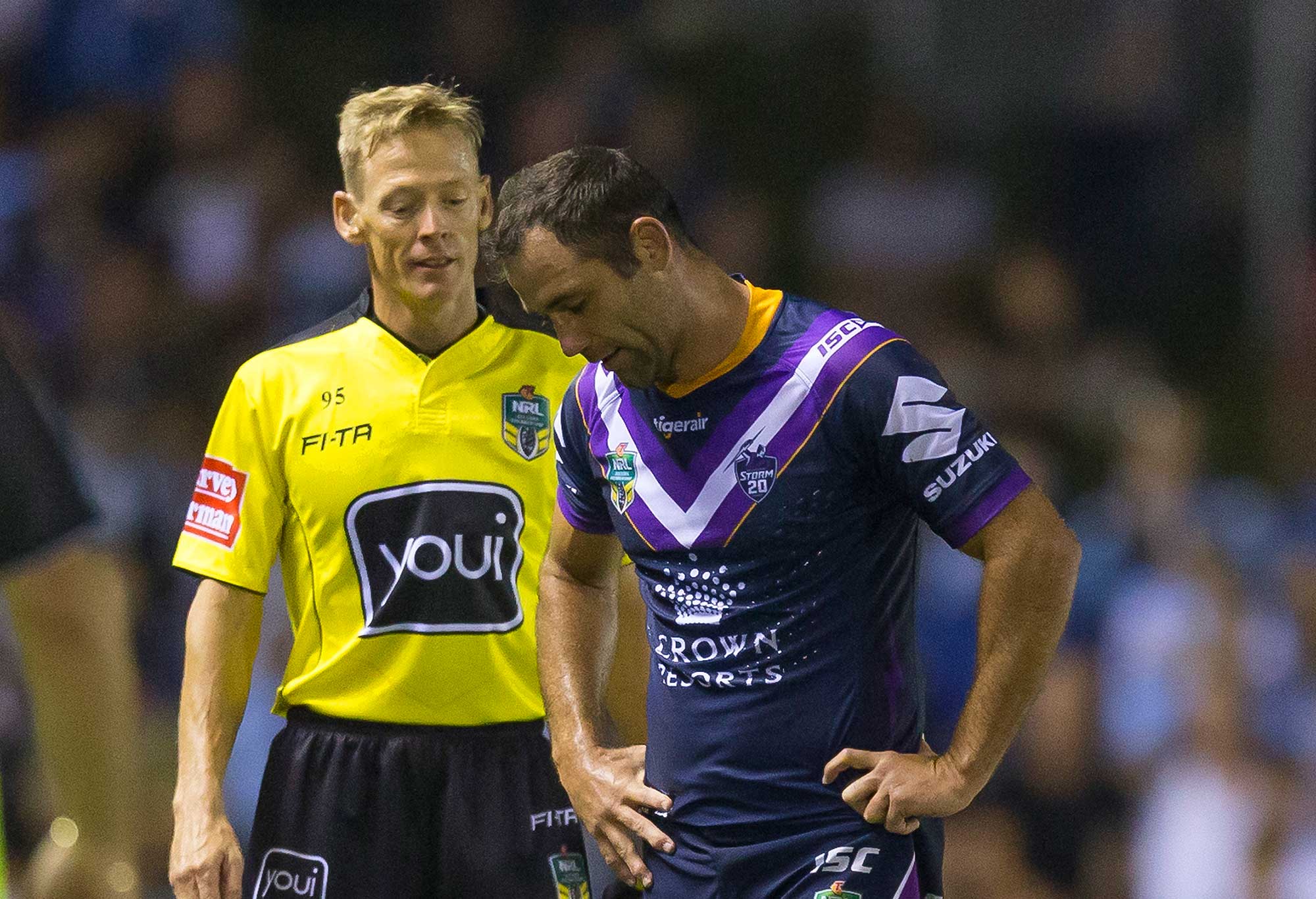 The good news is that the NRL is on the same page in this regard, as this statement from an NRL spokesman shows:

“The referees will continue to be vigilant when it comes to penalising players for offences including not making a genuine attempt to play the ball, as well as for being offside. And in instances where there have been repeated infringements involving specific offences and under certain circumstances, referees can and will use the sin bin.”

I beseech Todd Greenberg to stay strong in this crackdown and to up the ante by directing his referees to use the bin even more to give it real grunt.

I implore fans to tweet their support to @Todd_Greenberg and @NRL so they know that you are behind them and they are emboldened to stay the course.

And while you are at it, tell @BuzzRothfield that you are behind Todd too.

But when you do, don’t forget that Buzz was once a man who backed Jim Comans at a vital point when change was needed.