If I asked you to describe some of the qualities the best athletes and sporting identities possess, what words would spring to mind?

On many occasions, some of Australia’s premier athletic talent have been labelled with that term, ‘magical’.

While the label is in no way malicious, it can rob an Indigenous player of true praise, as their talents are often misinterpreted to be instinctive or innate.

A few examples include Richmond’s Daniel Rioli, whose play was likened to magic many times on a variety of media platforms over the course of the AFL Finals Series. 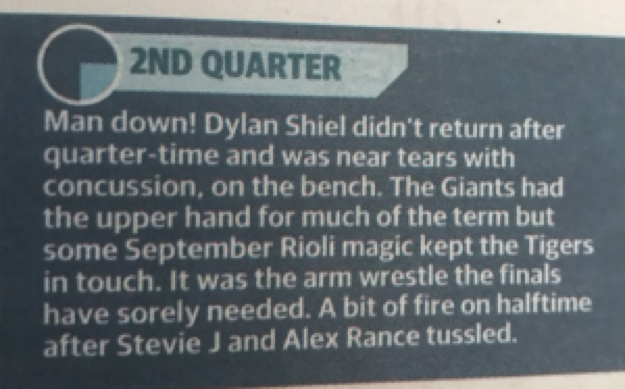 While the premiership star’s Goal of The Year achievement will forever contain the line: “we’ve just witnessed some magic there.”

Leila Gurruwiwi, host of the Marngrook Footy Show shares some of the stereotypes that Indigenous AFL players face.

“There’s this perception that all Indigenous people have some sort of magical flair that helps them with their ability to play AFL football,” says Gurruwiwi.

His performance in the 2017 AFL grand final, was no different.

Betts wins a free kick in the forward 50. Immediately commentator Bruce McAvaney questions, “what does he do from here, the magician?”

Just one of the many examples of his talent being regarded as a supernatural ability.

Just two games later for Betts in Round 2 of the 2018 season, McAvaney makes a similar comment.

“Eddie’s done some good things tonight. But the magic is missing at the moment for Eddie.” McAvaney said, in the last quarter of the grand final rematch between Adelaide and Richmond.

Betts had 20 disposals for the game, while failing to hit the scoreboard in the victory.

The creative small forward is known for kicking what seem like the impossible goals.

After multiple 50 plus goal seasons, a rarity for some key power forwards, Betts will go down as one of the greatest small forwards in the history of the game.

Betts highlighted in a video package how he kicks some of his most impressive goals from the boundary line. He explains his technique in the video below.

The definition of the term ‘magic’ is ‘the power of apparently influencing events by using mysterious of supernatural forces.’

There’s nothing magical about Eddie Betts’ impressive techniques as he credits training and practice for his goal kicking abilities.

But this label of being ‘magical’ leans to the idea of him just showing up on game day to make goals appear from thin air.

Nick Apoifis, lecturer at the University of New South Wales (UNSW) at the School of Social Sciences, notes that this seems to be a common occurrence with Indigenous Australians.

“You don’t really see it as much with non-Indigenous players … we usually tend to celebrate how hard they worked,” Apoifis said.

“What we started looking at was the way in which certain athletes are represented. This led us to the discussion of an innate sporting ability among Aboriginal athletes,” says Apoifis.

“If you’re a young aboriginal kid and you’re looking for role models, you have very few role models that are politicians, doctors or lawyers. Certainly, there are, absolutely. But it’s much more likely that your role model is going to be an athlete so that is why you’re more predisposed to come into sports.”

For example, four of the eight Aboriginal and Torres Strait Islander Australians of the Year have been sportspeople.

Apoifis highlights how this stereotype runs far deeper than just the media coverage of Indigenous athletes.

“It revolves around this idea of positional segregation. Where a player is assumed to be better at certain positons based on their ethnicity or ‘race’,” says Apoifis.

‘Noble Athlete, Savage Coach’ highlights that the commentary surrounding speed, flair and ‘magic’ as qualities of an indigenous athlete in team sports can lead to the perception that they are suited to positions characterised by pace, trickery and spontaneity, rather than those that utilise leadership acumen and intellectual skill.

“They use to call him the ‘Black Pearl’, and there were signs and banners that fans would put up saying ‘black magic’.

“They were trying to celebrate the player but underlying that is this thing that it (Hanley’s talent) is innate,” says Apoifis.

Gurruwiwi highlights how the term ‘black magic’ has not always been used for praise.

“If you look up the connotation of ‘black magic’ it’s actually seen as a bad thing … I find it quite interesting that it’s kind of been put on the flipside and now seen as a good thing,” says Gurruwiwi.

“A nickname that neatly defines both his otherness (his rarity, the fluke nature of the black rugby league player) … the nickname is expressive of Hanley’s unique abilities and at the same time expressive of the colour of his skin.

“If you’re saying to someone that you are innately good, what you are actually also doing is denying the immense amount of training and commitment that these athletes have put in. The hours and hours of training to get to that elite level.

“What we’re not discussing is the Aboriginal players that didn’t make it … We only look at the ones that did make it.” says Apoifis.

Some Indigenous AFL players have embraced the ‘magic’ label.

However, former Melbourne forward Liam Jurrah asked not to be referred to as the ‘Walpiri Wizard‘ in the same manner that Demons supporters had nicknamed fellow Indigenous star Jeff Farmer.

“I think it’s really each to their own,” says Gurruwiwi.